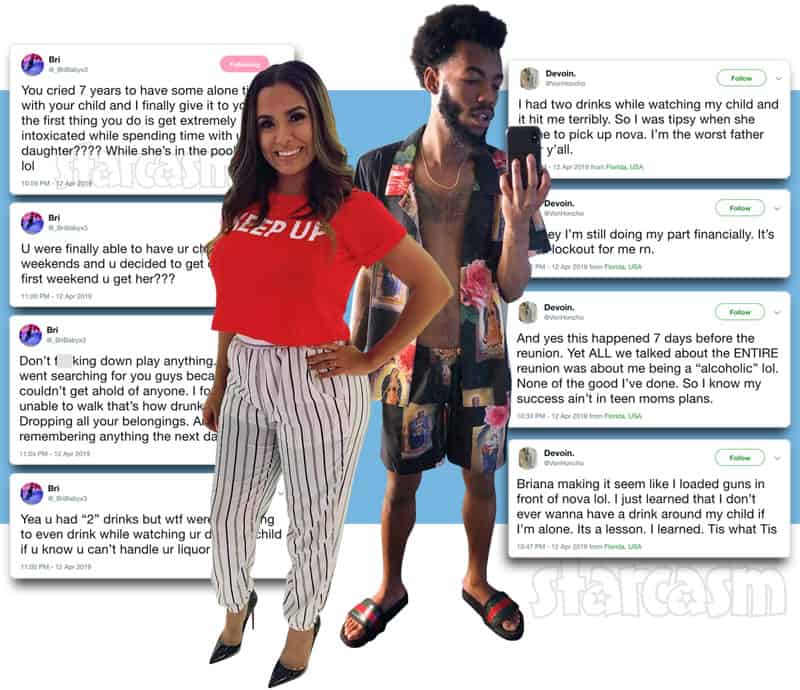 Shortly after we shared our post about why Briana DeJesus will no longer allow her ex Devoin Austin to watch their daughter alone, the two took to Twitter and confirmed the report was accurate as they got into a VERY heated back-and-forth over how serious it was.

In case you missed it, an audience member at the Teen Mom 2 Reunion taping in New York City this past weekend revealed that Briana was upset at Devoin for drinking while having an overnight with their daughter Nova. He was reportedly quite drunk as he was watching Nova alone near a swimming pool. (Click the link above for all the details.)

Briana had initially stated that she didn’t want to reveal why she was mad at Devoin. She simply tweeted that he “f**ked up big time” and “Nova is never allowed to be with him alone again.” But, once the cat was out of the bag about what happened, she was willing to talk about it — a lot.

Actually, it was Devoin who first took to Twitter to defend himself after the story broke. It was his comments more than the facts of the story coming out that really seemed to anger Briana.

I had two drinks while watching my child and it hit me terribly. So I was tipsy when she came to pick up nova. I’m the worst father ever y’all. But hey I’m still doing my part financially. It’s just a lockout for me rn. And yes this happened 7 days before the reunion. Yet ALL we talked about the ENTIRE reunion was about me being a “alcoholic” lol. None of the good I’ve done. So I know my success ain’t in teen moms plans. And in other words y’all. It’s gon be al-thef**k-right.

Someone responded to Devoin’s tweet about having two drinks by declaring sarcastically that she was calling the cops. That’s what first caught Briana’s attention. “Lol this isn’t something to joke about. And he was extremely intoxicated while watching his daughter at the pool,” Briana replied.

Briana making it seem like I loaded guns in front of nova lol. I just learned that I don’t ever wanna have a drink around my child if I’m alone. Its a lesson. I learned. Tis what Tis. I drank WAYYYYYYY more in Puerto Rico by the way. I was rippppped alll trip and it wasn’t a issue tho. Really wanna kno wtf would make her think I would even want to do that again lol

“Just shut the f**k up,” Briana replied directly to Devoin, but he didn’t heed her command.

I feel like a Teen Mom 2 producer trying to get between Briana and Kail at last year’s Reunion. Unlike those producers, I’m just gonna step back and get out of the way. Here is most all of the rest of the tweets from Briana and Devoin, as well as the relevant third party tweets…

DEVOIN: I’m just sick of seeing people wondering lol she made it seem like I loaded guns and did drug transactions in front of nova. No. I did something millions of Americans have done

TWEET: She’s f**king crazy!! I feel like she was just looking for excuse to get mad and prevent alone time so she can b*tch about doing it all. She’s perfect???

DEVOIN: She couldn’t wait lol. But yea aigh. I guess this is good for the season.

BRIANA: I was just looking for an excuse? Lol what? You cried 7 years to have some alone time with your child and I finally give it to you and the first thing you do is get extremely intoxicated while spending time with ur daughter???? While she’s in the pool at that lol U were finally able to have ur child on weekends and u decided to get drunk the first weekend u get her??? Don’t f**king down play anything. When I went searching for you guys because I couldn’t get ahold of anyone. I found u unable to walk that’s how drunk you were. Dropping all your belongings. And not remembering anything the next day smh

BRIANA: Yea u had “2” drinks but wtf were u thinking to even drink while watching ur ducking child if u know u can’t handle ur liquor? Not only do I feel disrespected but I am disappointed because I gave you my f**king trust. What if my child drowned???????? I expected to get nova and for her to tell me she had a BLAST but she told me her father was distracted. How can I ever trust someone who put my child in danger??

BRIANA: I don’t forgive you because you are down playing and trying to justify things. U can’t own up to something and have a whole bunch of “buts” in the same sentence. U are only sorry u got caught.

TWEET: Was he like blacked out or just enjoyed a drink or two? Bc honestly, i drink a glass of wine or two on a Friday night & still take care of my son just fine. Not drunk, not tipsy, nothing. Just relaxed.

BRIANA: He was drunk!!!!!!! He couldn’t walk straight and kept dropping all his belongings, he broke his phone, doesn’t remember anything from that day, hurt himself and all.

BRIANA: Never in my life will I ever get intoxicated in front of my kids if I’m alone with them. Neverrrrr. It all goes back to what if something happened to nova? What if I came to pick her up an hour later than I did. There’s so many things that could have happened. Your phone died. U don’t drive. U don’t have a license. Ur drunk. How were y’all gonna get home???? Thank god my mothers intuition kicked in.

#TeenMom2 @_BriBabyx3 says Devoin "f**ked up big time" and "Nova is never allowed to be with him alone again." So what did Devoin do?! A Reunion attendee spills the tea! ?? https://t.co/z5WENyhJHn

DEVOIN: Sad? Lol it’s alright lol. She’ll get over it.

BRIANA: Lol “she’ll get over it” lmfao ok

BRIANA: Lockout? I never said u couldn’t see her, I said u couldn’t be alone with her. And u help financially? Lol u pay 60 bucks for her after school care goodbye fool. If you are gonna tell a story, tell the truth.

BRIANA: I get it, you feel like the man, you finally got ur child for the weekend and u wanna celebrate. Do that sh*t when she’s not around. U got drunk while she was swimming in the pool

BRIANA: I’ll probably get in trouble for this rant but I said what I said ?

TWEET: He shoulda been playing with her in the pool doing sh*t she will remember like marco polo or doing handstands.. Now all she will remember is that the first time her dad got to spend alone time with her he chose to get drunk. Sad.

BRIANA: Nova has taken many swimming classes when she was younger. I’m proud to say she’s not scared of the water anymore but she is not a pro swimmer and she panics fast. If you were a real parent, you would know to keep an eye out on her. Stupid f**king piece of sh*t. But I’m the crazy b*tch who b*tches about everything ??‍♀️

TWEET: Does this make you not want to film next season? I think you should talk to a lawyer about going to court and getting set visitation. No reason they can’t drop her off, or you Uber to get her. You need to make sure you have your rights

DEVOIN: Nope. They pay me and nova for the season ima take that. But I just gotta make better choices. I f**ked up

TWEET: honestly they just look for a reason to hate men… Brittany’s cool though

TWEET: Just look at it from her perspective if she was drinking alone with nova and got a lil tipsy or even if nova was around people that u know and bri wasnt there u would probably react the same way from what ive seen on the show u been doing an excellent job keep that sh*t up??

DEVOIN: Yessir. I don’t blame her. But I own up to whEre I f**ked up. Appreciate it tho ??

What do you think? Is Briana justified in lowering the boom on Devoin as far as future alone time with Nova? Even Devoin admits that he had “two drinks while watching my child and it hit me terribly.” If Nova really was swimming, or even next to a pool, and it was just her and Devoin, then I am 100% on Briana’s side on this one! And avoiding that situation isn’t like knowing how to change a diaper or picking a kid up from school, it is something that even a first-time parent should know without having to learn.