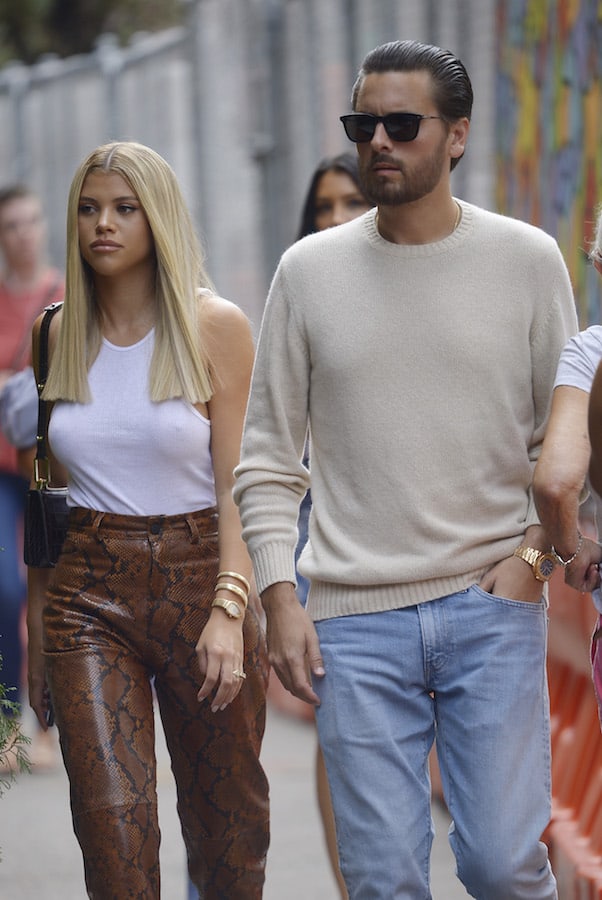 It looks like there’s only one thing on Sofia Richie’s Christmas list, and she’s not shy about sharing it. Gossip about Scott Disick and Sofia Richie engaged has resurfaced something fierce with the approach of the holidays, thanks to what looks like Sofia’s PR team arranging yet another story about how she’s ready for a ring.

Devotées of the least-likely Kardashian-adjacent love story will recall that Sofia tried a similar tactic a couple of months ago, when she wanted Scott to let her move in. That story had the added benefit of lining up Kourtney Kardashian as an ally; Kourtney was said to “love” the idea of her ex and Sofia “ma[king] it official” by living together because if Scott is in a happy place, he’s a better father to their three children.

And now September’s well-placed story is bearing November fruit, persimmon-style, since Kourtney’s blessing is one of the big selling points Sofia’s people are using for the current Scott Disick and Sofia Richie engaged gossip. Life & Style has the story:

“Like most couples, they have their ups and downs, but those close to them wouldn’t be surprised if Scott pops the question next year,” a source tells Life & Style exclusively. “He’s been saying Sofia’s ‘The One’ for a while now.”

In addition to Scott’s strong feelings for the 21-year-old model, he’s also gotten the stamp of approval from ex Kourtney Kardashian and her family.

…In fact, Kourtney has even encouraged the pair to move in together.

“Kourtney would love it if they lived together and made it official because she thinks that Sofia is really good for Scott and when Scott is good then she knows the kids are good and that’s all she cares about,” an additional source told Life & Style in September.

Furthermore, Kourtney truly views Sofia as “a part of the family,” according to Us Weekly. “Kourtney and Sofia share a common background and lifestyle, and Sofia is easy to get along with and is a normal girl,” an insider told the publication of their unlikely friendship.

Unlike some other reality stars, Scott really doesn’t seem like the type to get sentimental at the holidays. I wouldn’t be surprised if the next story in this gossip cycle leans more on how these two have supposedly been talking about getting engaged since at least June. That timeline of course reinforces the fact that they’ve already been together way, way longer than literally anyone expected. I’m willing to go to the mat for that “literally.” If Scott had married Sofia right when they started dating over two years ago, it would have been an impulsive rebound decision and nothing more. If he proposes to her now, it would actually…make sense?