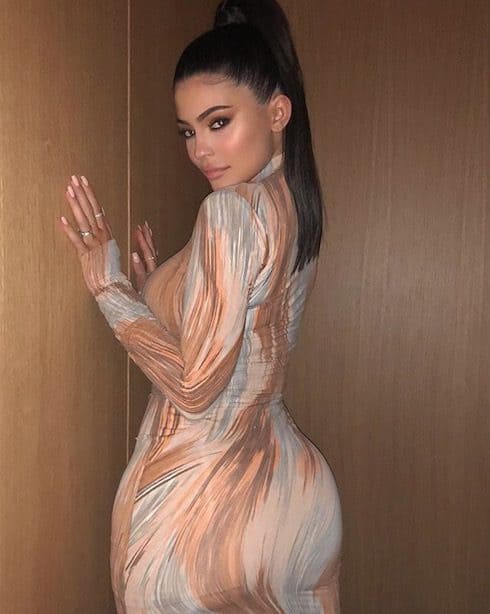 It hasn’t been long since Kylie Jenner gave birth to her first child, but the 20-year-old fashion maven is apparently ready to have another. Reports of Kylie Jenner pregnant again — or that Kylie is supposedly “ready and eager” to be pregnant once more — have given rise to a wave of speculation about Kylie’s uterine status.

Kylie, who gave birth to Stormi Webster on February 1st, is said to be responding to persistent rumors that she got pregnant by someone other than baby daddy Travis Scott by suggesting that she and Travis simply get pregnant again in order to prove the world wrong. (ICYMI, last week social media was abuzz with the possibility that Tim Chung, Kylie’s former bodyguard who is also hot, may have fathered Stormi, because the two of them kinda-sorta look alike in photo comparisons like these.)

Talk of Kylie Jenner pregnant again appears to have begun with Hollywood Life’s article on Kylie “want[ing] more babies with Travis Scott to prove he’s Stormi’s dad.” Because apparently, thanks to the Travis / Tim Chung drama and the fact that Tyga allegedly demanded a paternity test a few weeks ago, Kylie is all out of freebies.

HL’s anonymous insider alleged that “Kylie is hurt with all the talk that Travis isn’t the father of her child and the only thing she thinks she can do about it besides saying the truth is to have more babies with him.” (Or just wait for Stormi to grow and look more like her parents — but, in the immortal words of George Carlin, we don’t have time for rational solutions.) Kylie “wants to make it known she wants more children and she wants those children with the same father no matter what anyone else says or theorizes.”

Again: simply deciding to have more babies may be kind of an extreme solution to this non-problem. But being an ascendant billionaire — and Kylie is still on track to become one by her 21st birthday this summer — creates its own kind of bizarro logic. Kylie is so rich that she doesn’t have to worry about the practical, day-to-day consequences of motherhood; she has a literal team of round-the-clock nannies to help with that.

So, while Kylie no doubt loves and cherishes her little girl, she’s also completely insulated from the most time-consuming consequences of having one. Which means having another one (or two, or three, to carry on her business empire Kris Jenner-style) is as easy as deciding to get down to it.

Speaking of which, among Kylie’s Mother’s Day gifts for Kris was this balloon ensemble; we can’t help wondering if Kylie actually intended it for herself: 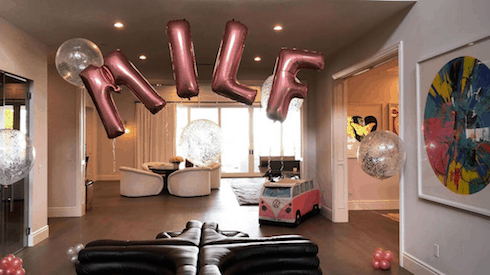 (Also potentially fueling her decision is fact that Kylie has a 20-year-old’s energy. Maybe I’m alone on this one, but this point in my humble blogger’s life I would honestly rather have her energy than her money.)

Plus, when she’s not busy allegedly having some quick post-pregnancy plastic surgery to get back in bikini shape, Kylie is the subject of feel-good article about how good she makes being a mom look. Witness, for example, this People puff piece, the headline for which declares “She’s a cool mom.”

Among the reasons? Kylie refused to trade in “designer luggage for diaper bags”; she rocked a $1,600 suitcase for her recent trip to Turks & Caicos. She “take[s] walks around the neighborhood with baby Stormi” in a $12,500 pram. And, last but not least, she “accept[s] herself as a cool mom.”