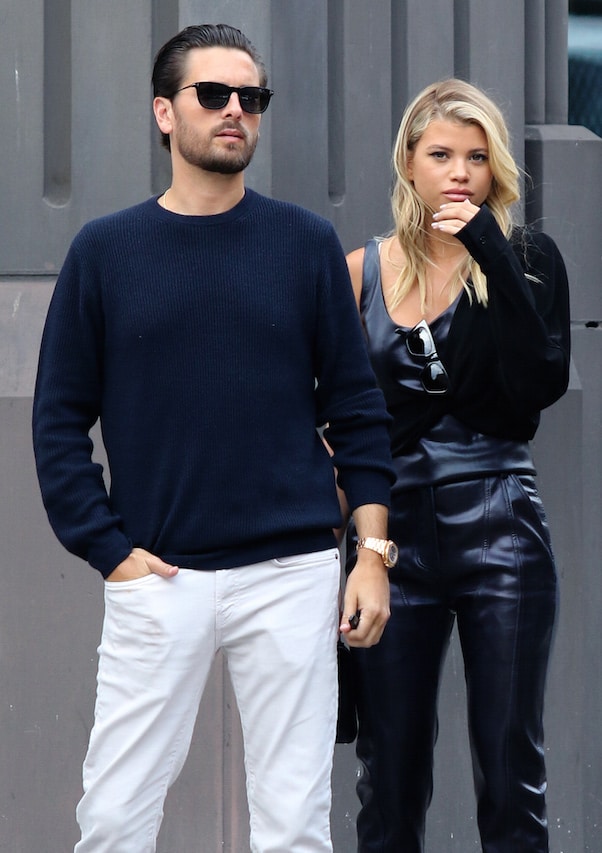 The latest round of gossip in the unending story of Kourtney and Scott and Sofia has members from both sides trying to get Sofia Richie living in Scott Disick’s house. This may sound like a small thing, until you remember — and I sure forgot — that these two have been dating for *two whole years.* Literally no one on earth expected the last teenager Scott shacked up with during his Summer 2017 Revenge Sex World Tour to become a serious girlfriend. But here we are, actually into the third year of their relationship by a few days, and well past the point where we really do have to take the two of them seriously.

As for the latest turn in the drama of pleasantness between Kourtney and Scott and Sofia, two separate sources talked to Life & Style about the likelihood of Sofia moving in with Scott after having dated for this long.

The first of the two said that apparently the idea has Kourtney’s blessing: she “would love it if they lived together and made it official because she thinks that Sofia is really good for Scott.” But it doesn’t really have anything to do with Scott — understandably so, since it’s all about the kids. “And when Scott is good,” the source went on, “then [Kourtney] knows the kids are good and that’s all she cares about.”

The second source gushed about what a good influence Sofia would be because she remembers to buy toilet paper. Check this quote out:

Sofia will make sure that his house is stocked with things like toilet paper or paper towels and toothpaste. She doesn’t look at it as a job, she loves taking care of him. In the beginning, I think she felt pressure because [Kourtney] always has everything in order — has schedules planned weeks and days in advance — but now they’ve gotten into their own routine and she’s a very calming influence for Scott.

That quote has to come from someone in Kourtney’s camp. There’s no way a PR person working for Sofia would lead with an example as silly as toilet paper. Also, this makes Sofia sound less like a hot blonde girlfriend and more like a mom looking after her forgetful son. Which is both unsexy and completely unrealistic: Scott Disick pays someone to look after his toilet paper and toothpaste supplies so he can take his hot blonde girlfriend away on international trips whenever he feels like it. I’d sooner believe the pee tape is real than I would photos of Scott at the grocery store.

All of which is to say that I can totally see Kourtney and Sofia working together to try and get Scott on board with this. Kourtney will always prioritize her children’s happiness over looking foolish by proxy whenever their father reaches. If Sofia moves in with Scott, things become more stable in all three of their lives, and Kourtney can finally move away to Paris like she only half-kidded about. And she’ll never forget that she’s marrying Scott in a decade anyway. Whenever Kourtney proposes and Scott does split with Sofia, she’ll have all the toilet paper she can carry.

(Photo credits: Kourtney and Scott and Sofia via Joker / SplashNews.com)