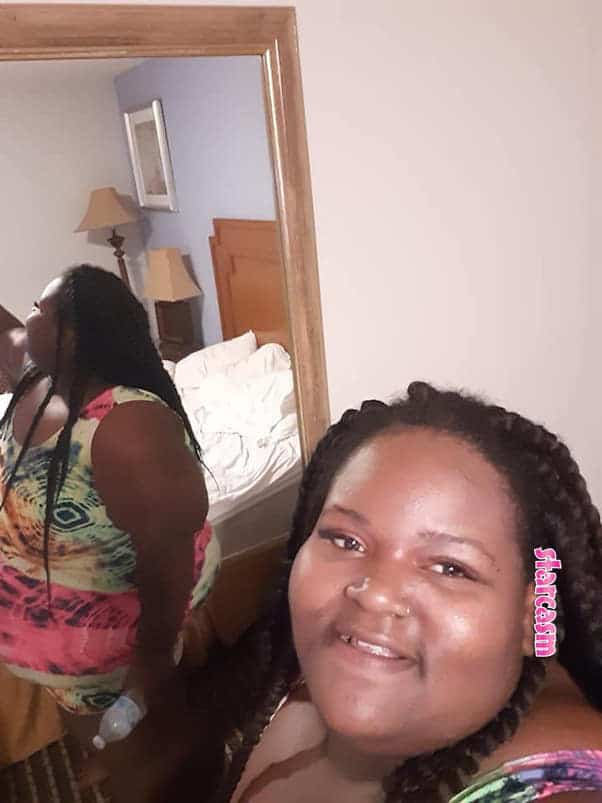 One of My 600 Lb Life‘s most controversial cast members is celebrating some surprise good news — and fighting off plenty of detractors who say that Schenee is once again lying about a major development. News of Schenee Murry pregnant has Schenee’s many doubters crying foul, particularly after the latest weight-loss-slash-baby-bump photos Schenee shared. But at least one of Schenee’s fellow My 600 Lb Life stars offered some kind words of support, and Schenee also revealed her alleged due date in defense of her claims.

The photo at the top of the article is one of the most recent Schenee has shared, and one of her only full-body shots since she made the Schenee Murry pregnant reveal earlier this year. Schenee’s fans say they can spot a baby bump in the pic (and we’ve got a few more of them below). It’s an abrupt turn, weight loss-wise, from Schenee’s last major update, when she was twerking with joy over her unspecified weight loss and asking haters “Does this look like I’m 800 pounds?”

A few months before that, Schenee raised plenty of eyebrows by claiming she’d managed to lose nearly 300 pounds since filming for her My 600 Lb Life episode began, dropping from 780 to 522. But Schenee also spent a fair part of 2019 both hospitalized for various ailments, some of them weight-related; and filming mukbangs from her hospital bed. And the rumors about Schenee abusing opiates got so bad that she spent some time filming updates — again, from her hospital bed — to refute them.

But today it seems the news is quite a bit happier for Schenee and her husband Freddy. In a June 18th update, Schenee proclaimed she’s “In love with me myself and my baby,” adding, “I’m very self-loveable get it schenee not juicy it’s Schenee Murry-Hawkins get it right boo.”

Schenee added, “P.S. I WIPE MY OWN ASS NOW #FACTS.” The all-caps are a part of the original, as you can see below: 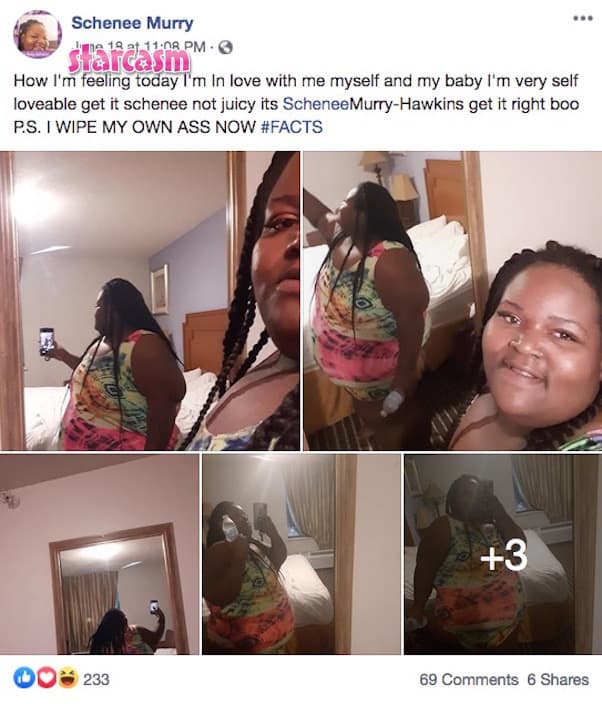 And lest you think that by “my baby” Schenee was talking about Freddy, she clarified in the comments that she did mean her unborn child, with whom Schenee says she’s five months pregnant. In one Schenee Murry pregnant exchange with a fan on Instagram, Schenee said her due date is October 12th, or just over three months from now: 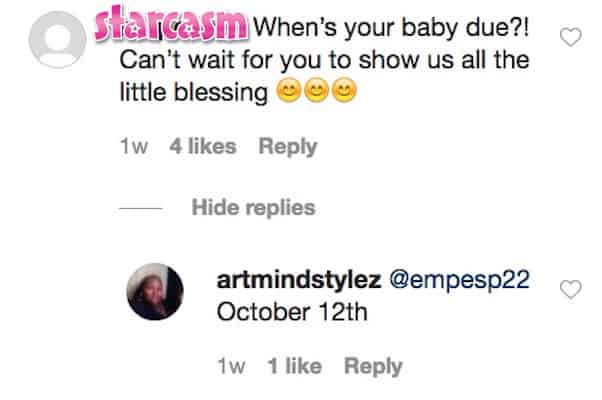 Here’s another shot of Schenee showing off her alleged baby bump, from the same June 18th update: 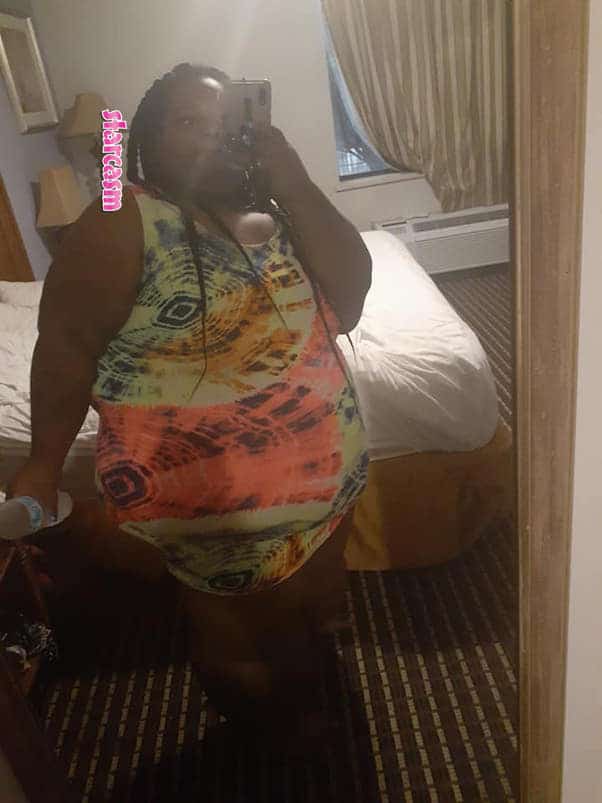 Among the well-wishes Schenee received on her photo update was a longer message from My 600 Lb Life Season 7 star Destinee Lashaee, who’s been going through her own painful battles of late. Destinee focused on the self-love aspect of Schenee’s update, writing, “Some will never know this feeling…it’s called owning your beauty[,] accepting you at any size color or anything.”

Here’s the full exchange between the two: 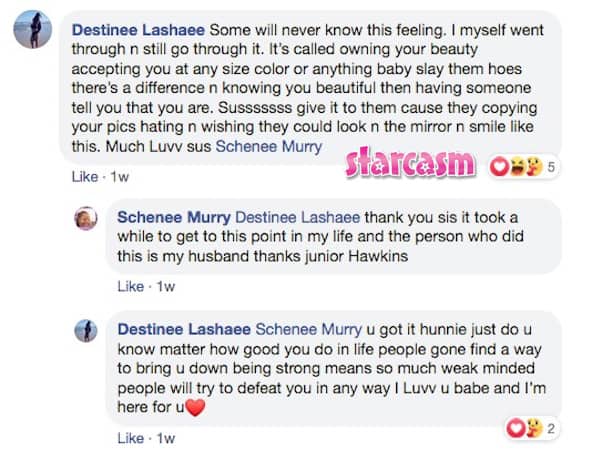 Schenee, who had already suffered two miscarriages by the time her My 600 Lb Life episode began filming in 2017, revealed in a separate exchange that she’d suffered another miscarriage last year. After the reveal, Schenee offered words of advice for a fan suffering the same thing, writing, “yeah tell [the fan’s partner] when I have a miscarriage he always there and I have to get blood and my stuff operated on so if I’m lying lord strike me down but tell bestfriend that’s cool he gone say what he wants to freedom of speech.”

Schenee has yet to film a Where Are They Now? follow-up episode; given her contentious relationship with Dr. Now, it seems unlikely that she ever will. You can stream Schenee’s My 600 Lb Life debut via the show’s official site.

PHOTOS MY 600 LB LIFE After dropping out of Dr. Now’s program, Angela Gutierrez says she’s succeeded on her own