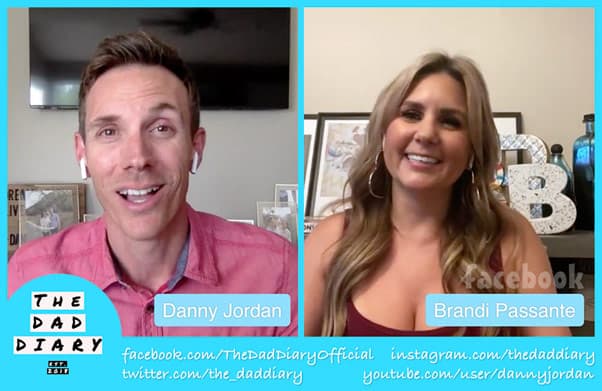 Storage Wars and Married To The Job star Brandi Passante made an appearance on The Dad Diary earlier today and revealed that she has been diagnosed with COVID-19! The reality star also talked about a wide array of parental-themed topics, including her current relationship status with long-time partner Jarrod Schulz.

The Dad Diary interview was on Facebook Live and hosted by former Storage Wars producer Danny Jordan. The hour-long video begins with Brandi revealing her illness as she says she tested positive for coronavirus and has been quarantined for 12 days. Thankfully, at the time of the interview, Brandi says that she is finally feeling much better. In addition to being without a headache, she says that she has just recently started regaining her capacity to fully taste things.

Brandi didn’t go into details about how she thinks she may have contracted the virus, but a quick check of her Instagram timeline seems to reveal that she was enjoying some time with friends roughly two weeks ago.

In the latter part of the interview, Brandi finally confirms reports that she and Jarrod Schulz have split. She says “it’s been two years” since she became a single mom. Danny asked her what being a single mom was like, especially with two teenagers. Brandi seems to throw a little shade Jarrod’s way when she says that she was already doing a lot of the parenting alone prior to the break up.

As far as the current parenting arrangement, Brandi says, “I have them all the time. 24/7 they’re here with me.”

Unlike Jarrod, Brandi doesn’t seem to be in a rush to get into another relationship. “I’m very happy with my life ride now,” she says of her family’s situation. “We’ve got a good little stride going.”

In between the COVID-19 diagnosis reveal and confirming her single status, Danny does a wonderful job getting Brandi to open up about a lot of things in her personal life — something she rarely ever does. Sticking with the parenting theme of the show, Brandi talks about what it was like for her young children when their parents became overnight international celebrities thanks to Storage Wars. She also goes into how different it was when her son Cameron and daughter Peyton were a little older and took a major role on the family’s spin-off series, Married To The Job.

Brandi’s interview was actually delayed a few weeks due to Danny’s infant daughter Emmy having to undergo surgery on her hand. That subject led Brandi to talk about some of the medical issues that her children had. She says that her daughter Peyton was born deaf and had a cleft palate — both of which required surgeries at a very young age. Cameron had a medical issue when he was a teen that required surgery and resulted in him missing three months of high school.

Speaking of Brandi’s kids, she reveals that they have asked her not to post photos and video of them on her social media and she has respected their wishes. Brandi says she often has to deal with the misconception that she isn’t around her children much because she doesn’t post about them, but that couldn’t be further from the truth.

Brandi talked about her work with WomensOwnWorth.com, including the harrowing story of the organization’s founder. In case you missed it, Brandi hosted the organization’s annual WOWapalooza fundraising event at the Arkansas Governor’s Mansion last year.

Domestic Violence, does not discriminate, Race, Gender, Economic, or Social status. No one is immune. If you think you don’t know anyone, that has suffered abuse, unfortunately, you’re probably wrong. The statistics are staggering. Many stay silent, out of fear, or embarrassment. Please, help this worthy cause and donate to @womensownworth1

On a similar, but slightly less serious note, Danny later revealed that he and I have something in common. We are both HUGE fans of Brandi on social media, especially when she shares some of the offensive messages, photos, and requests that she receives on the daily from strange men sliding into her DMs! If that sounds entertaining to you, then you should give Brandi a follow on Instagram and check her stories for some of the most cringe-worthy woo pitching tactics from guys all over the globe — including Brandi’s hilarious head-shaking reactions and commentary.

If you’re not someone looking to DM Brandi to express your admiration for her feet and/or armpits (seriously), but instead you’re looking for a rare glimpse into Brandi’s personal life straight from her, then I highly recommend that you watch her interview with The Dad Diary. I’m assuming it will be available on The Dad Diary Facebook page soon, and I will update the post with an embed when it is.

UPDATE – And here it is!