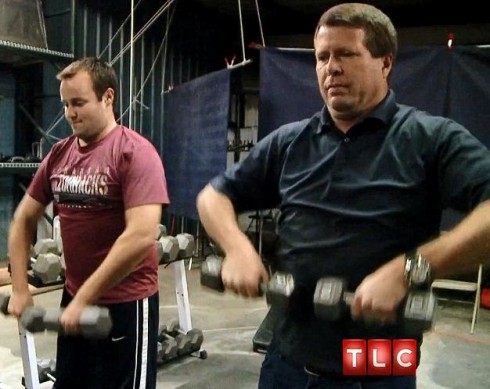 Ahh, 19 Kids and Counting. So many memorable moments! Still, there’s no question as to my favorite scene from the show: Watching Jim Bob Duggar participate in Run for a Child while wearing jeans back in 2009. Let’s just say it was a really poor clothing choice.

The episode also made it clear that the family wasn’t too big on formal exercise. As a result, the two oldest men in the family — Jim Bob and son Josh — have packed on some pounds through the years. Wanting to slim down, the men challenged each other to see who could lose more weight in a 90 day period. 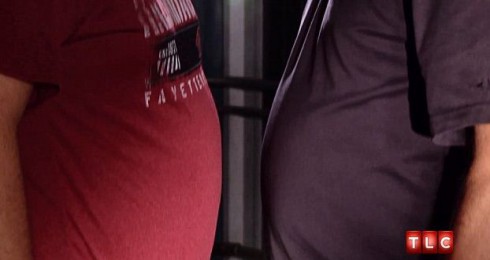 To kick off the challenge, Josh and Jim Bob enlist the help of Joseph, a younger brother preparing to leave for bootcamp. In tonight’s episode on TLC, Joseph puts on his best drill sergeant face as he instructs the pair through 60 minutes of weight and cardio exercises.

“I thought I might have overdid it a little bit with them,” Joseph admitted. “But they’ll survive.”

In addition to starting a workout routine, Josh and Jim Bob also got evaluated by the doctor. One part of the examination included monitoring the individuals while they jogged on a treadmill. Josh was up first and made it past 10 minutes before calling it quits. Up next was Jim Bob, wearing his go-to running jeans. He vowed to beat his son, which he accomplished after initially falling off the machine.

“It was very difficult, and when I got off there I felt like I was going to pass out,” he said. “But, I did beat Josh’s time!”

Both men deserve credit for focusing on their health. As fathers — Jim Bob of 19 and Josh of three — they are setting positive examples for their families. In addition to exercising, they should also refine their meals. Current Duggar diet favorites are tater tot casserole and chili Frito pie. Anyone looking to lose weight is better off with whole grains, vegetables and less processed snacks.

Unfortunately, obesity is a particularly pressing issue in the Duggars’ home state of Arkansas, which has the third highest obesity rate in the country.

Heidi Klum tweets 1992 modeling photo of herself as a brunette

Are Jessa Seewald and Jill Dillard getting a spinoff with their husbands?