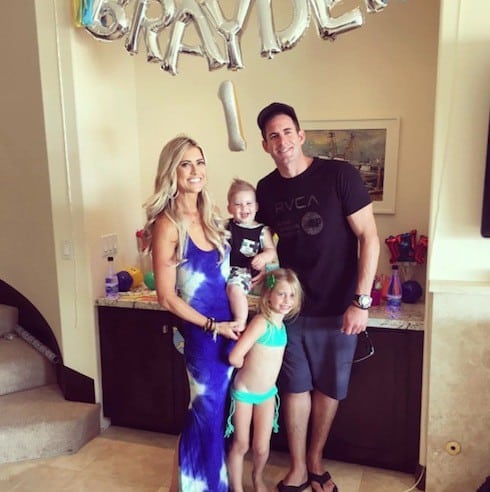 Things between Flip or Flop‘s Tarek and Christina El Moussa have improved enough for the estranged lovers to appear in public together–as business partners, at least. The couple recently shared the stage for one of their Success Path house flipping seminars, which is particularly notable given past criticism from seminar participants who allege that the whole series is misleading. Organizers often lead people into believing that both of the Flip or Flop stars will appear, when in fact neither one is scheduled to do so and the introductory seminars appear to be based around a sales pitch involving future promises of meeting Tarek and Christina.

RELATED: FLIP OR FLOP Tarek and Christina seminars under fire for alleged deception

But the two did indeed show for the Chicago-area seminar last week, and appeared to be in good spirits throughout. The couple, whose divorce proceedings are ongoing, bottomed out publicly a few weeks ago following gossip-based rape and assault allegations against Tarek. Since then, much of the speculation about their split has centered on whether Flip or Flop will indeed be canceled later in 2017–as was reported late last year–or whether, given that the show’s strong ratings, cooler heads will prevail and Tarek and Christina will remain in business together for the sake of HGTV’s cameras.

Me and #christina on the #big #stage having #fun and teaching folks how to #flip #houses!! #goodtimes #lovespeakingtogether

RELATED: How much do HGTV stars make? Tarek and Christina, Chip and Joanna, more earnings revealed

Christina followed Tarek’s social media update with her own post shortly thereafter. Christina’s shot came from the photo line after the seminar proper, during which she and Tarek posed for photos with fans:

In addition, at least one attendee shared a third photo of the couple posing for photos together:

Flip or Flop continues to air new episodes Thursday nights at 9 on HGTV.

(Photo credits: Do Tarek and Christina get paid for Flip or Flop via Instagram)