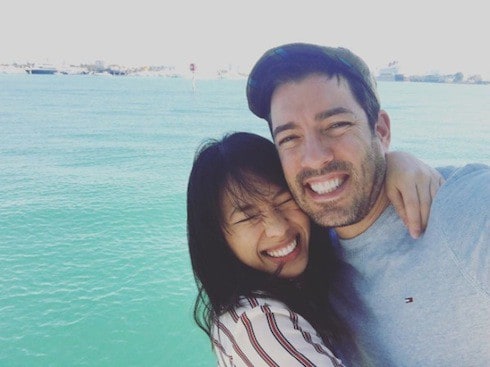 Half of HGTV’s world-famous Property Brothers is getting hitched–but who is Linda Phan, Drew Scott’s fiancée? The couple has been together for years, but relatively little is known about the woman who fans the flames of Drew’s heart. Indeed, though she’s appeared on Property Brothers before, fans of the show are often surprised to learn (or be reminded) that Linda has worked for Drew, Jonathan, and J.D. Scott for several years.

In 2014, Linda was hired as the Creative Director for Scott Brothers Entertainment. Her background in both public relations and architecture made her a natural fit for the position, which requires Linda to “[develop] concepts that contribute to the company’s growth across various platforms,” and sees her “manage[ing] multiple projects, from digital content, product and merchandise lines, to marketing campaigns and philanthropic efforts.”

In fact, it seems that Linda and Drew were drawn together because of their compatible work ethics. “My girlfriend and I are both workaholics,” Drew said, shortly after Linda came on board with the Scott Brothers. “We love what we do and that we can work side by side.” He added that they managed to combine work and play in delightful ways: “The small gestures are romantic to me–it makes me smile every time I find funny notes in my bag when I go away on business trips.”

The story of Linda and Drew’s actual engagement befits such a talented couple. According to Drew himself, the night was planned down to the last detail, beginning when he bought a ring weeks in advance of the actual proposal and kept it on his person at all times so neither Linda nor anyone else would stumble across it and ruin the coming surprise. (In addition, Drew apparently did all his planning without the use of e-mail, since there was a chance that Linda, in her role as the Brothers’ Creative Director, would find a message while looking for something else. Future elaborate proposal planners, take note.)

Then, Drew snuck in a quick trip to New York City to record a cover of Train’s 2010 hit “Marry Me,” and had his version sent to Toronto restaurant Piano Piano ahead of he and Linda’s upcoming dinner date. Before popping the actual question, he cued the staff to play the song, and proposed after more staff wheeled out a cake decorated like the cover of Oh, The Places You’ll Go, one of Linda’s favorite books–except that the title had been edited to read “Oh, The Places We’ll Go.”

After all that, the only thing left to do was whisk Linda away to what she thought was a Property Brothers Christmas party–except that Drew had clued the company’s employees in to what was going down, and so the party was an engagement celebration instead.

In addition to all that, the magic of social media has clued us into a bit more about Linda’s life. In the early stages of their relationship, she and Drew were much quieter on Instagram and Twitter. It’s taken some months, but the two of them now share regular updates–whether together or apart–and their fans have rejoiced in turn. We’ve gotten to see Linda at the DC Women’s March…

These amazing, young women showing how we all kept each other warm today – #Embrace , #Grace … and a little bit of #InYoFace ? ? #WomensMarch #WomensMarchOnWashington #Gaia #GotYourBack

…her excellent sense of humor…

Christmas crafting with Rayne! I made him a hat and he made me… something that I left for his mum to unwrap ?

?????????? So glad I bumped into this famed street performer tonight. #dancingwiththestars

…and–unspurprisingly–that she’s a very good amateur photographer in her own right:

Quickie but always a goodie ❤️

Since Valentine’s Day is coming up, we’ll leave you with this throwback shot of Linda and Drew from last year’s celebration. Clearly, the two of them were made for each other 😉

Congrats again to the happy couple!