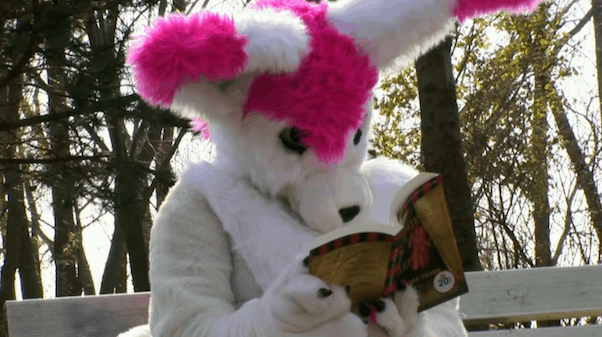 The My Strange Addiction furry episode was one of the show’s first, and helped set the tone for increasingly outlandish later seasons. In honor of TLC digging out one of shock-reality’s most successful series for a throwback marathon tonight, we’ve been offering updates on some of its most infamous cast members. We’ve already written about the good news in the life of Karmello, the woman addicted to butt injections. We’ve also got an unfortunate update on the now-tragic story of Kristie, the woman who couldn’t stop eating dirt.

But Lauren Atkins, the woman behind the My Strange Addiction furry episode, has dished on the series’ production in the years since filming wrapped. Lauren revealed exactly how legit her episode was — and explained some of her deep-seeded grievances with the way producers and editors turned her story into something else.

Then-19-year-old Lauren relished the time she spent in her elaborate, homemade fursuits, which she wore, according to the voiceover narrator, “every day.” Lauren’s mother said that her daughter had been interested in sewing her own furry costumes for years. And Lauren explained that the suits allowed her to become someone she simply couldn’t be otherwise.

Right around the time that My Strange Addiction was wrapping series production, though, Lauren offered herself up on the reddit AMA altar. And over the course of her chat, it became very clear that Lauren’s episode was not at all what she’d envisioned or hoped for.

For starters, Lauren revealed that she was “quite ashamed of” her episode after it aired, and “did not speak about it.” When asked why she’d agreed to be on My Strange Addiction if the end result was shame, Lauren clarified that she hadn’t thought it a bad idea — initially:

At first, I thought it sounded like a great idea. When the producer contacted me, they made it a point that this was a show about people’s strange hobbies, and wanted to showcase the making of a fursuit. Furries have always had a bad rap with the media, so I thought that this could be a way to shed a different light on it. Of course once I was knee-deep, it all evolved into something different, and I was ashamed with the way they portrayed me.

And when asked for more detail, Lauren was happy to oblige. From her point of view, the My Strange Addiction furry episode was edited to tell the same old story about members of Lauren’s community — namely, that they’re all using costumes to evade some larger reality.

It was definitely twisted. They portrayed me as a jobless, education-less shut-in who uses a mask to hide behind the fact that I cannot accept the death of my father as a reality. I was attending school during the time of filming, and while I am a bit of an introvert at times, I am in no way close to what they had shown. My father passing away does still put a heavy weight on my heart, but it does not inhibit my life in any way. I have never spent “countless hours” holed up in my room building costumes, nor do I “wear the costume to family events and cannot see myself in public without it.” That was honestly the most shocking part to me, how they made it seem that I never took the costume off. Before the airing of the show, I had worn the costume twice, and both times were for fitting purposes. [Ever] since, and up until this day, I reserve one weekend a year to wearing a fursuit; during an annual convention. I have a completely normal life outside of this; I have a job, a loving family, a boyfriend, a group of great friends and I am a musician and firearm freak more than I am a furry. It is merely a small hobby of mine, but they took what information I gave and ran with it.

Elsewhere, Lauren was asked if she considered her fursuits “an addiction or a hobby.” Lauren’s response to that question was perhaps the most telling of all.

“It is a simple hobby, and not even my biggest hobby, either,” she said. “I have responded more in-depth about this already, but the name of the show and the way they have edited it made it seem as if it were an actual addiction or problem, which it is not.”

It seems like that’s also been the biggest criticism of the furry episode, from people both in and outside of the community: that wearing fursuits isn’t an addiction. And it appears even less so when compared with eating dirt or deodorant, drinking blood, or having dozens of breast enhancement surgeries. It should be interesting to see how well the episode holds up — or doesn’t — now that TLC is airing it again.

You can revisit the My Strange Addiction furry episode via streaming here. The episode also airs as part of the aforementioned marathon at 11:30 tonight on TLC.

Tami Roman announces she’s done with Basketball Wives: ‘Bittersweet, so appreciative and thankful’ for the show