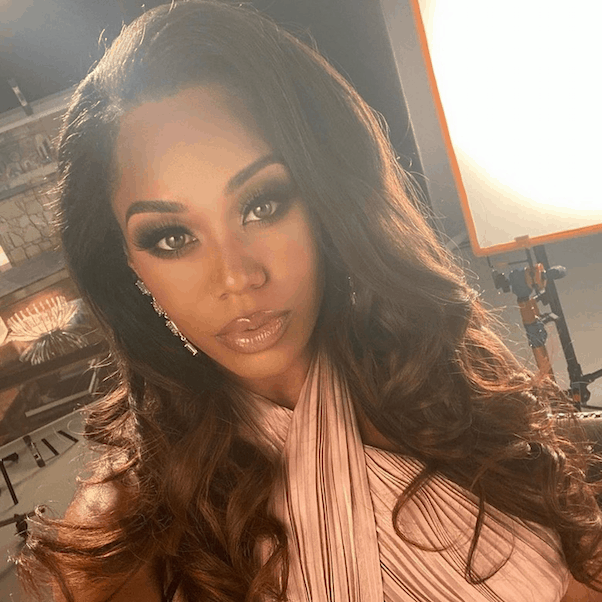 The fallout from Real Housewives of Potomac‘s Monique Samuels fight continues — and likely will for some time — but its instigator says she accepts blame for her role in it. In a pair of updates, Monique has been candid about the beating she gave Candiace, explaining that there was a lot more going on in her own head than viewers could possibly have known.

The first few interviews Monique gave after the fight episode aired definitely sent a different message. She sounded a lot more divisive when saying she believed the other RHOP cast members had been “very strategic” in their meeting after the Monique Samuels fight (which actually took place almost a full year ago, in late October of 2019). Monique suggested, without proof, the rest of the cast was trying to get her fired from the show.

Since then, Monique has come across as much more contrite. And she’s started to explain some of what was going on in her head in the moments leading up to the fight, even going so far as to say that she’s having a hard time remembering exactly what she was thinking. Which might sound like a cop-out. But if you’ve ever been in a blind rage, you know it’s a legit answer: you’re not always “thinking” at all, in those moments.

The most recent answer Monique has given came in the Instagram post paired with her photo at the top of the article. Monique says she didn’t watch the fight episode as it aired, but sat down with it a few days later when she was better able to process her thoughts:

I finally watched Sunday’s episode (if you watched the last 5 minutes you see me having a deep talk with my husband, my pastor and my First Lady). What most people don’t realize is I’m “dealing” with coming to terms with my part in the matter. At times struggling to put into words how I felt in the moment and the order of events that transpired. Without the ability to press rewind or see the footage. Purely going off of my own recollection, which at times was crystal clear and then the next day was a blur. Coupled with people telling me what I recalled did or did not happen. In life many people only see “the issue” and then see it resolved without witnessing the PROCESS. So this process looks FOREIGN to some of you. I will not put a bandaid on this and walk away. This is what growth looks like. A whole entire journey that I never shied away from and almost left the show so I would have time to really work on myself and realize my triggers. Until next week… ❤️

Saying she won’t “put a bandaid on this” is helpful — it suggests she’s talking about both her relationship with Candiace (whatever can be salvaged) and her own behavior.

If you’re thinking that Monique was a little short on specifics regarding her own “process,” and what her “growth” might look like in practice, there’s also the interview she gave to People earlier this week. In that interview, Monique went into much more detail on her own experience with bullying and being on the other side of beatings both physical and emotional.

Monique even appears to suggest the fight began partly because she misunderstood Candiace’s movements and thought she was about to get hit:

“It wasn’t just about [Candiace] that night,” Samuels explains. “Once it became physical, my response was that of defending myself, but also that pounding was for every person that has ever done anything to me.”

“For that, I just felt like, ‘Wow, [Candiace] didn’t deserve all of that,’ ” says Samuels, who adds: “I do not excuse my actions. I take full ownership of my part in the altercation.”

While she admits to being at fault, Samuels does feel that she was “egged” on. “I was not trying to engage her. I was already at the point where I realized she’s not the person who I thought she was,” Samuels says, recalling the incident, which took place at a winery where Gizelle Bryant’s recent literary award was meant to be celebrated.

Samuels says she remembers saying, “I’m through with her,” and believes that may have been what set Dillard, 33, off. “She starts coming closer and then that hand comes right next to my chin and instantly, now that I look back, that was definitely a trigger. I don’t like hands in my face. I said, ‘Get your hand out of my face’ and ‘You need to back up,’ but she did not.”

For some Real Housewives of Potomac viewers, the fight was just too much to overcome, and Monique is dead to them. In that case, there’s no amount of explaining that can justify what happened. And Monique does still have a lot to do to make things right with Candiace at the very least. But opening up like this could be the first step in that process for the cast as well as for viewers.

AUDIO Summer Bunni goes after Lyrica before shading the entire LHHH cast: ‘Everybody is a motherf*ckin joke in costume’

Kylie Jenner is begging for a showdown with Blac Chyna