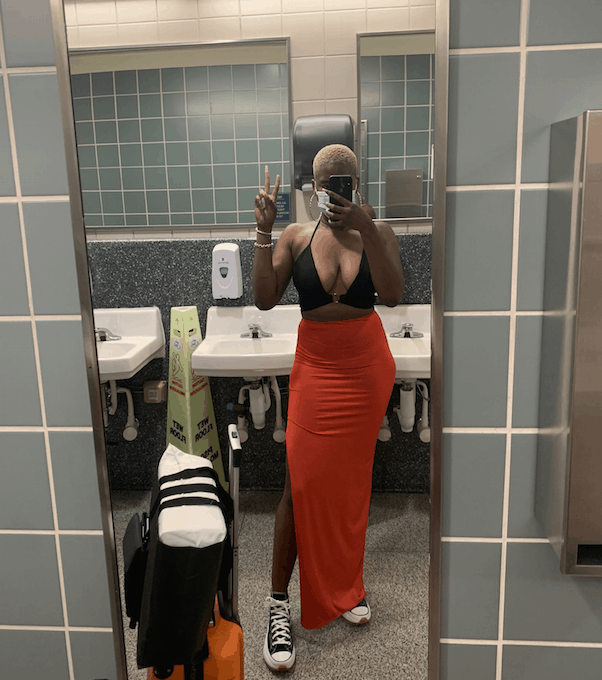 On October 6th, Eubanks intended to fly back to Chicago from New York’s LaGuardia Airport. She was refused entrance onto the plane, however, when the employees working the gate told Eubanks her shirt was in violation of the airline’s dress code. “Y’all I was KICKED OFF my @SouthwestAir flight because my boobs are ‘lewd, obscene and offensive,’ Eubanks wrote on Twitter. “I was told that passengers may look at me in my attire and be offended.” She then attached the photo at the top of the article.

Predictably, a long discussion ensued. According to Eubanks, it took at least a half-hour for the employees to produce a handbook stating which rule she had violated by wearing a low-cut halter top. During that time, one of the employees working the gate actually corralled the flight’s captain as he was coming out of the bathroom and asked him to intervene.

The @SouthwestAir employee stopped looking for this policy and caught the Captain coming out of the bathroom and asked him to intervene. He literally comes out saying that they’re hating on me 🙃. pic.twitter.com/oJ4yqe9hLq

Straightaway, the captain told Eubanks “They’re hating on you ’cause you look good.” But the woman booted from flight wasn’t about to be charmed, telling him she wanted to see the actual rule and ultimately asking “What it [the rule] say? I have to leave my titties at home?”

In the end, the captain had to lend Eubanks one of his own shirts in order to get the gate workers to let her on the plane. But, as Eubanks pointed out in a follow-up tweet, wearing the shirt to get onboard didn’t mean she had to *keep* wearing the shirt once seated.

“I eventually took it off,” she wrote. Eubanks later told the Chicago Tribune, “They never said I had to keep the shirt on. It was just to get on the plane.”

Unfortunately, that got one of the flight attendants agitated, and Eubanks was informed she’d have to talk with another Southwest manager upon arrival in Chicago. “You don’t have very many clothes on top,” a Southwest employee told Eubanks after she was confronted in Chicago. “It reveals quite a bit.”

Eubanks told the Tribune the whole ordeal was “upsetting and annoying,” and “didn’t make sense to” her even days later. “There needs to be a clear policy that’s not based on personal biases,” she added. “The proper thing to do is not let it [the dress code] be at the discretion of whoever is working that day.”

After she tagged Southwest on her posts, Eubanks said the airline reached out to apologize, as well as offer to refund her fare in full.