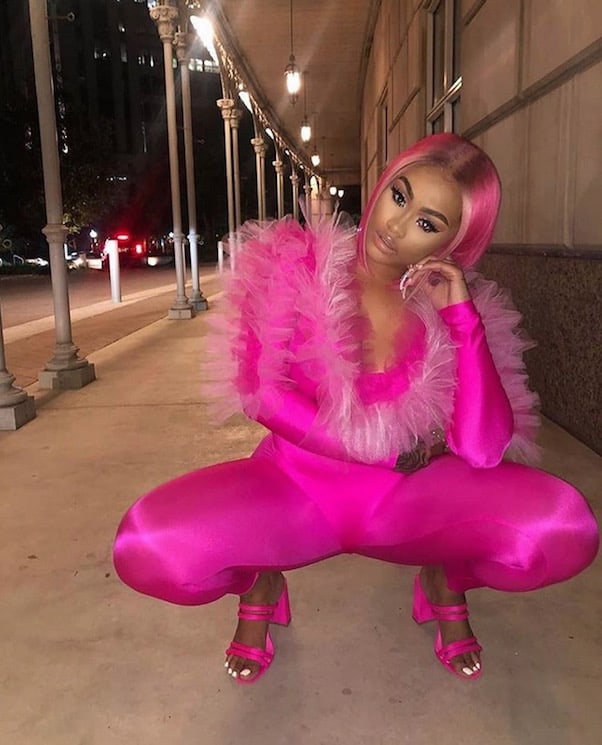 Ever since she joined the Love & Hip Hop Hollywood Season 6 cast, newbie Summer Bunni has been happy throwing her elbows around like a power forward with an eye socket phobia. The latest LHHH Summer Bunni news sees Offset’s alleged mistress gleefully casting a redwood’s shade over the entire rest of the cast, saying every single one of them is “a motherf*ckin’ joke” and adding that the show may as well be called Love & Hip Hop: Halloween Edition for all the costumes everyone’s wearing. Oh — and Summer also dragged Lyrica again, this time with brand-new insults!

The latest salvo in what’s become the battle of LHHH Summer Bunni versus the world came during Summer’s recent interview with The Domenick Nati Show. Summer actually recorded the interview before last week’s episode, but it would appear that the official confirmation of A1’s affair with Summer and Lyrica’s split from him overshadowed Summer’s explosive comments.

Here’s Summer’s full interview, followed by a synopsis and transcript of the most shade-tastic moments:

To no one’s surprise, the first question Summer gets is about the A1 and Lyrica mess. Summer quickly triples down on the names she’s called Lyrica in the past few weeks, to say nothing of the tea she’s spilled about the couple. (And honestly, it’s more like Summer is quadrupling down at this point — she’s had so much to say about Lyrica in particular that I’ve lost track of it all.)

How is your current relationship with Lyrica?
She’s very scary, she’s very wack, she’s lame…If I was here, I probably would feel salty like, her too. If I saw this young, beautiful, talented girl that scooped up your husband when — he never said *you* were married. That situation right there? I didn’t force him to be with me. Lyrica…she’s old, you know, she looks like someone’s grandmother…[Laughs]. It’s just really sad. Jigsaw face, big teeth. It’s like — girl! Grandma. I’m over her. It’s enough.

Except it apparently wasn’t enough, as Summer couldn’t resist getting in one more dig and verged on “protest too much” territory in the process: “Well, actually, who is that?” she said. “Who were we talking about?”

Finally, in response to a skillfully loaded question about which member of the cast “changes the most” on-camera, Summer unloaded. In her view, the answer is still “all of them,” because they all acted like they didn’t know who she was when she joined the show.

Which LHHH star changes the most when the cameras start rolling?
All of them! What the f*ck? All of them. The whole cast. I’m telling you. Jigsaw, It clown, Justin Bieber — that’s A1 [Laughs] — Princess Platypus, Ray J who had his whole girl took by Kanye. [Breathless laughter] Everybody just acts so different! See, I’m the same on and off camera. Like, I’m the same. That’s why I was looking at them like, ‘Oh my God, are they serious?’ And they all have DMed me before, they all have looked at my stories, and everybody act like they don’t know me, and never seen me — I’m like ‘Oh wow, that’s crazy.’ It’s just a mask they wear, you know? The show could be called Love & Hip Hop: Halloween Edition, because everybody’s a motherf*ckin’ joke. In costume.

If you haven’t yet, do yourself a favor and listen to the whole thing: the woman talks so much sh!t it’s almost hard to believe that this particular LHHH Summer Bunni interview is only five-and-a-half-minutes long.

Because of the MTV VMAs, Love & Hip Hop Hollywood Season 6 airs a new episode an hour earlier tonight, at 7 instead of the usual 8. The show returns to its normal time slot next Monday, September 2nd.