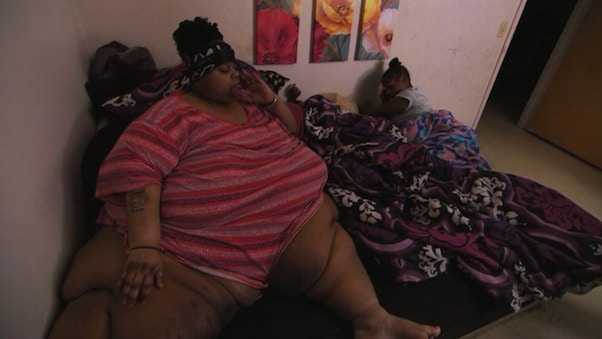 In an unusual move, TLC is keeping details of the My 600 Lb Life Mercedes Cephas episode under wraps ahead of its premiere. The network has withheld a preview clip, but we’ve managed to find out a bit about the Ohio native and mother of two who depends on her young children for care.

For starters, here’s the episode synopsis from the network:

With severe lymphedema, Mercedes can barely stand and only cares for her two small children with the help of her extended family. Dr. Now can give her the tools to lose weight, but to succeed she must face the trauma inflicted by her late abusive father.

Unfortunately, lymphedema is nothing new to My 600 Lb Life cast members or viewers — though it’s nothing to scoff at, either. This season we’ve already seen Brandon Scott, among other participants, struggle with mobility due in part to lymphedema; Season 3’s Susan Farmer also infamously suffered from the condition. And Chuck Turner from My 600 Lb Life Season 2 had a 40-pound lymphedema mass removed from his left leg.

Depending upon children for care is another trope we’ve seen several times on the show. Perhaps most notably, Ashley Dunn-Bratcher from My 600 Lb Life Season 4 used her son Patrick’s dependency upon her as motivation to lose weight and give him his childhood back. Mercedes may well use Marlon and Mer, her two children, for similar motivation.

Mercedes’ story will be available for streaming on My 600 Lb Life‘s official site after it airs.

UPDATE – As we published this article, TLC did release a preview clip from the My 600 Lb Life Mercedes Cephas episode. The clip is much shorter than the previews we normally get, and, as of this writing, is available only on the network’s Facebook page. You can view it here.