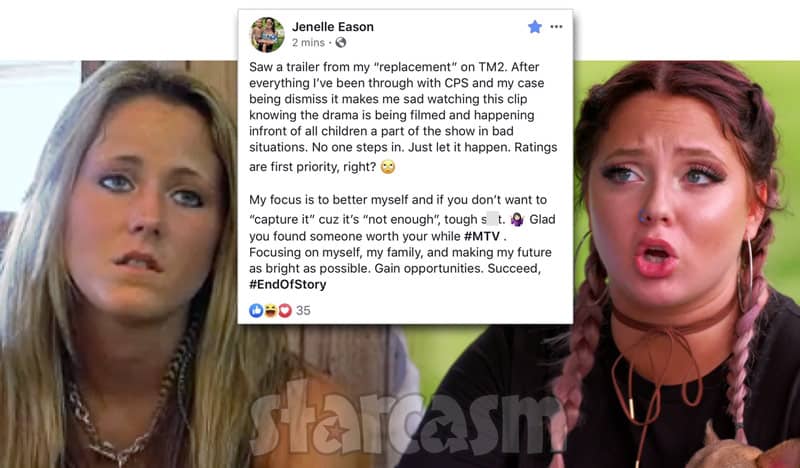 Teen Mom 2 returns tomorrow night without their controversial headline factory Jenelle Eason, but MTV seems to have found a suitable drama mama replacement with former Teen Mom: Young and Pregnant star Jade Cline! In a dramatic preview clip that is eerily reminiscent of numerous “outside voice” Jenelle scenes from over the years, Jade gets into a heated screaming match with her on-again, off-again boyfriend Sean. Jenelle didn’t take too kindly to the similarities, however, and she used the clip as a reason to mount up her high horse and trash MTV and Jade for making ratings a “first priority.”

“Saw a trailer from my ‘replacement’ on TM2,” Jenelle began her since deleted Facebook post. “After everything I’ve been through with CPS and my case being dismiss it makes me sad watching this clip knowing the drama is being filmed and happening infront of all children a part of the show in bad situations. No one steps in. Just let it happen. Ratings are first priority, right? ?”

Jenelle continues her tirade by chastising MTV for not wanting to film her bettering herself. “My focus is to better myself and if you don’t want to ‘capture it’ cuz it’s ‘not enough’, tough sh*t. ??‍♀️”

Jenelle concludes with a bit of sarcasm, then some positivity about where her life is headed post-Teen Mom 2. “Glad you found someone worth your while #MTV. Focusing on myself, my family, and making my future as bright as possible. Gain opportunities. Succeed, #EndOfStory.”

Here’s the preview clip featuring Jade and Sean arguing, which I assume is the one Jenelle is referencing:

Jade and Sean get into a heated argument when he accuses her of going through his phone on next Tuesday's premiere of #TeenMom2. ? pic.twitter.com/ay5CLAqcPP

Speaking of Jenelle’s success, she FINALLY launched her JE Cosmetics eyebrow kit! The $40 kit is currently available on her new website after her previous url got bought out from under her and is now an animal rights awareness site in honor of Jenelle’s deceased French bulldog Nugget.

Here’s a photo of the eyebrow kit and the contents, which were made in China according to her website:

[It comes with a pair of scissors, but I do not believe that they were hand forged by Jenelle’s blacksmithing hubby.]

The kit launch comes after months of incredibly confusing marketing. From what I can piece together, the product launch was supposed to be on September 19, but many people got confused when a JE Cosmetics launch party was announced for September 9.

The NYC salon hosting the launch party later posted that they had canceled the event after being made aware of Jenelle and her husband David Eason’s rather extensive history of controversial actions and comments. “Our salon was unaware of what her and her husband have done or have been connected to, and in no way, would we support such brutality,” Flirt Beauty Boutique stated. “We apologize for not doing our research before hand.”

Jenelle claimed that the launch party was not cancelled, but merely had to change locations. She says the change of venue was due to the location being “leaked,” despite the fact that the event time and location was posted on her manager Johnny Donovan’s Instagram account. (Jenelle says that the post was erroneously made by an intern.)

It was announced late last month that the JE Cosmetics “online store” was going to launch on September 1, which only further confused people when the date came and went without the product being available.

At the time of this post, neither Jenelle nor the JE Cosmetics social media accounts have made any sort of announcement about the eyebrow kit being available for purchase.

UPDATE – We may have a bit of info on the location of the JE Cosmetics launch event today. Custom Candle Company shared a post on Instagram featuring the eyebrow kit as well as some JE Cosmetics custom candles that I assume were promotional items given out to attendees:

The post’s location tag is the Mr. C Hotel in Seaport.

UPDATE – And we now have video from the actual launch event, including the Teen Momtrepreneur behind it all, Jenelle! 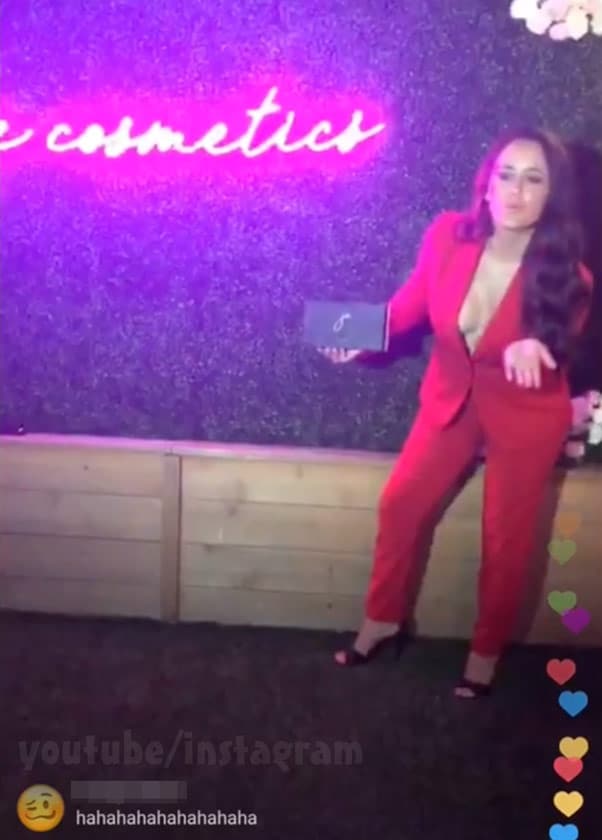 UPDATE – Jenelle got some support for her product launch by another fired former Teen Mom star! Farrah Abraham and her daughter Sophia took time to pose in front of the JE Cosmetics neon grass wall: 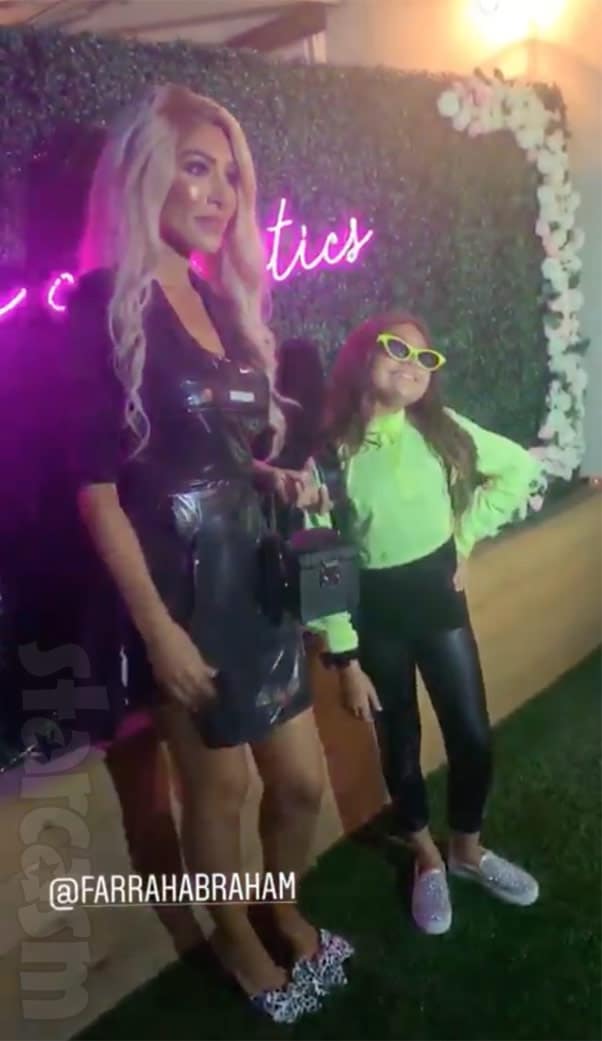 Farrah and Jenelle have quite the history, and not all of it is super chummy. Jenelle has called Farrah many unflattering things over the years, such as “a straight dumbass.”

Farrah has had even more negative things to say about Jenelle, including a VERY lengthy statement waaaay back in 2013. Here’s an excerpt:

I personally have never had interest in her life as she seems to continuously not care about her son or herself. The drugs and bad relationships with men are not good.

From one helpful and concerned Teen Mom to another Teen Mom, who is clearly struggling, I think it is in your best interest to detract from spouting jealous attacks towards myself and other successful, positive and great mothers and to focus on making her marriage better, sorting out her drug addiction and helping her wonderful son that needs her in his life.

Jenelle has all the potential to turn her negatives in to a positive like I have.

Jenelle Evans wanted by police for allegedly attacking Nathan Griffith, she vows to clear her name