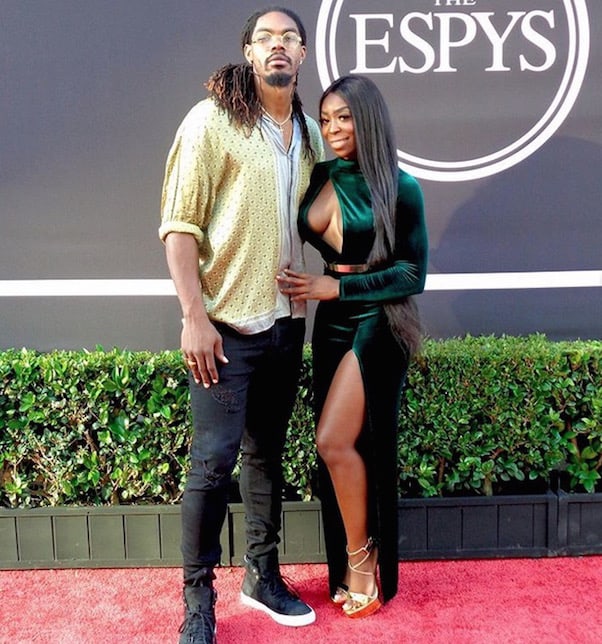 Basketball Wives star OG reportedly had a big announcement she wanted to make at the reunion taping, but her plan was foiled when producers kept her off the stage. Now, word of the news appears to have leaked out: Is Ogom Chijindu pregnant with her first child?

We should stress that, at this point, any talk of OG’s pregnancy is still gossip. But numerous sites — among them MTO — are now reporting that OG and her longtime partner Kwame Alexander are ecstatic after finding out they’re going to be parents.

Per those reports, OG has apparently decided to retire from lingerie football. And, after a tumultuous Basketball Wives Season 8, she was said to be eager to break the news on the reunion stage during filming this past weekend. However, it appears Ogom wasn’t even allowed to film with the other cast members: during the 15-hour taping, producers shunted her into a room backstage and had OG phone in to the main soundstage to participate.

Naturally, this did not sit well with OG, whose cryptic tweet following the taping now makes more sense:

THE WAY PEOPLE PLOT AGAiNST ME iS WiLD..

THE GAG iS YOU CANNOT STOP MEEEEEEEEEEEEE..???‍♀️?

But is Ogom Chijindu pregnant for real? For one thing, she has yet to make an official announcement about any alleged retirement from lingerie football. However, the teaser for this week’s episode of Basketball Wives features OG talking with some of her coaches about getting into the coaching game. She never drops the R-word during the clip, but the implication is there (provided you’re willing to read into it).

Additionally, eagle-eyed or delusional fans are pointing to OG’s confessional look from last week’s episode. The claim is that she’s sporting a baby bump — and confessional scenes were shot much more recently than the main scenes. In this case, it’s OG commenting on Jackie Christie’s invitation to have the wives on her podcast. Take a look and see what you will:

Did Young Bae have her baby yet? Third trimester update from Black Ink Crew star