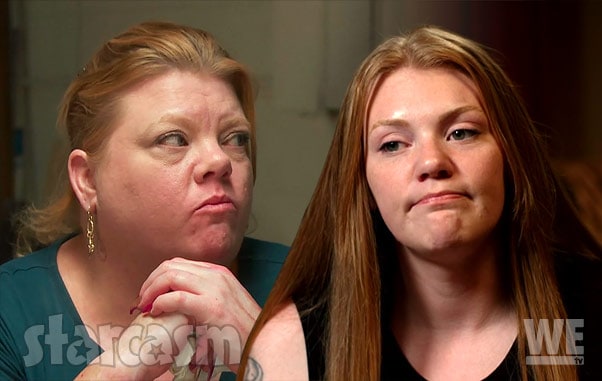 On the current season of Love After Lockup: Life After Lockup, Brittany Santiago is trying to mend her relationship with her mother Cynthia by inviting her back into her and her family’s life. On the show, Brittany reveals that her mother and father are alcoholics and drug addicts, and she talks about the unhealthy home life that motivated her to run away from home at the age of 12.

Brittany spent a lot of her youth living on the streets and crashing on couches, but it appears that she was once again living with her mother when she was 18 and was arrested for allegedly attacking Cynthia after a heated argument.

According to police and court records, Brittany was charged with battery / domestic violence stemming from an incident that occurred on November 18, 2008. The incident report indicates that Brittany and Cynthia “got into an argument at approximately 11:45 hours regarding Cynthia telling her daughter Brittany to get a job.”

From the incident report:

Brittany became very aggressive with Cynthia and grabbed the house phone in the apartment [address redacted] and hit Cynthia in her right knee causing an abrasion. Cynthia then tried to grab the phone from Brittany’s hand to call security.

Brittany reportedly “struck Cynthia multiple times in the back with closed fists” before Cynthia ran out of the apartment and went next door to notify security. When security arrived, Brittany had already fled the scene on foot.

Police later arrived to get Cynthia’s statement and to take photos of her injuries, which were described as a scratched leg and shoulder. Cynthia also stated that she felt pain on the back of her head. Despite the injuries, Cynthia refused medical treatment.

The addresses for Cynthia and Brittany were the same on the incident report, so I assume that Brittany was at least crashing with her mother at the time.

The case bumped around in court for years, and was eventually dismissed in February of 2012.

If you are curious about how the assault fits into Brittany’s timeline, I can try to break that down a little for you.

Brittany ran away from home at 12 years of age. She first got pregnant when she was 15, and got pregnant again when she was 17. CPS got involved and removed both children from Brittany’s care. I assume this was prior to the altercation with Cynthia because there was no mention of children in the report.

#LoveAfterLockup's Brittany spent 7 of her 10 years as an adult behind bars, but her difficult life started well before that – including alcoholic parents, running away at the age of 12, and being pregnant at the age of 15 then again 2 years later https://t.co/KD24OahkKV

In November of 2008, Brittany and Cynthia get into the altercation described in this post.

Within just a few months, in February of 2009, Brittany got caught up in some shady dealings and would end up being arrested and charged with felony counts of burglary and possession of a stolen vehicle, as well as a misdemeanor count of conspiracy to possess a stolen vehicle.

Brittany was indicted on the charges in May and would eventually plead guilty to both felony counts. She was sentenced to 5 years for each conviction in January of 2012, with those sentences running concurrent. Thanks to time served, Brittany was released in October of 2013.

One month after her release, Brittany completed a post-incarceration job placement and leadership program. She was also preparing for her first college classes, to begin in January of 2014. “I’ve been home exactly one month now and everything is going great!” Brittany wrote that November. “I feel like I’ve already accomplished so much and this is really just the beginning. I see the world with new eyes, it’s almost hard to explain. I appreciate what others bypass. I thank god for my second chance and will live everyday to the fullest. Anything less than that I’m cheating myself!”

#LoveAfterLockup Details on Brittany's 2016 arrest, for which she was initially facing 10 FELONY CHARGES, including kidnapping and murder! ? https://t.co/tCkHXxKxAA

Brittany was able to get a plea deal that reduced all of the charges down to a single felony count of conspiracy to commit robbery. She was sentenced to 2-5 years in September of 2017, and was released in early 2018 after being credited with 531 days for time served.

Her prison release in early 2018 was captured by WE tv for Love After Lockup Season 2. Viewers have been able to keep up with her story from there.

To continue following along with Brittany’s journey, including her attempt to reconcile with her mother Cynthia, be sure to tune in for new episodes of Love After Lockup: Life After Lockup airing Friday nights at 9/8c on WE tv.

LOVE AFTER LOCKUP Tracie Wagaman’s cause of death revealed