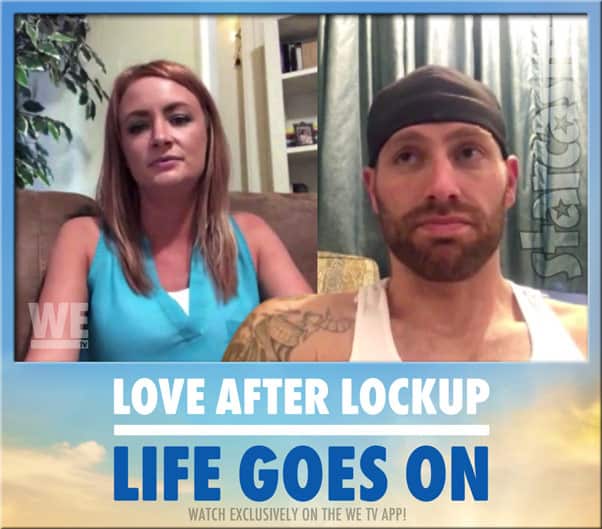 Former Love After Lockup star Caitlin recently appeared on her own episode of WE tv’s app-only series Love After Lockup: Life Goes On in which she answered questions about her ill-fated relationship with convicted felon Matt Frasier. On this week’s episode of Life Goes On, Caitlin returns along with Matt to talk a little more about their relationship, as well as Matt’s recent arrests.

“Obviously Matt and I are no longer together,” Caitlin assures everyone right up front. “He took off and has been with someone else — living with them and everything,” she adds.

“It’s still really, really hard for me, you know? He is a different person than the person I met originally. Whoever he is right now is not who I know.” Caitlin then seems to reveal that she recorded the episode back in May, right after Matt was arrested for meth possession. “I was informed just a couple of days ago that he was picked up again for possession,” Caitlin says of her troubled ex.

Caitlin gets a little emotional as she delivers some very harsh words about Matt as kindly as possible:

I don’t even know if it’s, like, a mean thing to say, or — I mean, he could be mad at me for the rest of his life for saying it, but honestly, I’m glad that he got picked up. He’s better off in jail…He’s one more car accident away from not only taking his life, but somebody else’s. You can’t just run around doing the things that he is doing with no repercussions. And he obviously can’t figure out how to hack real life without meth…I’ve got mad love for the guy, but he’s sick. It hurts my heart to see him, you know? It hurts my heart to see his condition.

The episode then shifts to Matt, who is sporting a white tank top and reversed ball cap as he talks about his latest arrest. “With the new charges added on, my range is 87-116 months. Yeah, I’m looking at ten years right now.”

The prison vet is quick to not point the finger at anyone but himself, though. “Nobody’s a bad influence on me but myself, man. [No one] has ever influenced me to do anything,” he says. “I just, you know, if I don’t want to do something, I’m not gonna do it. If I wanna do it, I’m gonna do it.”

Matt then tries to explain his motivation for what he does and doesn’t do. “The reason I go out running wild and sh*t doing all this crazy sh*t is because I just wasn’t satisfied with nothing and content with just chilling. But ever since I’ve been with [Bri?] I’ve just been content to just hang out and do nothing really.”

Caitlin is asked whether or not she regrets breaking up with Matt. “There’s been an immense weight taken off my shoulders since we broke up,” she reveals, before adding that she no longer has to try to talk him out of doing stupid things like stealing (or “borrowing”) cars. “Once he really, really started getting high, it was like chasing a wild toddler around without a diaper that wouldn’t stop sh*tting all over the place,” she explains. 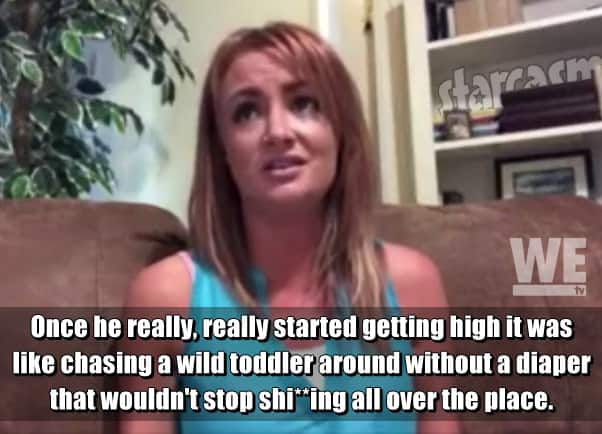 Matt doesn’t seem to have any regrets about the relationship being over either. “She acts like a five year old most of the time,” he says of Caitlin. “My family members encouraged me to leave her. Check it out, I’m way over it! It doesn’t matter how clean I was…I would not want to get with her…I hope she finds someone who does her thing, and whatever it is she does, I don’t know, I don’t care. I’m not trying to be mean, but I’ve moved on.”

To see Matt and Caitlin’s full Life Goes On episode, just download the WE tv app and get to watching! It’s free, and there are also other episodes featruing Johnna and Garrett as well as Mary and Dom!

As far as Matt’s legal issues, it appears as though his felony possession of a stolen vehicle and meth possession cases have been combined with a trial scheduled for next month.

LOVE AFTER LOCKUP Tyrice and Chanda spoilers: Are they still together?