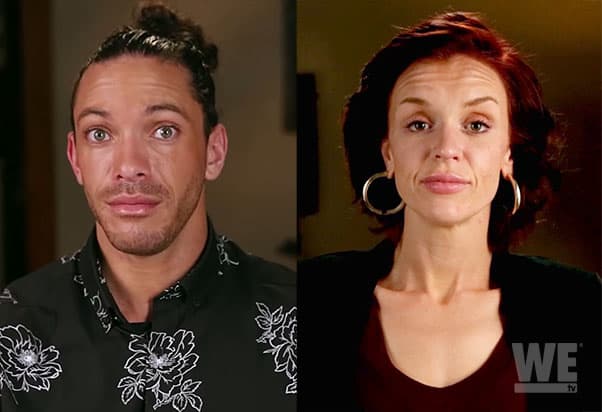 Love After Lockup couple Heather and Dylan dated for five years prior to his release from prison. During that time, Heather became quite enamored with her handsome prison boo, going so far as to have his name tattooed on her in three different places and in multiple languages. She also got a “Mrs. Smith” tattoo on her hand, evidence of her confidence that she would eventually marry Mr. Dylan Smith.

Getting tattoos of a boyfriend or girlfriend is generally not a wise idea, not to mention getting three or four of them. The fact that Heather and Dylan had never spent any time together outside of supervised prison visitation would seemingly make the tattoos (and the confident hope they illustrated) even more ill-advised.

So, did Heather overcome the odds and the multiple skin art jinxes on her way to the happily ever after with Dylan that she was so sure of? No. NOT AT ALL.

Heather recently shared a video of an alleged verbal altercation with Dylan from late last year on Instagram and hurled numerous accusations against Dylan in the caption and comments, including claims that he is gay and a “sexual predator.”

Before I get into Heather’s comments, I feel I should set the stage a little bit. Heather and Dylan have been on the Starcasm radar since July of 2019 after Heather revealed on Twitter that she and Dylan had just filmed their prison release episode. “Catch us on the premier of Love After Lockup season 3 Aug 15!” she shared in another tweet under the since-deleted @MrandMrsDSmith account.

As Love After Lockup fans are well aware, Heather and Dylan did not make it on the season that they were scheduled to appear on. My guess is that the relationship imploded too quickly for producers to get enough footage to include them, but that is purely speculation. (That would also explain why they were introduced so late this season.)

Although it’s not necessarily important in regards to Heather and Dylan’s relationship and her allegations, I also wanted to share that Heather is the mother of at least two children. She does not have custody of either, but is able to see them. (Dylan also hinted on social media prior to being incarcerated that he has children — including a tweet about having a stroller stolen.)

Dylan mentions on the show that his recent prison sentence was from selling ecstasy to an undercover police officer, but prison records indicate that his longest recent sentence (6 years) was from a residential burglary charge. (That charge was much less than the armed robbery and aggravated unlawful restraint charges he was initially facing from the incident.)

Dylan also revealed on the show that he has been arrested 34 times, so it is understandable that there might be some confusion about his sentences. 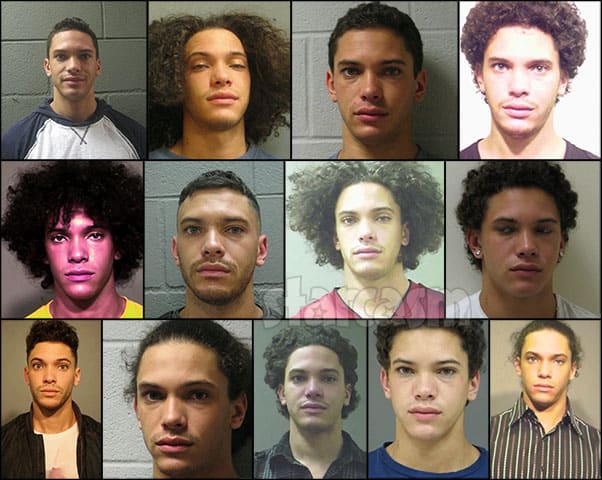 If you’re curious about how Dylan is doing now, he’s currently employed as a salesman for a community solar energy company. I could find no record of him being in any legal trouble since his prison release almost 15 months ago. Given Dylan’s arrest record, that is quite impressive.

Heather has been having a much more difficult time over the past year. She stated last month that she’s been “homeless” and “living out of my car in Airbnb’s and hotels since January.” She says that a lot of the chaos in her life is a direct result of her relationship with Dylan and the abuse that she allegedly suffered. She’s been working for Door Dash in addition to selling clothes online.

On September 22, Heather posted a brief video that appears to include Dylan with a balloon as the two argue about him allegedly abusing her. She says that the video was submitted as evidence for an order of protection filing against Dylan that was eventually denied. Here’s the clip, but be forewarned that it contains adult language:

Heather shared the clip two more times on her Instagram feed and responded to numerous comments with specific allegations about Dylan. Here are some of her interactions:

HEATHER: I was trying to wait til the show aired but I watched a couple podcast/YouTube interviews where he is being praised and they even go as far as to suggest he speak to high school students about his reform. My conscious is clean knowing I did as much as I possibly could to prove the abuse and hopefully save someone else the trouble.

I’ve been dealing with this for almost a year now and the indirect threats, vandals to my car, and heckling just gets worse and more of the show airs. It’s not ok. I’ll gladly pay the price of speaking the truth if I can prevent another woman from a similar experience. That’s really all that matters to me, I want to protect another lady from being in my seat in the future and by no means should this person be speaking to high school students he is a con artist and an abuser. It’s sad and humiliating that I was too brain washed to see what was going on years ago. It’s the frog and the pot of boiling water situation. ❣💯

COMMENT: I’m glad you are away from that situation. Sending you love and positive vibes ♥️♥️

HEATHER: I’m not away from the situation, I’m homeless I’ve been living out of my car in Airbnb’s and hotels since January. I was robbed and abused by him and the judicial system. I submitted this video to a judge seeking order of protection and was DENIED!

COMMENT: You are in my prayers Heather🙏🏼 I am not in the position to help 🙁 but if I could I would! I really hope someone who reads this will give you the help you need… I am so sorry for everything that happened to you, nobody deserves to be treated like this… I hope you are safe❤️

HEATHER: Thank you so much 😊 I am safe and I am prepared to die exposing this man❣ I’m done acting like I’m not a powerful goddess of truth.

I’ve been moving around since January and I can literally feel his energy. I have bad dreams about it still to this day and the only time I feel calm is when I’m working.

In time I will be stronger than ever before!

COMMENT: Oh my God I pray you are out of that situation!!!! 🙏❤ Sending love your way.

HEATHER: I have been homeless since a few weeks before the pandemic. I’m not ok. I need specialized therapy for dealing with sociopaths and psychopaths but it’s very expensive. @wetv and @loveafterlockup_wetv are fully aware of all of this but have chosen to continue to promote Dylan and support him. He is even being paid for this project.

COMMENT: What is going on here chicky? U good?

HEATHER: This is the video that I submitted to judge smith at 555 W Harrison when I was denied my request for an order of protection and unlawfully thrown out of my own apartment last year.

Now @loveafterlockup_wetv is using an altered fake version of my story for profit.

I keep waiting for them to show some integrity but instead they continue to edit my words into false claims and I have grown tired of being quiet.

You can go ahead and sue me @wetv I’m telling the truth of who and what went on.

Dylan Smith is a con artist, he lied to me and drained my energy and finances for five years by offering me false protection from a group of lowlifes called the “lurkers.”

I had NO KNOWLEDGE of Dylan’s previous arrests. Actually when I arrived to do my commentary for the show 8 months after breaking up with Dylan, the producers showed me all of his previous mug shots. His record is sealed.

I was raped by the man Fluid that Dylan has posted video with and the girl Marissa robbed my house and left her hat that had her name embroidered in it.

He had NUMEROUS relationships with other women and men after telling me he was curious I later found out he was NOT curious but rather HIGHLY experienced in coercion and is a sexual predator.

I don’t know how a man on parole can beat a women on camera and a judge in a court of law WHO SAW VIDEO could simply ignore it.

COMMENT: Oh my gosh..I feel @loveafterlockup_wetv should be helping you! I’m so sorry 😣😢

HEATHER: Yea honestly I thought the same. I thought after shooting my commentary they would play the truth but instead the edited my words and played back more and more lies. I’m very sad to say they don’t seem to care at all about what he did/continues to do. I’m just another body to them.

COMMENT: You are in my prayers Heather🙏🏼 I am not in the position to help 🙁 but if i could i would! I really hope someone who reads this will give you the help you need… I am so sorry for everything that happened to you, nobody deserves to be treated like this… I hope you are safe❤️

HEATHER: Thank you so much 😊 I am safe and I am prepared to die exposing this man❣ I’m done acting like I’m not a powerful goddess of truth.

I’ve been moving around since January and I can literally feel his energy. I have bad dreams about it still to this day and the only time I feel calm is when I’m working.

In time I will be stronger than ever before!

COMMENT: But still, pain is pain and it’s not all the same but it’s all kinda the same…

HEATHER: This video is one glimpse of several years of abuse, manipulation, coercion, and brainwashing.
Before meeting him I didn’t even know this type of abuse was possible.

COMMENT: Omg after all you’ve been through then that? Horrendous.

HEATHER: What’s more horrendous than anything is the fact that in during the original shoot I told the network that I was being trafficked by Dylan and coerced and that I didn’t know how to get away from him and rather than helping me they took that as another opportunity to exploit my situation and profit from my abuse ❣

COMMENT: That is just a glimpse, I can’t even imagine what else you’ve gone through. So sorry you even had to go through anything like that 😔

HEATHER: You have no idea. Fortunately I have 6 SIM cards with hours and hours of video and photo along with thousands of letters and other documents that I have been saving since this all started. I am hoping that someone will realize this is going on stand up for what’s right rather than continue to hide the truth.

Find out the unfortunate reason that #LoveAfterLockup star Shavel Moore and her family were featured in a 2012 @NewYorkTimesUSA article. Plus, listen to Shavel's rapping skills performing under her hip hop alias Yellowbone! #LoveAndHipHopAfterLockup https://t.co/YfIMKnaO8G

In addition to her comments on Instagram, Heather has blogged extensively about her relationship with Dylan and the fallout on her website mercifulstorm.com.

To see how Heather and Dylan’s relationship imploded — at least how it imploded according to WE tv — be sure to tune in to new episodes of Love After Lockup airing Friday nights at 9/8c!