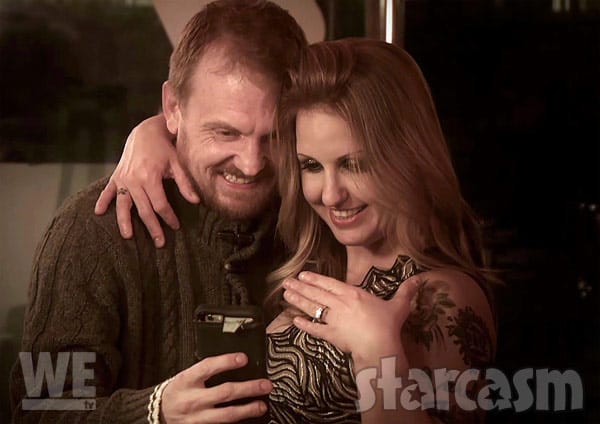 Love After Lockup returns for a second season this Friday, and judging from the preview clips, one of the most dramatic couples promises to be 37-year-old Clint Brady from Hobbs, New Mexico and his potential soulmate, frequent jailbird Tracie from Midland, Texas. If you’re curious to know a little more about what to expect from this couple than the previews show, we’ve gathered together some background info as well as some spoilers — courtesy of Clint himself!

First, let me introduce you to the couple via WE tv’s official bio:

Clint wasn’t having much luck finding his one true soulmate until he tried the website Meet-An-Inmate.com and found Tracie, who was serving time for fraudulent checks and a parole violation. Immediately infatuated by her, he wooed her into a relationship. The two have never met in person, and Clint is eager to marry her as soon as she is released.

WE tv has also released a couple of preview clips just for Clint and Tracie, including one in which Clint reads a love poem that Tracie wrote him while she was incarcerated:

As you can probably tell from that second video, which ends with Clint screaming to producers: “Are you f**king happy? Get this f**king mic off me NOW!” Clint and Tracie’s relationship is anything but smooth sailing. Clint actually shared some major spoilers on Twitter back in May when he reached out to Love After Lockup Season 1 cast member Johnna DiGrigoli to express sympathy for her unfortunate situation with Garrett.

“Hey Johnna. My name is Clint. I will be on Love After Lockup Season 2,” Clint began. He went on to explain that he was reaching out to Johnna to “say I know exactly how u felt when Garrett left u” before revealing that he, too, got his inmate partner’s name tattooed on his arm “like a fool.”

That’s where the similarities in their stories end because, unlike Garrett (who left Johnna for a strip club bartender named Nelly), Tracie opted for different kind of love interest. “My girl left me for crack,” Clint revealed, adding the ? and ? emoji.

In a follow-up tweet, Clint went into more detail about what happened. “She left me for 11 days and did crack and meth but she swears she never cheated on me. I can’t ever ask her any questions about when she left me [because] she gets all defensive.” Clint then pulled in the reins on his tea spillage as he added: “You’ll see what happened on Season 2. It’s sad really.”

Obviously, that was quite a lot of very serious information for Johnna to react to, but I thought she handled it well. “Hi Clint!” she tweeted. “I’m really sorry that you dealt with that but happy that y’all have decided to make it work. I look forward to watching your story when Season 2 comes out!”

Clint quickly deleted his revealing posts, perhaps after show producers caught wind that he was making it rain on Twitter with spoilers. However, he did leave one similarly bitter tweet up from before he tagged Johnna. “If a girl ever cheats on a guy, don’t expect her to ever admit to it,” Clint wrote. “Girls will take their infidelity secrets with them to their grave #fact.”

Since that batch of tweets, Clint has gone all but radio silent about his personal life on social media, with most all of his posts being about sports or politics.

Despite Clint and Tracie’s plan to get married immediately after her release, I could find no marriage record from the past year in either New Mexico, or across the border in Texas. That is certainly not proof that they didn’t get married, but I think it is probably a good indication that they are still single. [UPDATE – The couple DID NOT officially get married just after Tracie’s release in March of 2018, but did tie the knot one year later in Las Vegas.]

However, Clint’s Twitter profile photo looks as thought it might be from either just before or just after their wedding, as both he and Tracie are dressed formally with Tracie showing on some bling on her ring finger. So perhaps they did tie the knot in some manner that I was unable to verify via online records. (I will point out that Clint had the same profile image when he made the tweets to Johnna back in May.)

Here is the picture: 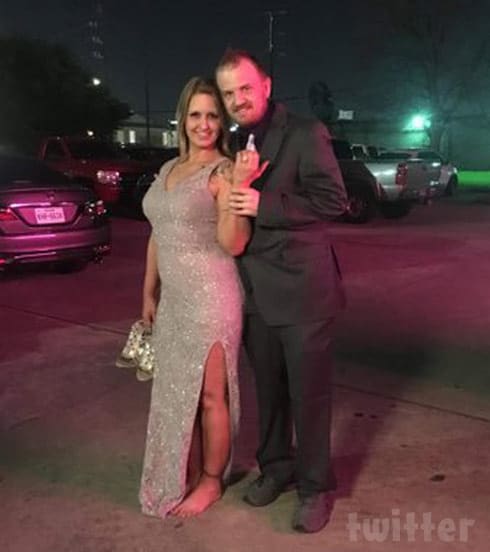 As far as personal background on Clint, he has been married twice before — once in 2002 and again in 2010. Clint has a 16-year-old son with his first wife, and it looks as though she will be appearing on the show this season.

Clint’s second marriage ended tragically when his bride passed away unexpectedly not long after their marriage in June of 2010. I could find no information on what happened.

Also, Tracie isn’t the only one in the relationship who has spent time behind bars! Click here for details on Clint’s arrests, including one DWI incident in which he crashed his truck through a security gate and into a storage unit while hauling a Little Debbie trailer!

Tracie doesn’t appear to have been married before, but she does have a son who is not quite two years old.

We’ve got a lot more info on Clint and Tracie (as well as other Love After Lockup Season 2 cast members) that we will be posting soon, so stay tuned! And be sure to tune in for the Premiere this Friday night at 9/8c on WE tv!

Complete schedule for Love After Lockup ‘Our Story’ episodes