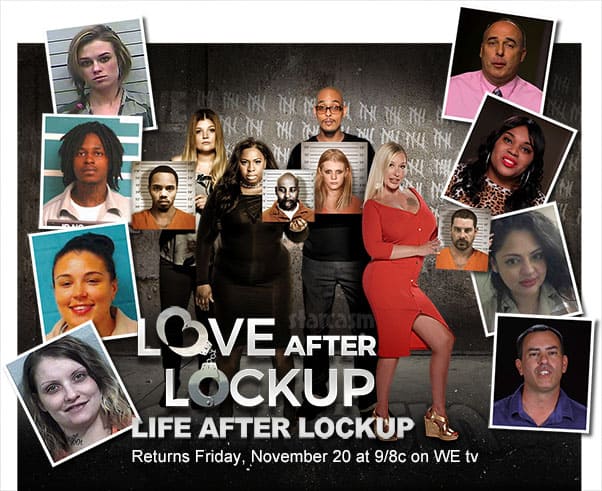 Life After Lockup will premier on Friday, November 20 at 9/8c. The cast includes four returning couples as well as four couples from the current season of Love After Lockup.

“The couples will face plenty of firsts in their new lives together – from new marriages to divorce, new homes to new children, all while living under the challenges of their parole,” the network’s press release reads. “Possible restrictions abound: early curfews, random check-ins, drug tests, travel prohibitions, consorting with ex-cons combined with the temptations of alcohol and drugs, the stakes have never been higher. Will they stay together and stay out of prison?”

And here is a rundown of all of the couples featured this season, with very brief teasers for each:

Shavel continues to smother Quaylon, including snooping his phone and finding something she is not happy about. Her aggression pushes Quaylon back to his mother, and the chances of a marriage proposal seem to be vanishing quickly. Will this couple split, or will they actually tie the knot and end up spending their remaining “yurrs” together?

Lindsey is still living with her Sweet ‘N’ Low sugar daddy Scott, and now her daughter Mylie Grace has moved in as well. The couple’s already-volatile relationship gets even more heated after both dig up dirt on each other from the past. Will they overcome all the animosity? Or will Lindsey simply explode and take off — at a very high speed?

Shawn and Destinie continue to play out the exact same story line they’ve had since the very first episode. Despite literally assaulting Shawn, the couple is apparently still together as the fabled court date looms for habitual hearing-skipper Destinie. Will they get married? Will they split up? Will Shawn get killed just like his co-worker Hector predicted? Will we get through 16 episodes and still be in the exact same place?

OK, this is going to be a very weird sentence… Amber’s former cellmate and big house bae Puppy gets released from prison, and the gals look into the legal ramifications of the fact that Amber’s ex Vincent legally adopted Puppy while she was incarcerated. Amber’s mom is also released, and I’m sure those two will have lots to catch up on — including a bit of reminiscing about how they were both arrested for selling meth out of a Country Inn and Suites in Conyers, Georgia in September of 2015.

Brittany’s on-again, off-again relationship with her mom Cynthia is back on as the Santiago family takes a trip to Alaska to check out her mother’s house that blew up. The preview includes flashing lights and a police helicopter — is the house foreshadowing what’s in store for Brittany’s mom?

2/3 of Love After Lockup‘s first love triangle is back yet again as Michael and Sarah battle for custody of their two children in court. Sarah has a new boyfriend named Malcolm, but does he stand a chance against Michael’s irresistible charm? Could we soon see baby number three for Michael and Sarah?!

Get details on some of the numerous plastic surgery procedures that #LoveAfterLockup star Lacey (aka cam girl Kaci Kash) has undergone, plus see some throwback photos in which she looks dramatically different! 💉🔪 https://t.co/x4K8bzdZ6H

3/3 of another love triangle after lockup will be making a return as Lacey’s lockup Lotharios Shane AND John (aka Chon) are back for more testosterone-fueled flexing. Will they remain out of jail long enough to come to blows this time?

Andrea is supposedly still Mormon, and she tries to convince her son Tennison to follow her faith and go on a mission. However, it appears that Tennison’s true mission is to avoid Mormonism completely. Meanwhile, Lamar and Priscilla team up on a secret that inevitably causes a bit of drama when Andrea finds out.

Be sure to tune in for all the post-incarceratorial drama when Love After Lockup: Life After Lockup returns on Friday, November 20 at 9/8c on WE tv!

LOVE AFTER LOCKUP Is Shawn being catfished by Destinie? SPOILERS

Is Love After Lockup’s Megan really a singer? Give her a listen!