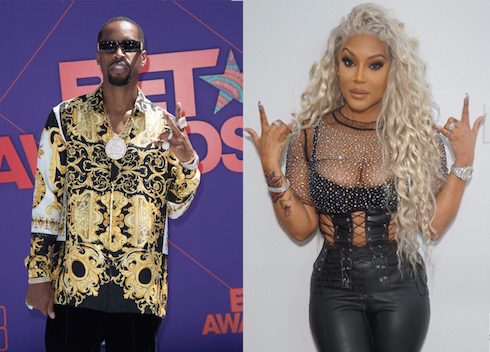 Love & Hip Hop Hollywood has been hitting the Lyrica–Safaree storyline hard during Season 5, and things just came to a head with Safaree appearing to admit he and Lyrica did indeed smash. But did Lyrica really sleep with Safaree…or is the whole thing just a storyline for the show?

The whole situation is complicated and messy as hell — which is part of why the show has been able to milk it so successfully. So we’ll try to unpack it a little bit at a time. First of all, it’s important to remember that Lyrica and A1 were allegedly either separated or on a break for several months earlier this year, as gossip about their divorce heated up. (Lyrica referred to this period in a pre-LHHH Season 5 interview, calling it the time when “I was running around saying I was single.”)

The timing of that alleged separation is key: A1 and Lyrica were apart at the exact time that Safaree blew up the internet with his now-legendary dick pics and full frontal nude clip (which you can check out here, in case you need a refresher). However, LHHH including Safaree’s anaconda during this season is a little suspect, since Safaree appeared to switch casts and join up with LHHNY last year.

So it’s possible that Love & Hip Hop‘s producers didn’t want to wait for LHHNY Season 9 to drop in the fall, and decided to show the world Safaree’s goods this summer instead.

Next, there’s the actual reveal itself. As many fans were quick to point out, Safaree’s admission of guilt to Ray J during last night’s episode didn’t exactly ring true. The constant cutting back and forth between the two men — and their often incompatible facial expressions from cut to cut — made the scene look like it had to be patched together from a lot of different takes:

Of course, patching a scene together is hardly unusual for reality TV. But the more you watch the scene, the harder it is to shake the feeling that something isn’t quite right. Either Safaree is trying to sell a story where he’s a potential homewrecker when Lyrica didn’t really sleep with him, or he’s distracted by Ray J adjusting his hat 75 times in two minutes. (Seriously, go back and watch the number of times Ray J’s hat changes position.)

However, another thing worth keeping in mind is the cheating allegations that have dogged Safaree ever since he was back with Nicki Minaj. Not long after the two of them split, Nicki Minaj took to Twitter to accused Safaree of being unfaithful on Twitter; and not long after Safaree rebounded with model Zashia Santiago, her fans confronted him with allegations he’d cheated on her, too. Which prompted Safaree’s infamous response: “How can a single man cheat? I’m single, I do whatever the f*ck I want.”)

Speaking of infidelity, Love & Hip Hop Hollywood hasn’t even gotten to the alleged sex party A1 was involved with following the Season 4 reunion special taping last year. And the show’s producers wouldn’t bring up Lyrica’s infidelity without getting into A1’s, would they?

Finally: in case you’re curious, here’s the 24-minute Facebook Live interview between Safaree, Lyrica, and Brooke that allegedly set this whole storyline in motion. The interview was taped either just before or just after Season 4 concluded (we haven’t been able to find a firm date). Do you think there’s chemistry between Lyrica and Safaree?

Given that we’re only three episodes into the season, it seems safe to assume that there’s plenty more Lyrica–Safaree drama yet to come.