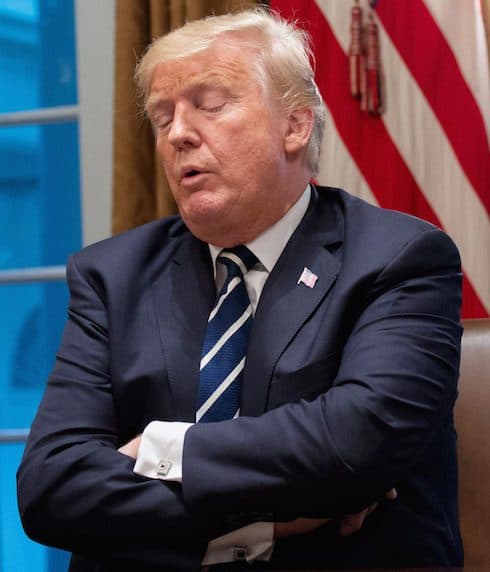 It’s been a rough couple of years for the Hollywood Walk of Fame, which since the election of Donald Trump has become almost synonymous with the vandalism directed at Trump’s star. After the star was destroyed for the third time last month, the West Hollywood City Council voted to remove it entirely. But will Donald Trump lose his Walk of Fame star? Or will he, like similarly beleaguered recipient Bill Cosby, escape the public’s wrath (relatively) unscathed?

A Brief History of Star Destruction

Donald Trump’s star on the Hollywood Walk of Fame has been vandalized many times since Trump kicked off his presidential bid with a promise to rid America’s streets of the Mexican rapists overrunning them. Trump’s Walk of Fame star has also been outright destroyed twice: once in October of 2016 by a man with a sledgehammer; and another time just last month, at 3:30 on a Monday morning by a different man who brought a pickax.

So this just happened again… somebody used a pick axe to destroy Donald Trump's star on the Walk of Fame. Still trying to learn more, but we know it's been vandalized multiple times, just never on this level. @NBCLA ?: Victor Park/Loudlabs pic.twitter.com/lzq7YrsSRV

At least one legislative body has had enough

As we explained at the time, it’s relatively easy to get a star on the Hollywood Walk of Fame. (Trump got his for producing the Miss Universe pageant.) And apparently no one’s star has ever been removed from the Walk.

In the two weeks since Trump’s star’s second destruction, though, there’s been a growing chorus of calls to ditch Trump’s star. And last night, the West Hollywood City Council decided to — sort of — join that chorus. The City Council approved a resolution calling for Trump’s star to be taken off of the Walk (and presumably to replace it with a taco truck, although that language doesn’t appear in the resolution.)

The City Council’s resolution, which you can read on page 10 of their August 6th meeting’s minutes here, is officially called the “Resolution urging the Los Angeles City Council and Hollywood Chamber of Commerce to remove President Donald J. Trump’s star from the Hollywood Walk of Fame.” Here’s the full text:

The City Council will consider adopting a resolution urging the Los Angeles City Council and Hollywood Chamber of Commerce to remove President Donald J. Trump’s star from the Hollywood Walk of Fame, due to his disturbing treatment of women and other actions that do not meet the shared values of the City of West Hollywood, the region, state, and country.

It’s important to note that this is only a resolution, and as such has no legal force. It’s also interesting to note that the City Council resolution specifically references Trump’s “disturbing treatment of women” as the reason his star should be removed, rather than the far more practical and thus politically palatable excuse of “We have no reason to believe people will ever stop smashing this marble to bits.”

Will Donald Trump lose his Walk of Fame star?

But the Hollywood Chamber of Commerce, which administers the Walk of Fame, has weathered the storm of public pressure before. As the Los Angeles Times noted, there were similar calls for the removal of Bill Cosby’s star back in 2015, when the wave of sexual assault allegations against the comedian was still building.

At the time, Leron Gubler, the president of the HCC, told the Times, “Once a star has been added to the walk, it is considered a part of the historic fabric of the Hollywood Walk of Fame. Because of this, we have never removed a star from the walk.”

UPDATE (11:59 AM) – We reached out to Ana Martinez, Producer of the Hollywood Walk of Fame, for comment on the WHCC’s vote. She responded with an official statement from Leon Gubler that reinforces what Gubler told the Times in 2015 — and reiterates the fact that the WHCC resolution has no legal authority over the Walk:

(Photo credits: Will Donald Trump lose his Walk of Fame star via SplashNews.com)

Frosty the Snowman lives in the Sunken Place