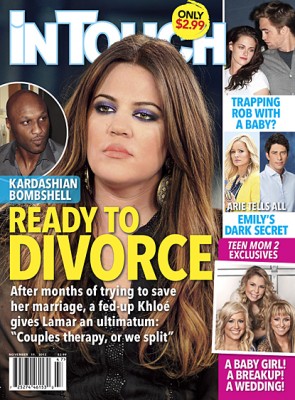 Khloe Kardashian and Lamar Odom are so cute and sweet together, so it was a shock when tabloids started rumbling a few weeks ago that they were headed toward divorce.

Khloe’s team denied these rumors, but it hasn’t stopped them. Star Magazine reported first that there was $67 million divorce going on, and now In Touch has divorce on their cover too. Stop breaking our hearts already!

Is there any truth to trouble in paradise for Khloe and Lam-Lam? 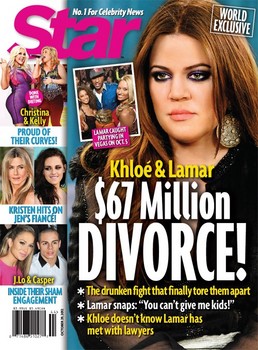 There are no other signs of trouble besides these (pretty detailed) “insider” accounts of strife within the marriage. Lamar recently had a great birthday with Khloe November 6 (that’s right, Lamar’s birthday is election day,) and they marked their three-year wedding anniversary September 27.

The Star Magazine report includes an account of a fight over the fact that Khloe hasn’t been able to conceive yet, and Lamar’s growing frustration over filming Keeping Up With the Kardashians. Khloe and Lamar even had their own spin-off for a while, but they decided to end it soon after Lamar was dropped from the Dallas Mavericks (how much reality filming can people take?)

The In Touch story, published this week, is a little less decisive about impending divorce, and mostly seemed to point out how Khloe sticks by Lamar even through tough times. Again, it talked about issues with Lamar wanting out of the Kardashian brand. The story also pointed out that Lamar had a pretty rough summer in 2011. His 24-year-old cousin was murdered, and on the same day of his funeral, Lamar was riding in a vehicle that killed a 15-year-old pedestrian. Lamar said he had to undergo “spiritual and psychological counseling” to get over that horrific summer, which is completely understandable.

Despite what people may think, Lamar and Khlo live private lives. They do reality shows and things like that but once the cameras are off, they’re very private. They really don’t have many people, other than their families, in their lives. They are fine and are 100-percent not divorcing.”

1. Sure, Khloe and Lamar have some things they may fight over, especially a reality show that intrudes on their lives, but that doesn’t mean that their marriage is doomed.

2. There’s a distinct possibility that the person feeding these stories to the tabloids is just trying to drum up a little interest in that same reality show’s storylines. The Kardashians almost always air their storylines in the press before we see it on the show (and it’s usually a little more dramatic and interesting when we see it on the newstands and online than when we see it play out on TV.)

Here’s to hoping Khloe and Lamar stick it out, and if they’re really upset over reality television, Khloe’s got a sweet new gig hosting The X Factor, so it probably wouldn’t be a big deal to quietly bow out of the show and live their lives more privately.