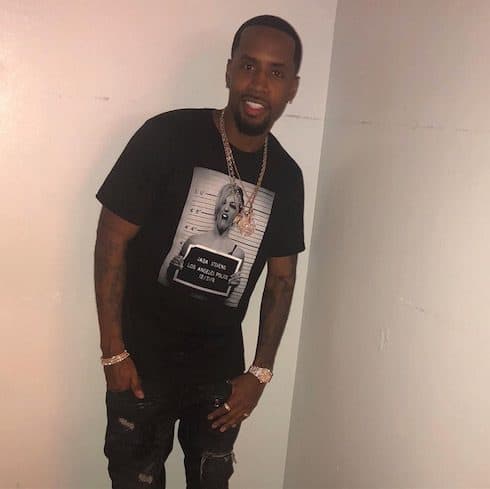 Love & Hip Hop New York star Safaree Samuels is trending in an especially big way today. The long-rumored Safaree nudes have leaked, in the form of a clip of a fully-naked Safaree brandishing his eggplant before a cell phone camera. The identity of the leaker remains unknown, though two prominent suspects have emerged.

(Before we go any further, we should say straight-up that we *can’t* embed the Safaree nudes directly into the post. However, that doesn’t mean we can’t link intrigued viewers to the nudes. So, if you came here hoping to see the increasingly famous clip of Safaree in all his glory, click here.)

The one thing no one seems to know is why the Safaree nudes leaked in the first place, as well as who leaked them. Errant gossip speculated that Safaree’s ex Nicki Minaj may have been responsible, but no one can explain why. Urban Islandz suggested that Safaree himself may have leaked his own nude clip, adding that they “haven’t gotten a response from him since he started trending on Twitter on Sunday evening.”

So far, the best social media reaction to the clip has to be from Twitter handle @YoWadday, who’s since been immortalized on The Shade Room and everything:

Safaree got the Kardashians calling a family meeting. #next pic.twitter.com/NW4XMaAXnY

However, as VH1 pointed out, this is hardly the first time fans and intrigued onlookers have been treated to Safaree’s eggplant. The LHHNY star raised many an eyebrow on Instagram a couple of years back with a workout pic that had less to do with hitting the gym hard and more to do with…well, you see where we’re going here:

Im in the gym for the next 30 days doing 2 a days non stop going hard… If aint aint about money success or anything good holla at me next month!!! #stuntgang #itiswhatitisvol2 #cantlie #guys

We’ll close with Nicki’s 2013 hit “Right By My Side,” which she released shortly before things between she Safaree ended for good. Though it’s Chris Brown that Nicki raps with on the track, fans are hearing the lyric “It ain’t your spit game, it’s your d!ck game that got me walking ’round ready to wear your big chain” a whole new way today:

VIDEO Max the dog and disabled kitten Ralphee are BFFs

LHHNY When is Erica Mena’s due date? She and Safaree confirm pregnancy in surprise videos