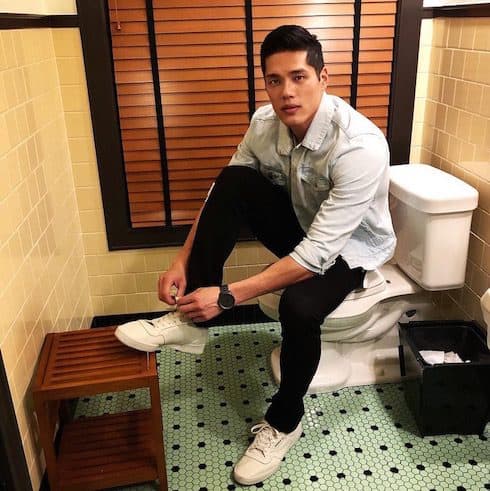 The identity of Kylie Jenner’s baby Stormi’s father has all of a sudden come into question, thanks to a few eyebrow-raising pics of Kylie together with her hot bodyguard Tim Chung. The allegations have gotten so out of hand that they’ve even warranted a response from the Chung family, along with the usual cast of anonymous insiders.

In case you missed the original rumors earlier this week, they’re really quite simple. Thanks to Twitter getting hold of some old photos of Tim looking attractive and holding the car door for Kylie, speculation is now rampant that it’s actually Tim, and not Travis Scott, who got Kylie pregnant with the baby now known as Stormi. (Noticeably absent from all the speculation: What exactly Travis Scott stands to gain by keeping silent and sticking by Kylie’s side.)

Here’s one of the side-by-side tweets that helped the story go viral:

why does Stormi Jenner look like Kylie’s bodyguard? ? pic.twitter.com/9Be005qfhM

The comparison is apparently so remarkable that it’s got Travis’ family asking for a paternity test. Which would actually be the second time that Kylie and Stormi have been linked to an alleged DNA test in the past few weeks; the first was Tyga, who was said to have gotten so annoying about telling Kylie he’s sure he’s Stormi’s father that she granted the test just to shut him up.

And now comes the latest development regarding hot bodyguard Tim Chung. A new report claims that one tabloid was able to get in contact with Tim’s sister, Jenny, who said “I don’t know” when asked if Tim had fathered Stormi. Jenny also said she had no idea there was a “scandal” brewing about Stormi’s parentage. (And, though this wasn’t included in the report, it seems also possible that she, like any other sibling in the history of the world, was not wild about the image of her brother having sex with anybody.)

In related news, Hollywood Life‘s latest take on the semi-scandal is that both Kylie and Travis are “laughing over” the rumor. Their insider says “Kylie thinks it’s hilarious,” and that “Travis even got a huge kick out of it.” Plus, most sensibly of all, the insider added “Babies can look like anyone when they’re that young, so Kylie and Travis think it is stupid that people are drawing that connection.”

It’s a rare day when I find myself agreeing with an anonymous alleged insider, but today is one such instance. The “Baby doesn’t look like me” insecurity has been the basis of too many mediocre movies and terrible sitcom episodes to really take seriously. Then again, it’s also not as if the Kardashians haven’t dealt with this sort of thing before.