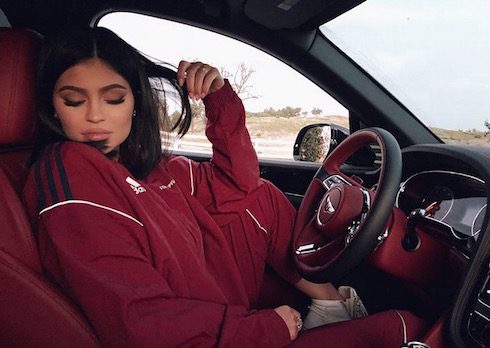 Kylie Jenner made her triumphant return to the land of selfies this week, and her Instagram feed is awash with comments from people who refuse to believe that she didn’t have a little post-pregnancy nip and tuck before sharing the shots. This has, naturally, led to all kinds of Kylie Jenner plastic surgery rumors, and a whole new genre of commentary on her appearance now that she’s a mom.

Before we get to that, though, click through in the embed below and appreciate the other photo that Kylie shared. I can’t quite say why, but I kind of like it? It’s blurry, but not in an artsy or over-the-top way; the blur is actually so quiet that it’s more annoying than anything else. There must be dozens if not hundreds of outtakes from this particular photo session — but, for whatever reason, Kylie looked at this one and said “F*ck it.” Maybe she had to nurse for the third time that day and couldn’t be bothered picking a better shot.

Kardashian home network E! got ahead of the talk by sharing a quote from an anonymous insider who said Kylie “hasn’t started working out yet,” and simply looks great because she’s “eating healthy and taking care of herself.” (E!’s article also revealed that Kylie posed for the above photos while en route to her friend Heather Sanders’ baby shower.)

After that, Hollywood Life piled on with a report related to the latest Kylie Jenner plastic surgery rumors. Their take claims that Kylie has done a complete 180 on her body image since becoming a mom, and “doesn’t care about looking hot all the time now.” From their source:

Kylie’s time out of the spotlight gave her a really well needed break from public living, and helped her to re-evaluate her priorities in life. Kylie basically grew up in front of the cameras—she was only 10 when they started filming Keeping up With the Kardashians—and that put a ton of pressure on her from a really young age to always be extremely conscious of how she looked, at all times….Becoming a mom has taught Kylie not to sweat the small stuff anymore, and to not care so much about what others think about her—especially in regards to how she looks. Now, Kylie’s priority is caring for, and raising, her daughter, and keeping herself fit and healthy, rather than ensuring she looks ‘hot’ at all times.

It would be nice if we could believe this — esepcially since maintaining the persona that is Kylie Jenner has to be exhausting. Kylie was reportedly “miserable” during her pregnancy in part because she had to stay off of social media, which sounds far more like a blessing than a curse and demonstrates what an addiction to social media feedback will do to a person.

But Kylie is more image, now, than woman. And her entire got a billion-dollar business is built on the premise that Kylie Jenner is super hot and looking like her should be your priority. No one’s saying she doesn’t love her baby girl, but no one seriously thinks Kylie is willing to more or less throw her fashion empire away for her daughter, either.