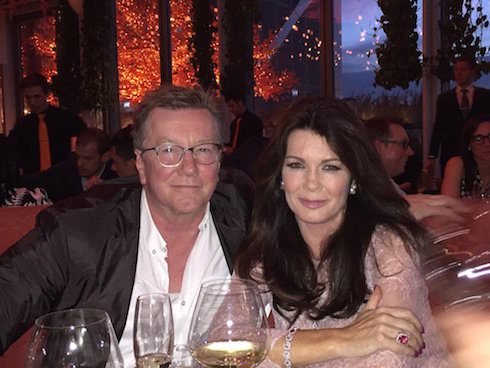 It’s a sad day for Lisa Vanderpump, her family, and Vanderpump Rules fans everywhere. Mark Vanderpump, a DJ and restaurateur, is reportedly dead of an overdose at age 59.

According to UK tabloid the Daily Mail, to whom Lisa gave an official statement, Mark’s body was found at his Gloucestershire home on April 30. Apparently, the fact of an overdose is not in dispute, rather, “it is not yet clear whether the fatal overdose was accidental or deliberate.”

This has come as a shock to us all. My brother and I had connected the day before this tragedy and I was completely unprepared for this. He was my only sibling and I am shocked and saddened by his passing. I am trying to be supportive to his two young sons that he has left behind, and help them get through this tragedy. We appreciate your consideration in this private and extremely difficult family time.

Who was Lisa Vanderpump’s brother Mark?

Mark, who was seen regularly at Lisa’s restaurants Sur, Villa Blanca, and PUMP despite living an ocean and a continent away, was a semi well-known figure in Britain. His wealth and success as a DJ and restaurateur helped him earn a spot on a British reality show about gold diggers — though it appears there may have been a dark side to Mark’s seemingly happy days.

Per the Daily Mail‘s report, a member of the Vanderpump family who lives in the UK and who asked for anonymity said of Mark, “After 22 years of marriage, Mark was living a very colourful life until it all sadly went wrong.”

One of the few times Mark appeared in American tabloid headlines came this past January, following a very public fight with his sister. Reports at the time called it a “rather explosive encounter” between Mark and Lisa at the Waverly Inn in New York City; per an alleged witness, “Lisa and her brother were shouting at each other so [loudly]…the entire restaurant could hear.”

At the climax, Mark “screamed ‘Enough is enough!'” and “slammed his hands on the table.” However, despite numerous tabloid reports, no one could say what exactly the argument was about.

Mark’s Instagram and Twitter profiles depicted a happy lifestyle, one that appeared to accelerate following Mark’s divorce. He was described as a “wealthy Essex businessman and DJ” in a 2016 article promoting his appearance on “Gold Digger and Proud,” a British reality show featuring young women and the sugar daddies who courted them.

Mark featured alongside a 31-year-old Liverpudlian named Laura Boylan, who was initially turned off by Mark when he told her he’d only spent £54 (around $80) on dates so far that year. Mark managed to “win [Laura] over” by tricking her into believing that a £5,000 diamond ring was actually worth £33,000; Mark appeared to seal the deal by then confirming “I will buy [you] a diamond ring for £35,000.”

“I have lots of girlfriends,” Mark added. “I enjoy the company of women and I’m dating four or five women at a time.”

Here’s a selfie Mark took during filming for “Gold Digger and Proud”:

Selfie time during a break for Filming today! Fun day getting up to mischief ???? pic.twitter.com/bghFlljNBW

And here’s an interview with Lisa Vanderpump’s brother Mark and his TV girlfriend Laura promoting their episode on a British chat show in 2016:

It seems Mark’s relationship with Laura wasn’t the only time the divorcée made tabloid headlines. The following year, he was involved in a somewhat bizarre love triangle involving model Gemma Ramsay, and her husband Mike — who, per The Sun, “gave [Gemma] his blessing for her trysts with Mark Vanderpump,” using the logic “It was better to have an adulterous wife than have no mother for our two children.”

Things between Gemma and Mark were apparently so good that Gemma and Mike got into a physical fight while driving after she “taunted [her husband] about how gifted [Mark] was in the sack” and demanded that Mark pay £70,000 “for her boob and nose jobs.”

Said Mike Ramsay to his wife, “The only thing [Mark] feels when he puts his hand in his pocket is his c*ck.” To which Gemma responded, “At least he knows what to do with it.”

On top of all that, Mark was the name and primary force behind a successful line of rosé, introduced in the UK last year:

Check out my new line of Rosé, available in all good wine shops here in U.K.