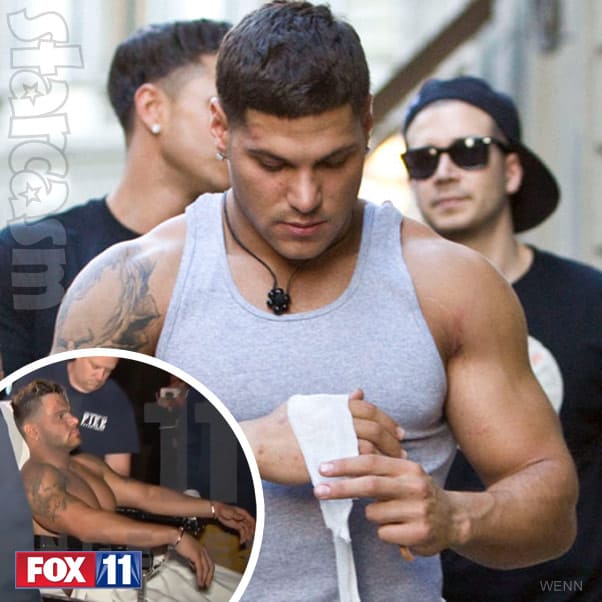 The horrifying details of Ronnie’s arrest were first reported by Fox 11 LA. The site reports that police received multiple 911 calls after 2AM Friday morning reporting a woman running down the street screaming for help. “One witness stated a woman came to her door and saw a shirtless man attack her, police said.”

TMZ later reported that there was also a panic button in the Airbnb that Jen used prior to running outside.

When police arrived on the scene, Ronnie had dropped the knife and locked himself inside the house with the couple’s daughter.

LAPD North Hollywood patrol officers made contact with Ortiz-Magro and ordered him to exit the home, which he refused. Officers believed the child may have been in danger and broke down a door at the home to rescue his 18-month-old daughter from his hands.

Ortiz-Magro was combative with officers and tried to fight them, which caused them to use a Taser to subdue him, LAPD said.

Ortiz-Magro was taken away in an ambulance in handcuffs. He was taken to a hospital to be evaluated.

Here’s a video of Ronnie’s arrest:

Jen told officers on the scene that Ronnie was using cocaine prior to the altercation. She also stated that during their fight, Ronnie allegedly slapped and punched her. That is when she pressed the panic button, ran out of the house, and screamed for help. Ronnie then chased after her, reportedly holding a knife and Ariana.

Ronnie has since been released from the hospital and was booked into custody just before 9AM. He has been charged with felony kidnapping and his bond was set at $100,000. According to online jail records, Ronnie posted his bond moments ago and has been released. His next court date is scheduled for November 1. Prosecutors may file additional charges later, which I assume would include domestic violence.

Ronnie and Jen, who have a history of violent altercations and arrests, had lunch together in Beverly Hills on Thursday. A TMZ cameraman recorded them holding hands and the two confirmed they had reconciled yet again. Later that evening they attended the launch of Verge CBD together, which Ronnie appears to be connected to. I am guessing Verge CBD will be joining JE Cosmetics on the growing heap of failed businesses recently launched by disgraced MTV stars.

Speaking of Jersey Shore and Teen Mom, details from Ronnie’s recent arrest are eerily similar to that of Teen Mom OG star Amber Portwood. In case you missed it, Amber was arrested and charged with felony domestic battery in July after she allegedly went after boyfriend Andrew Glennon with a machete. Andrew was reportedly holding their infant son James at the time.

When posting about Amber, I have stated many times that MTV would certainly have fired her from the show if she were a man who had repeatedly attacked a woman. But, if Ronnie remains on Jersey Shore: Family Vacation, I will officially take back that claim.

I may ire some hatters with this comment, but given what we know about Ronnie and Jen’s relationship, they seem to pose more of a potential danger to their child than Jenelle and David Eason do to their children. In addition to the death of a dog connected to a domestic dispute, Ronnie and Jen have multiple VERY violent altercations, including ones in which Ariana was present. Jenelle and David lost custody of all of their children for more than a month while CPS conducted an investigation. Perhaps there needs to be a similar intervention and investigation on behalf of Ariana?

MTV is reportedly still filming Amber Portwood for Teen Mom OG. It’s unclear if they will be firing Ronnie from Jersey Shore: Family Vacation. If they do, it will certainly appear to be a glaring double standard given the fact that Amber has previously been convicted of felony domestic violence in the presence of a child and Ronnie has not.

Since MTV seems to be OK with their reality stars being involved in multiple instances of domestic violence, maybe they should consider a spin-off featuring Ronnie and Amber. Perhaps a residency series title Celebrity Anger Management With Dr. Drew? 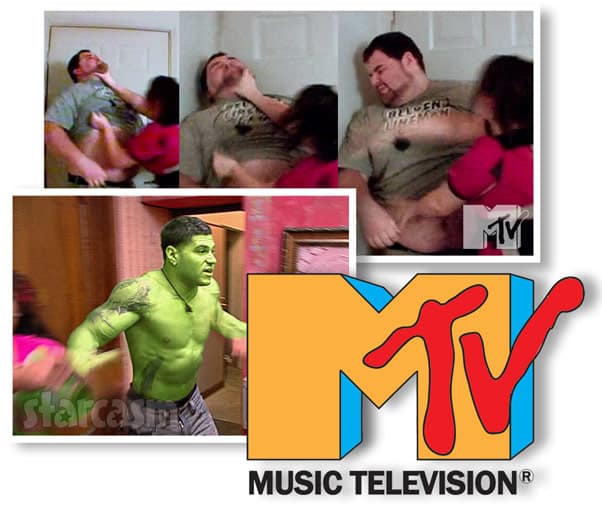 Maybe a logo change is in order?

PHOTOS – Jersey Shore’s Snooki and Jwoww pretend to make out

JWoww on her wedding, kids, and Roger’s skydiving proposal