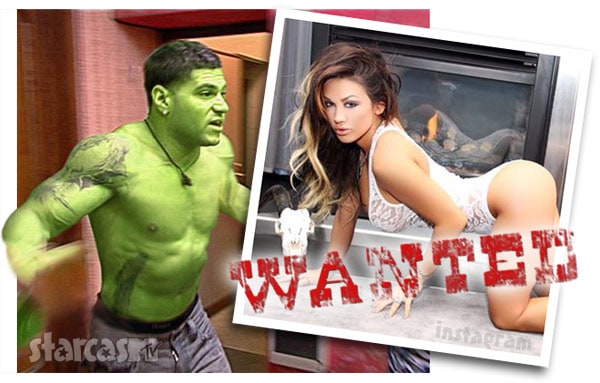 MTV has just begun filming Jersey Shore: Family Vacation Season 2 in Las Vegas, and it looks like show star Ronnie Ortiz-Magro and estranged girlfriend Jen Harley are already providing violent fireworks. The two got into an altercation at Planet Hollywood during which Jen allegedly punched Ronnie in the head and spit on him.

In addition to their continued fighting over their newborn daughter, Ronnie was upset because Jen was supposed to be watching his pit bull while he was filming the show — and was devastated to discover that the dog had died while in Jen’s care.

“Ronnie told police they’d been arguing since Wednesday when he found their dog dead at the bottom of their pool,” TMZ reports.

Us Weekly‘s source says Jen showed up at Ronnie’s hotel unannounced to confront him. “Jen lunged, spit and shoved Ronnie,” the source claims. “Hotel security got involved, who then called the Las Vegas police department.”

Las Vegas Police have confirmed that they were called to the scene, but Jen had already left. “We can confirm that a battery did take place last night at Planet Hollywood at approximately 9:30 pm,” Jay Rivera of the Las Vegas Police Department told Radar Online. “Police arrived on the scene and did determine that there was unlawful contact against the will of another, in this case, against Mr. Ortiz-Magro.”

He added: ““We are going to issue a warrant for her arrest.”

UPDATE – Jen Harley has spoken with People, and her account of what happened during her altercation with Ronnie differs dramatically from previous reports.

“I did not hit him, I did not punch him,” she said, adding: “It was all recorded.” In addition, she said it was her dog, not Ronnie’s that was found dead in the pool.

“She says when she got home, both her and Ortiz-Magro’s dogs were missing;” People reports. “Ortiz-Magro informed her that her dog had drowned in the pool and he had taken to get it cremated. Harley says she is baffled as to how this could have occurred since her dog could swim perfectly.”

People spoke with another source who confirms that Ronnie found Jen’s deceased dog. “He grabbed his dog and put him in a safe spot,” the source says. “Jen thinks he drowned her dog and went crazy trying to find him. She went on a rampage.”

Jen and Ronnie’s altercation comes one day after Ronnie was caught on film getting into a heated altercation with a taunting stranger. Both Ronnie and the stranger had to be restrained by security — all while MTV cameras were rolling.

I have to confess that I got a kick out of all the crazy violent drama on the original Jersey Shore series, mostly because it was usually between consenting — albeit usually drunken — adults not looking to avoid a fight. But Ronnie is a dad now, and in addition to attacking strangers talking sh*t, he’s getting into physical fights with the mother of his child.

MTV is going to have a tough challenge presenting all of this because they cannot simply show The Situation humorously making wide eyes from a safe distance, and then a snarky post-fight interview with cast members with a lens filter, before popping up a domestic violence PSA and going to commercial. There is just too much cultural sensitivity to domestic violence to allow that to be enough

So, will MTV fire Ronnie? I’m sure there are some very serious talks going on right now between MTV and Viacom execs. I assume that they are seriously considering kicking Ronnie off the show simply because he has exhausted so may second chances over the last few months that it seems clear that he is incapable of changing. Here is just a very brief timeline of some of the things we know about, beginning with the birth of his daughter Ariana Sky: 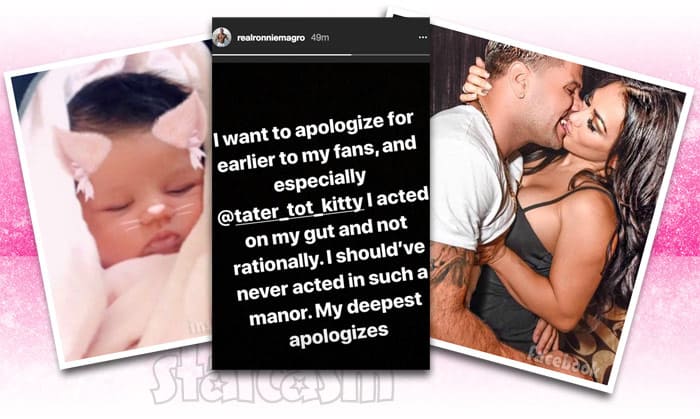 June 8 – Ronnie and Jen get into physical altercation over their daughter and Ronnie’s dog, which was found dead at the bottom of his pool while in Jen’s care

My guess is that the cast and crew will stage an intervention and we will see Ronnie head off to a rehabilitation facility for anger management. Since they just started filming, Ronnie might even be able to complete his stint and have an emotional return before the season wraps filming. If that’s the case,Ronnie is under such intense media scrutiny right now that they will not be able to keep the media from finding out. So stay tuned!

VIDEO Snooki teaches Matt Lauer all about the weenis