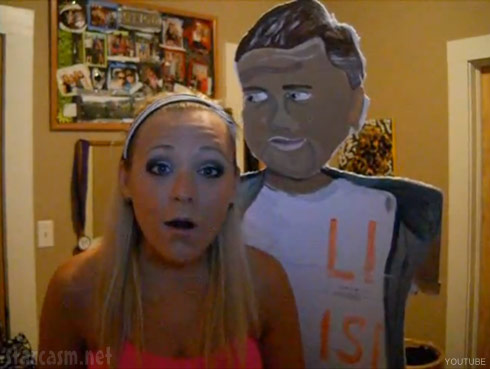 It seems that what happens in Florence eventually winds up on Youtube. Mike “The Situation” Sorrentino infamously hooked up with a set of twin blonde university of Florida college students in Florence, Italy while filming Jersey Shore Season 4, and now one of the twins, Brittany Taltos, is kissing and telling about her sexperiences on Youtube.

The main thing Brittany wants us all to know is that when it comes to The Situation “in the sack,” there is no “twinning” going on. Too vague? I’ll let Brittany clarify.

“His name is The Situation because – it’s not his abs, like, it has nothing to do with his abs,” she says in the clip. “‘The Situation’ is his ball sack. The ‘situation’ is he has one ball.”

So his meatball has no wingman?!? TMI! TMI! I guess I’m just glad Brittany didn’t hook up with The Unit, there’s no telling what his nickname actually means!

Here’s the full clip, co-starring a painted cardboard standee of The Situation:

In case you couldn’t watch the clip because of your phone or because you’re workplace has Youtube blocked, here’s what Brittany had to say – along with a seemingly appropriate photo of Brittany and her twin sister Erica playing around on an apparent replica of The Situation:

“For the first two weeks that I was hooking up with The Situation, I swear to freaking god that he had one ball.

“I was so excited to come back to America and be like, ‘Listen America, I figured out The Situation, and like, I took one for the frickin’ team!’

“The reason I didn’t tell anybody was because MTV made it clear that if I disclosed anything about the cast or the plot of Jersey Shore that I would be fined three million Euro. I was like, ‘Uhhhhh – Oh sh!t!’ I don’t even have like two dollars in my wallet. I was like frickin’ broke when I was in Italy.

“His name is The Situation because – it’s not his abs, like, it has nothing to do with his abs. ‘The Situation’ is his ball sack. The ‘situation’ is he has one ball. He’s uno – uno loner ball is like riding fricking solo in the sack. That’s the equivalent to a chick with like one boob. Like, that’s crazy!

“Behind all that stupidity and lack of brain – he’s lacking a ball. So, it’s just really sad that we’re here like making fun of him, but like this is a serious situation.

“I wouldn’t be surprised if, um, I was mistaken, or, I don’t know. But it was my opinion all these statements made are claims by me and they’re not proven – not proven. I’m a pretty damn reliable source. So, if you want to go around telling people that The Situation has one ball, like, I give you permission. You just have to make a little exclusion note saying saying, like, ‘There is a 90% chance that The Situation does have one ball, but there’s still that 10% that he might have two.’ I’m not 100% sure. That’s all that I have to say.”

If you are like The Situation and want even more of Brittany, here’s her first video in which she addresses all the Taltos twins haters. (WARNING – There is a bit of profanity in this one)