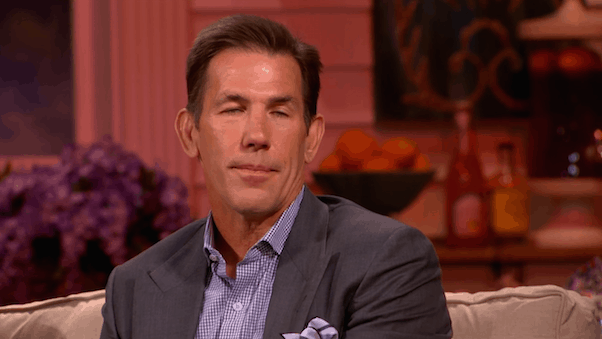 Former Southern Charm star Thomas Ravenel has been among the very hottest of messes since his high-profile legal troubles began. But the show has allegedly hit a wall filming its new season — so is Thomas Ravenel coming back to Southern Charm, despite leaving in disgrace not two years ago?

We should point out that so far it’s Thomas and Southern Charm‘s cast members who’ve been stoking the fires under this particular rumor. And we’ll start with Thomas’ latest public comment on the matter, which as we noted earlier today kind of sounds like he’s simply protesting too much. In an exchange with a fan on Instagram, Thomas may have overstated his refusal to return to Southern Charm over some sort of disagreement about why he left the show in the first place.

When the fan asked if there was any truth behind the gossip, Thomas’ alleged account had this to say:

None [truth to the rumor he’s returning to the show]. Was asked again yesterday and responded with a resounding no! Yet #fakenews People.com will keep saying I was fired. They’re disgusting.

Maybe Thomas was speaking generally when he used People as an example of so-called fake news? I didn’t do a deep dive into their 1400 stories on or featuring Thomas, but they didn’t appear to say he’d been fired from Southern Charm at any point. In fact, the publication’s article on the end of Ravenel’s time on the show specifically says that he “quit” in conjunction with his arrest for assault and battery and his now-settled sexual assault of his kids’ nanny.

Back to the Instagram exchange — when asked if he would return to Southern Charm at *any* price, Thomas didn’t say no, or even respond to the question directly. Instead, he pivoted to what the consequence of his return would allegedly be for his family: “My family did an intervention (I’m the youngest of 6 children) and said that they’d disown me if I ever did another episode.”

However! We say this exchange came from Ravenel’s “alleged account” because, as The Ashley pointed out, the Instagram account @thomasjonathanjravenel “is neither verified nor is it followed by Thomas’ baby mama Kathryn Dennis or Ravenel family friend Eliza Limehouse.” And it’s got a strange bio to boot. *And* it’s a private account. (On that note: if you happen to be friends with this account, screenshots are always welcome.)

In case you’ve forgotten, the gossip over “Is Thomas Ravenel coming back to Southern Charm” began late last year, after cast member Cameran Eubanks hinted at Ravenel’s return for Entertainment Tonight. “I said last season that [Ashley Jacobs] would not be back, and she was back….So, I am not gonna say — I’m gonna say, never say never. I think she could be back and, you know what? It wouldn’t surprise me if Thomas came back.”

Of course, the thing making this rumor seem more likely than usual is the corresponding rumor that filming for Southern Charm Season 7 has been a complete disaster. As we wrote a few weeks ago, a Bravo blind item indicated that the network, after seeing very early test footage for one of its established shows, took the unprecedented step of ordering the footage scrapped and telling the production company to start over from scratch. The show wasn’t named, but, thanks to a few other details, it looked like Southern Charm was the one in question. And bringing back a very controversial former cast member might be one way to please the network and ensure ratings success.

(Photo credit: Is Thomas Ravenel coming back to Southern Charm via Bravo)

Erica Mena back on LHHATL for Season 8, might be dating Safaree