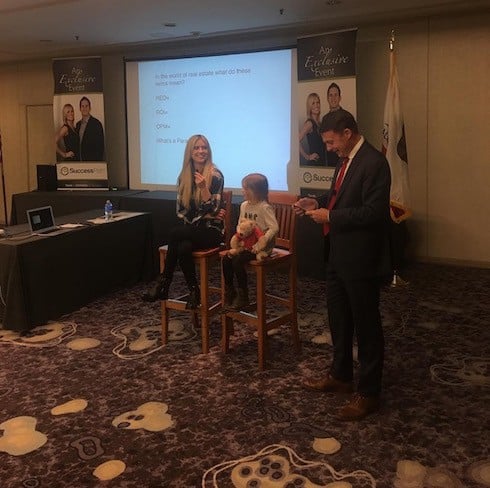 The latest Tarek and Christina divorce update sees things between the Flip or Flop stars getting very ugly indeed. A pair of new tabloid reports has the El Moussas slinging insults and insinuations at each other, culminating in an alleged rape threat that had Tarek turning to social media to defend himself.

For starters, Us Weekly‘s latest take on the situation claims that Christina thinks Tarek “is an absolute pig.” The publication’s anonymous source went on to explain that tensions on set–Flip or Flop is currently filming its final episodes, which will air later in 2017-have become nearly unbearable, and that the couple apparently can’t split fast enough. “The mood differs day to day, but Christina avoids Tarek,” said the source. “He does things to piss her off, like bragging loudly about sleeping with girls.”

However, things got considerably darker when Life & Style jumped into the gossip. Their take on the situation involves an apparent eyewitness to Tarek’s “most horrifying assault” on Christina, which involves a rape threat Tarek is said to have made some years ago in the middle of filming. From their article:

In front of Flip or Flop’s crew, the HGTV star threatened to rape Christina.He intended it as a joke, says the eyewitness, but it left those who heard it appalled.

He told the mother of his two children, “‘Shut up, woman, or I’ll rape you.’ He actually joked about raping Christina on more than one occasion. Tarek thinks it’s funny,” the eyewitness shares. But no one else thought it was, and the crew did their best to shield her from him.

In fact…there was even a discussion last spring during which “the crew was asked to be efficient with takes so that there was no downtime for Tarek and Christina on set,” the source recalls. “When there’s downtime, bad things happen.”

Those allegations inspired Tarek to take a stand on Instagram…

…where, the rest of the time, both he and Christina maintain that they’re keeping things all about the two children they had together.

Every #night me and the #love of my #life do #storytime and I caress her to sleep!! Best #feeling in the world!! Such an #amazing little girl #daddy #loves #you!!!

Flip or Flop continues to air Thursday nights at 9 on HGTV.

Kendall and Blake Griffin wore sweatpants to dinner together, may be boning