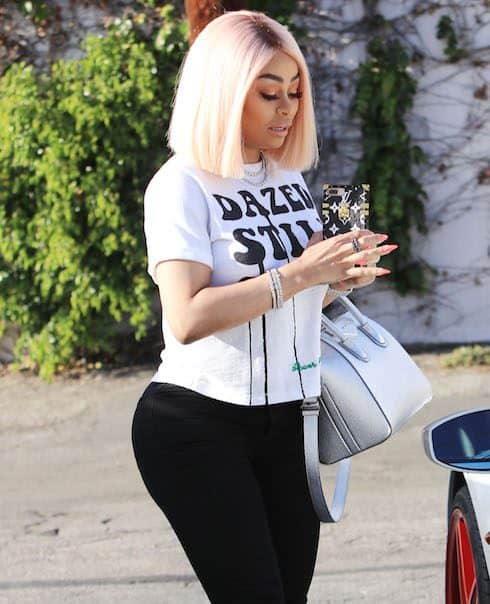 When rumors of Blac Chyna’s alleged latest pregnancy broke a few weeks ago, they didn’t look nearly as substantial as they do now. Now, thanks to Blac sporting what sure seems like a huge baby bump, the rumors are back — but is Blac Chyna really pregnant again? Or was she just very hungry before putting on a tight dress?

In case you missed them the first time around, this past April, 30-year-old Blac was said to have gotten “very quickly pregnant” by YBN Almighty Jay, her 18-year-old boyfriend of a few weeks. At the time, Blac apparently drew attention to what a group of gawking fans thought was a baby bump beneath her baggy sweatshirt, pointed at the bump and the fans, and smiled.

Fast forward to this past Friday, when Blac stepped out for she and Tyga’s son King Cairo’s kindergarden graduation sporting an unexpectedly prominent tummy. The Shade Room said all with only emojis:

#BlacChyna on her way to her son King’s graduation today ???: Backgrid

By contrast, the photo at the top of the article — the most recent one for which we could get the rights — was snapped on April 19. While Blac hardly has a baby bump in that pic, it is worth noting that the normally photographer-friendly Blac has been seen in public a great deal less than usual over the last few weeks.

Looking at Blac’s Instagram, though, you’d think that TSR’s pics have been photoshopped. For example, here’s the most recent full-length image of herself that Blac has shared. Though the upload is dated June 10…

…we can’t help wondering whether Blac is going the Kylie Jenner route and posting weeks-old photos that look at least plausibly current. Would those roses still be in bloom in Southern California in June? Would the flowers on this bush in an upload dated June 8th — the same day as King Cairo’s graduation? Are we maybe looking too hard for a rabbit hole to fall down?

Blac has been in headlines several times this year, all of them related to either children or the making of children. This past spring, she raised eyebrows and drew assorted laughter after throwing a stroller during a brawl at a southern California Six Flags — the fallout from which was that Blac lost the endorsement she’d had with a stroller company.

Before that, she was the victim of a sex tape leak, one that rumors claimed she leaked herself. And her child support battle with Rob Kardashian over the $20,000 per month he’s required to pay her has threatened to reignite at several points.

As of this writing, neither Blac nor her reps have commented publicly on her public-seeming baby bump. We’ll update the post when and if they do.