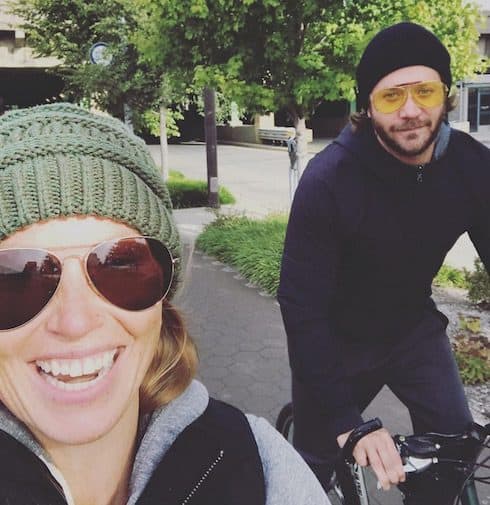 2018 is shaping up to be an HGTV pregnancy bonanza! In addition to Erin and Ben Napier of Home Town welcoming their adorable little girl Helen last month and Fixer Upper‘s Joanna and Chip Gaines announcing baby #5, now we’ve got confirmation that Good Bones‘ Mina Starsiak is pregnant!

Mina and her husband Steve just revealed the pregnancy with a mock movie poster that somehow manages to be both over-the-top and completely adorable. (And we really do mean “just revealed”: Mina shared the news on Instagram an hour ago.) The pregnancy announcement promises a film entitled “Hawk: Party of 6,” and the text at the bottom of the poster, where acting and directing credits would normally go, shares the details: “We are really EXCITED and OVERJOYED that together we finally get to ANNOUNCE that this SUMMER we are expecting A BABY.”

And, as good dog people do, Mina and Steve count their three pups — “B the Boss, Frank the Tank, and Sophie the Pig” — as family members. Here’s the announcement, in all its cinematic glory:

???? @srhawk2003 and I are suuuper excited to finally announce…. Baby Hawk coming 2018!!!! ?? We’re thrilled for this first baby journey and that we’re going to be able to share it all with YOU! Special episode of our forever home build for baby is in the works!!!! Stay tuned!!!

Honestly, my favorite touch is Mina doubling down on her “It’s not a food baby” shirt with a slice of pizza a and a slight smirk. But Steve’s shocked look — as devotées of he and Mina’s social media posts know, Steve will be anything but a stereotypically overwhelmed papa — is a close second

Mina and Steve’s baby is due this August, so their second wedding anniversary is the last one they’ll get to celebrate before the little one arrives. Though it’s also not as if either Mina or Steve are new to parenting: though this will be their first child, the two have been fostering a little girl named Julie almost as long as they’ve been married.

Congratulations to Mina and Steve! Hopefully we might get to see a little of the family reveal when Good Bones Season 3 drops later this year 🙂