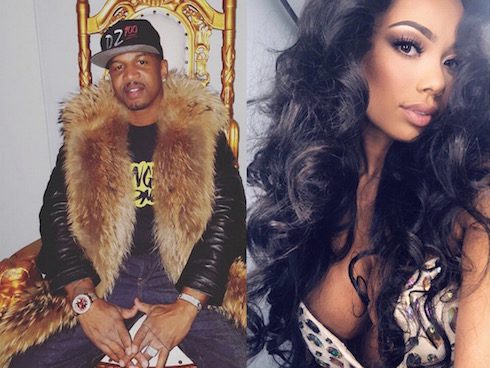 They’ve certainly had their share of differences this season — but did Stevie J assault Erica Mena at the LHHATL reunion taping last week? According to several reputable sources, Stevie lashed put physically against Erica, and used a gay slur against Erica’s son King Conde. Now, Stevie reportedly faces termination from the show.

Did Stevie J assault Erica Mena at the LHHATL reunion?

BET has reported the tea that social media already spilled. According to their take, things at the reunion “got extremely intense” between Stevie J and Erica Mena. Their season-long beef “came to a new level of petty when Stevie allegedly called [Erica]’s son King Conde a ‘f*ggot’ in response to severe shade Mena threw his way.”

But that wasn’t the end of it. A report from Atlanta Black Star further claims that Erica slapped Stevie after he dropped the insult — and that “security had to pull the 46-year-old off [Erica].”

Stevie “was then asked to leave the building.” He’s now under investigation by Love & Hip Hop Atlanta‘s producers, “banned from attending any” LHHATL events until further notice, and “is reportedly on the brink of getting fired.”

After the alleged fight, Erica took to Instagram to call Stevie a “b!tch” who “likes to fight girls.” She quickly deleted the post — but not before it was picked up by several fan pages. Here’s Erica’s video via @pjalene311, along with that account’s extended breakdown of the situation:

LGBT about to drag Stevie J, who was fired for putting the paws on #ericamena Love & Hip Hop's firing of Stevie is "pending further investigation." They're reviewing the video footage to determine what FINAL steps that they can do under his contract. What happened? hearing reports Stevie appeared to ASSAULT Erica Mena – and allegedly went on a disturbing hate filled tirade against her – and her 11 year old son. Stevie called the innocent young man a "f*ggot." The incident was so bad that SECURITY had to pull Stevie off of Erica – and force him to leave the building. Here's Erica revealing account of what happened The reunion show was filled with drama – as most reunion shows are – but what happened last night was CRAZY. Security had to be called in – to pull Stevie and Erica APART from each other. Shortly after the reunion show stopped filming – Stevie continued on his VIOLENT SPREE. He and Brittany later PULLED UP at an event where Jhonni Braze was performing – and they BEAT her (Erica Mena) up too. #loveandhiphop #lovandhiphopat #steviej #ericamena #menamondays #hiphopnews #hiphopweekly #celebritytea #celebritynews #celebritygossip #bmoremusic #bmorerapper #dmvhiphop #hiphop #bmorehiphop

Current reports of Stevie and Erica’s fight also jive with earlier tea from two of the most reputable Love & Hip Hop fan accounts. The day of the reunion taping, the good people at @BestRealityBlog teased an altercation of some kind between Stevie and Erica, without offering specifics. (It’s worth mentioning that reunion tea often starts out general and gets more specific in the first few days after the taping.)

Erica Mena vs @hitmansteviej at the #LHHATL reunion!

The next day, noted tea spillers @lnhhfights appeared to confirm the basic facts of the fight:

Erica Mena & Stevie J got into a HEATED argument at the reunion which resulted in Stevie calling Erica's son a f*ggot & Erica said that Stevie left the building ?☕

Stevie has been in this position before

Unfortunately, this is not the first time that Stevie J has used gay slurs against his fellow LHHATL cast members and / or their families. Stevie, who just avoided jail time in his ongoing child support case, was widely condemned for his comments about Mimi Faust dating a woman during LHHATL Season 5. At the time, Stevie said he didn’t “want his little girl being raised in a lesbian household”; following the backlash, Stevie appeared to walk back his comments, though he never formally recanted them.

Nor is this the first time that Stevie has been linked to rumors claiming he’s done on LHHATL. Following Season 5, VH1 allegedly chose not to renew Stevie’s contract — along with that of his baby mama Joseline Hernandez — and for awhile it looked like his Love & Hip Hop days were done.