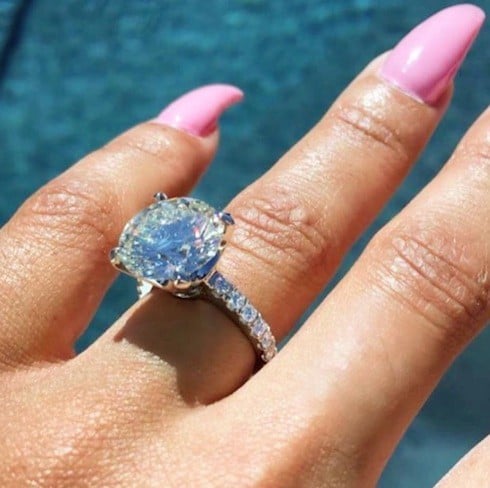 The Rob Kardashian and Blac Chyna engagement is just over a day old, and the couple’s closest friends and family couldn’t be happier for the couple! The pair made their intentions official in a series of surprise social media updates yesterday, and, since then, congratulations and well-wishes have trickled in from some surprising corners.

Perhaps no reaction was more unexpected–or more kind–than that of Blac Chyna’s ex Tyga. The pair have a son together, but haven’t always been on the best of terms, thanks to Blac’s contentious relationship with Tyga’s girlfriend Kylie Jenner. However, in a series of tweets, Tyga made it clear he only wants what’s best for Blac and Rob:

Everybody deserves 2 be happy. What some1 does for their happiness is not my concern, as long as it’s not interfering wit my happiness.

It makes me happy to see the mother of my son happy.My only concern in this situation is my son. I want him in happy environments.

He’s innocent in this. & I want him to feel as much love as possible.

Only an evil heart would direct negativity at a child & make fun of him for being in a situation that is out of his control.

When u been blessed how I’ve been, & create some1 u love unconditional, u’ll understand how I feel. Ull want to protect that blessing.

Cherish yo own blessings and stop hating mine.

On the other hand, Blac Chyna’s mom wasn’t quite as gracious. The always-entertaining Tokyo Toni let her feelings be known on Instagram–and, though her account is private, The Shade Room got a screencap of the post:

Blac Chyna’s BFF Amber Rose–who’s also had her share of clashes with the Kardashians–kept things loving with her own update:

Congratulations to my Family @blacchyna and @robkardashian!!! ???Pease don’t let nothing or no one tear u guys apart! I never seen my sis so happy and I couldn’t be more happy for her! Sometimes we find love in the strangest places ? Lol God Bless you 2! Now let’s get this wedding together so y’all can start making some babies ???????? #TrueLove #putaringonitsouknowitsreal #BlacRob

One group of people that hasn’t yet said anything about the Rob Kardashian and Blac Chyna engagement? The Kardashian family itself. Though each member of the clan has updated social media (in some cases several times) since the announcement, no one has wished the couple congratulations–or, for that matter, said anything disparaging.

However, the man who fashioned Blac’s gigantic engagement ring was quick to capitalize on the moment with his own well-wishes. Noted jeweller Ben Baller–formerly Ben Yang–cut the ring’s seven (7!) karat diamong according to Rob’s wishes, and shared a shot of it on Instagram:

Congrats to @RobKardashian & @BlacChyna on getting engaged. Rob, I have never seen you this happy before and I’ve known you since you were a teenager. I’m glad you came to your day 1 homie to get this massive? for your lady. You know I don’t play when it comes to diamonds. God bless #7Carats #VVS #IFANDCO #BlacChyna #RobKardashian ??????