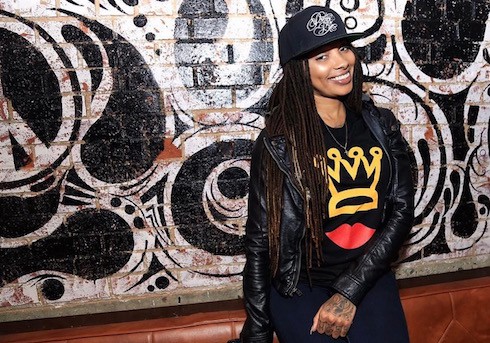 Black Ink Crew‘s Dutchess has been on the outs with former flame Ceaser for weeks–and a major reason why, as Ceaser is about to find out, is because Dutchess got a new boyfriend while leading Ceaser to believe she was still with him. As we reported earlier this year, Dutchess’ new boyfriend is Zack Sanchez, of the NFL’s Carolina Panthers; the two went public while on a beach vacation together this winter.

Adding fuel to this particular dramatic flame is the fact that the Black Ink cameras were apparently trained right on Ceaser as he found out about Dutchess and Zack. Take a look for yourself and judge whether his reaction seems genuine:

RELATED: Black Ink Crew’s Dutchess has two on the side, and one claims he’s the real reason for the Ceaser split

Speaking of real-deal relationships, it seems it’s possible that Dutchess’ new boyfriend is no more–either that, or they’re keeping things way down low since the story broke. Neither Dutchess nor Zack have shared any more photos or video clips of the two of them to their social media accounts for several weeks.

FYI, in case you needed a refresher, here’s what Dutchess’ new boyfriend Zack Sanchez looks like:

WCW … the two women tht raised me .. my beautiful Tia and mama … glad I got the funds to give them the best Christmas presents this year even tho I still think it ain't enough for all they done for me .. love these two ladies wit everythin I got and will give them the world slowly but surely ??

We should come closer to finding out whether Dutchess and Zack Sanchez are still together when Black Ink Crew airs Wednesday nights at 8 on VH1.