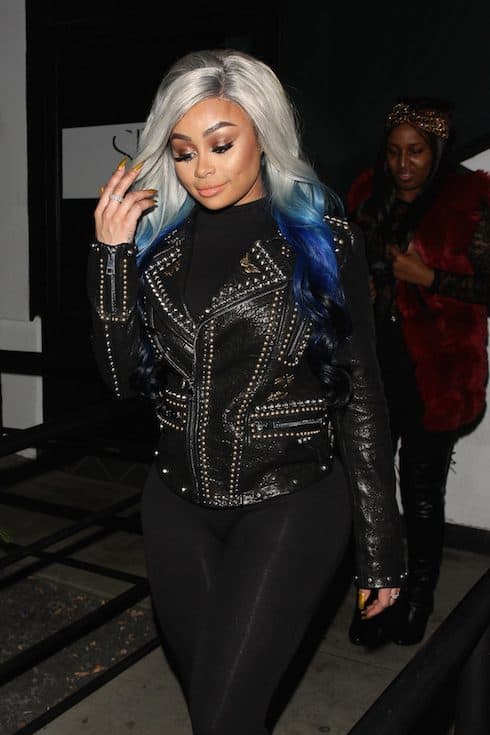 No, it wasn’t an April Fool’s Day prank: that really was Blac Chyna and her crew throwing down against another group at a southern California Six Flags this weekend. Footage of Blac using her daughter’s stroller as a weapon has (understandably) gone viral — just as the real reason for the brawl has apparently emerged.

According to UK tabloid the Daily Mail, Blac flew into a protective mama rage when another woman “started admiring” Blac’s one-year-old daughter Dream “and then rubbed the little girl’s hand.” Blac then tried to throw Dream and King Cairo’s pink stroller at the woman, before “multiple people” rushed in to hold Blac back.

Though the Blac Chyna fight was captured on cell phone video by several interested / stunned amusement-seekers, the most widely circulated videos were shot by Twitter user Alicia Angiee. Here they are, in chronological order:

I’m at 6 flags and I see Blac Chyna and her crew trying to fight ?? pic.twitter.com/iuEdiYKl95

Shortly after the Blac Chyna fight evaporated, the 29-year-old mother of two took to Instagram for a since-deleted post explaining her side of the story. “Being famous is hard enough dealing with scrutiny but when someone feels comfortable to come and touch your child it’s a whole other story,” Blac wrote. “I do not condone violence nor am I a violence person but shout out to all of the amazing mothers out there that will protect their children at all cost. Love, King and Dreams Mommy.”

It’s not clear why Blac decided she needed to delete the post. Shortly after she did, though, Blac replaced it with a sweet clip of Dream snuggling her big brother King:

Additionally, the crew over at Fameolous apparently found the woman responsible for setting the whole Blac Chyna fight off by trying to touch Dream’s hand. According to the string of tweets / DMs they’ve got, the woman thought Blac “was the nanny [because] she rolled the baby” over.

Then, after the woman said “Aww hi little baby you’re so cute” and “rub[bed] her little hand,” Blac responded “Don’t f!cking touch the kid bro.” The anonymous woman asked “Excuse me, did you have a problem with me touching your baby?” And thus began the brawl.

Blac Chyna was last in headlines when footage of her sex tape with Mechie leaked this past winter. Before that, there was talk of Blac joining up with one of the Love & Hip Hop franchises, though talks apparently fizzled.