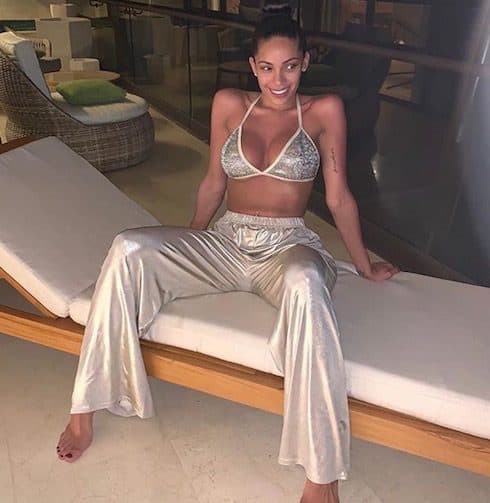 We’ve gotten confirmation of Erica Mena back on LHHATL for Season 8 when the show returns in 2019. Filming is already underway for new episodes — and also included in the cast is Stevie J, who’s back despite allegedly being fired for attacking Erica at the reunion special earlier this year.

The always-reliable @BestRealityBlog was the first to report Erica’s return. Erica made her Love & Hip Hop Atlanta debut with Season 7, and was immediately dragged for coming back to the franchise after claiming years ago that she would only do so if she were broke.

Erica’s storyline involving Stevie and Estelita also seemed to be one of the least well-received during the most recent season. But it looks like Erica’s trying to avoid a repeat of that problem by booing herself up with Safaree Samuels. The two have been spotted courtside at NBA games and on other, more discreet dates over the past few weeks.

And it looks like Erica joined Safaree for the LHHNY Season 9 cast trip to Costa Rica, which just finished filming. Most of her recent updates have come from Costa Rica — including this one, in which she clearly has no regrets about the trip or any of the gossip:

The only thing I did wrong was stay too long. ✨ coverup: @fashionnova

Meanwhile, it seems that Stevie J hasn’t been fired after all. Though rumors about his firing swirled for weeks, never got specific confirmation on whether the OG LHHATL cast member actually did assault Erica this past summer.

But it looks like those rumors were untrue to the satisfaction of VH1. Instagram fan page @stevieandfaith picked up Stevie J’s IG story featuring a video of himself, Lil Scrappy, and Young Joc on set before filming for LHHATL Season 8. Unless Stevie is just hanging around on the set, it looks like he’s back:

And, since we’ve got Erica Mena back on LHHATL as well, maybe we’ll get a closer look at the drama between herself and Clifford Dixon this fall. Erica was arrested for marijuana possession after the cops arrived at her house to break up a domestic incident in which Clifford was also arrested, on a charge of “Criminal Trespass — Family Violence.” (Read our full report — including the police report — here.)

Love & Hip Hop Atlanta Season 8 is expected to premiere in the spring of 2019.