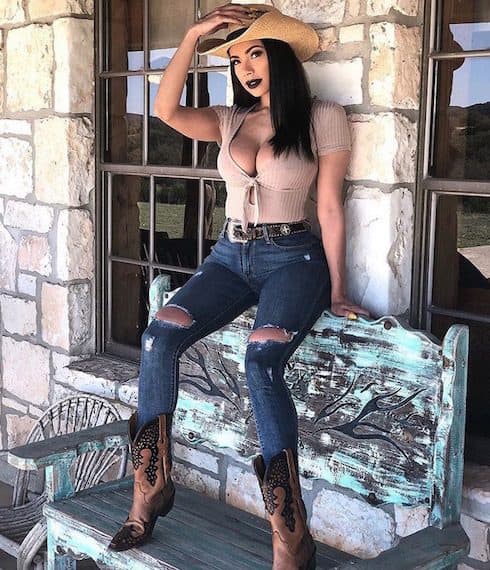 Erica Mena’s net worth is a hot topic of conversation following her Love & Hip Hop Atlanta debut, thanks to a since-deleted tweet in which Erica said the only reason she would go back to the show is for money. But was Erica just talking in the heat of the moment, or is she really broke?

First of all, here’s the now-infamous tweet, which Erica wrote almost exactly one year before the premiere of LHHATL Season 7. It’s been picked up just about everywhere; our screengrab comes courtesy of the diligent crew at Best Reality Blog: 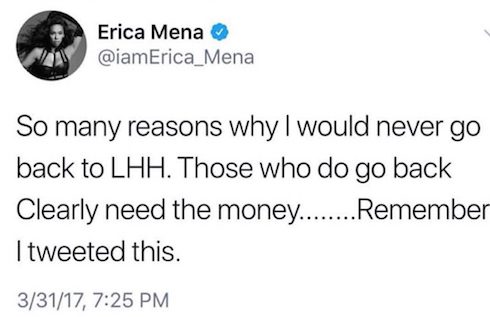 Since that tweet went viral earlier this week, the former LHHNY star’s been claiming it’s a simple photoshop job, with the implication being that the tweet never existed in the first place.

Photoshopped tweets and mad promo. Thanks ???

Judging by the response to that tweet alone, though, Erica’s fans aren’t buying it.

So, what is Erica Mena’s net worth? Most of the big celebrity net worth sites claim she’s worth somewhere between $350,000 and $400,000. It’s not clear where those sites are getting their information — but, if the figures are even generally accurate, a net worth in the mid-six figures is hardly close to broke.

Having said that, it seems clear that Erica Mena’s net worth is about to be bolstered by her new gig as a Love & Hip Hop Atlanta headliner. Her co-star Mimi Faust, for example, reportedly made a sweet $20,000 per episode for LHHATL’s first few seasons.

We don’t know for sure how much more Mimi makes now, but we do known that every single season of LHHATL from 2013 to today has had between 17 and 20 episodes. If that holds true for LHHATL Season 7 — and if Erica makes now what Mimi did back in the day — she’s looking at a payday of between $340,000 and $400,000, which would double Erica’s alleged net worth. (

Erica’s modeling profile is still active, though her highest-profile modeling days appear to be behind her. But, between leaving LHHNY and returning to the franchise with LHHATL, Erica did have a handful of acting gigs. Most notable among them were season one of VH1’s Scared Famous and the “Thanksgiving” episode of Master of None, both last year.

Meet Lola & Vanessa ( @noellerobinson ) ? Sisters in the movie ? MASTERS ( Lola owns a coffee shop & dance studio- Takes care of her little sister all while still pursuing her dream of dancing)

Beyond that, Erica’s also begun hawking several products — including the infamous Flat Tummy Tea — on her Instagram page. Based on Erica’s sizeable following of 3.2 million people, she likely commands a product placement fee of between $3,000 and $7,000 per post, depending on the length of the campaign and whether the posts are photos or videos.

Finally, no discussion of Erica Mena’s net worth in 2018 would be complete without recalling the 2015 interview she gave VH1 after saying goodbye to Love & Hip Hop New York. In that interview, Erica claimed she only joined LHHNY in the first place because she was being groomed to take the reins of a spin-off — presumably LHHTL:

What people fail to realize is that when I first got approached to do Love & Hip Hop it because I was supposed to be spinning off and becoming the headliner for [another Love & Hip Hop] city which wasn’t New York. I feel like me and the network have established a relationship so who is to say what could be next. I feel like I am built for this world and I’ve always been a very open person. The world isn’t done watching Erica Mena on TV and I know that.

You can praise or shade Erica in real time when Love & Hip Hop Atlanta airs Monday nights at 8 on VH1.