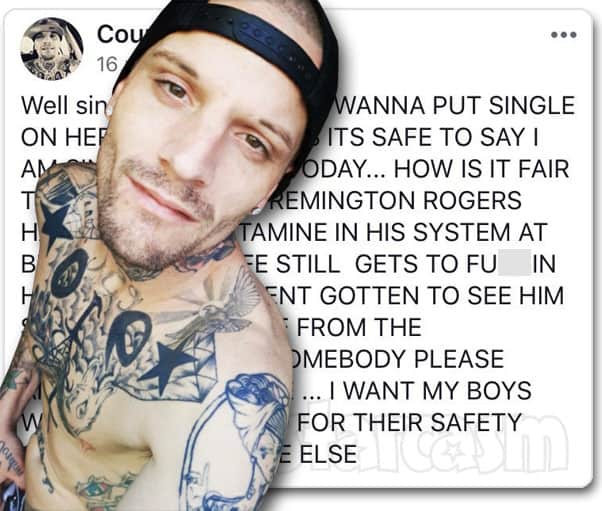 Jenelle Eason’s ex-husband Courtland Rogers welcomed his third child last month, his second with wife Lindsey Rogers. However, the joy of the baby’s arrival was marred by an apparent split between the couple as Courtland took to social media to make some very harsh allegations.

First, the good news. Kash Remington Rogers was born on Friday, November 22 at 7:05AM. He weighed 9 pounds, 7 ounces upon arrival. Both Courtland and Lindsey shared photos of little Kash on social media, and the two of them seemed to be getting along.

Earlier today, Courtland lashed out at Lindsey on Facebook and revealed that he has not been able to see his son since he left the hospital. Courtland also alleges that Kash had meth in his system when he was born.

Well since my LEGAL WIFE WANNA PUT SINGLE ON HER PAGE I GUESS ITS SAFE TO SAY I AM SINGLE STARTING TODAY… HOW IS IT FAIR THAT MY SON KASH REMINGTON ROGERS HAD METHAMPHETAMINE IN HIS SYSTEM AT BIRTH AND MY WIFE STILL GETS TO F**KIN HAVE HIM BUT I HAVENT GOTTEN TO SEE HIM SINCE HE CAME HOME FROM THE HOSPITAL ???? WILL SOMEBODY PLEASE ANSWER THAT FOR ME … I WANT MY BOYS WITH ME I AM SCARED FOR THEIR SAFETY AND LIVES ANYWHERE ELSE

Lindsey hasn’t responded to Courtland’s allegations directly on social media, but she did share a drawing of a man giving the middle finger that included the message: “To everyone who believes my ex.”

Lindsey hinted at some sort of potential health issue with Kash last week with a post asking for prayers for her newborn son. “Unspoken prayer request for baby Kash pleaseeee,” her post read, along with three blue hearts. She did not provide any additional details about why Kash needed prayers in the original post or in the comments.

Speaking of Lindsey and Facebook comments, she seemed to demonstrate that she still had feelings for her estranged husband in the comments section of a photo posted by Courtland on Sunday.

Someone named Spinney Nikki responded with the encouraging message: “Cheer up you have ur health and ur kids.”

Lindsey replied to that comment by writing: “Spinney Nikki ur such a stalker u always up his a**.”

The apparent break up is just the latest in a long string of issues for Courtland and Lindsey, including Courtland’s 2018 arrest for assault on a female after an altercation between the two.

Courtland revealed that Lindsey was pregnant with their second child, his third, back in May. Kash joins big brother Camryn Kruze, who was born in March of 2018. Courtland also has an eight-year-old daughter named Jordan (aka JaJa) with his ex Taylor Lewis.

#TeenMom2 Jenelle's ex-husband Courtland Rogers announces wife Lindsey is pregnant again just 2 months after he was released from jail for assault on a female. Plus, Courtland responds to MTV "firing" Jenelle with a series of gleeful tweets. https://t.co/Z2weeMlGO1

In addition to the 2018 assault charge, Courtland has been arrested at least four times over the last couple years on drug charges and a probation violation. Courtland talked at length about his struggles with drug addiction and the impact it has had on his life and those around him in a lengthy Facebook post back in July. Courtland stated that he has been to prison (not just jail) four times, and he said he has been to 17 different treatment centers to try to overcome his addiction issues. In total, Courtland figured that he had spent 7 of his 33 years either behind bars or in rehab.