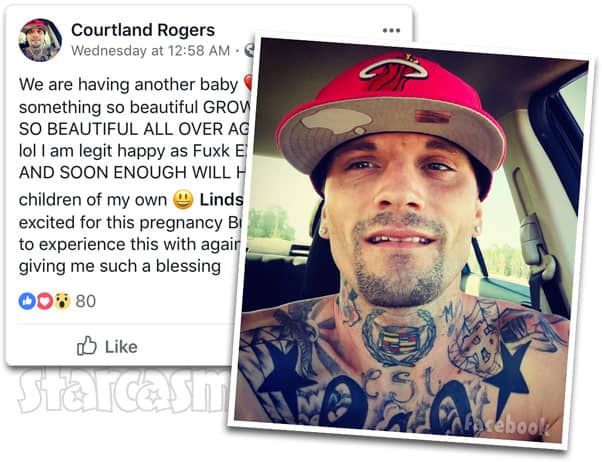 The ex-husband of ex-Teen Mom 2 star Jenelle Eason is going to be a dad again! Courtland Rogers made the announcement earlier this week that his wife Lindsey Rogers is expecting their second child together.

“We are having another baby ❤️,” he wrote on Facebook on Wednesday. “I get to watch something so beautiful GROW IN SOMETHING SO BEAUTIFUL ALL OVER AGAIN…YAYYYYYY lol.”

Courtland continued his announcement, completely unable to contain his joy: “I am legit happy as F**k EXCITED AS F**K AND SOON ENOUGH WILL HAVE 3 beautiful children of my own ? Lindsey Rogers I am so excited for this pregnancy Bubs …. I cannot wait to experience this with again with u. Thank u for giving me such a blessing.”

For 408 days Now i have been able to watch u grow into one of the most dedicated mothers I have ever known AND it’s to OUR SON !!! And we have a BEAUTIFUL PRECIOUS LITTLE SOMEONE growing inside of u and to think I already know that they’re going to have such a special life with u as they’re mother and they don’t even kno it yet but I do I know because I watch u with our son I am beyond thankful to have u in my kids lives and will forever have your back as papa bear I love u Bubs. To Pluto and back . I got a surprise for u when U are ready for it ❤️ happy Mother’s Day mama bear Lindsey Rogers

PS our son is already 408 days old and that went fast …: help me slow it down some babe lol gosh our little man is growing up quick and his little brother or sister (sister ??) will b here before we know it I will be sitting their telling u to PUSHHHHHHH lol I cannot waitttttttt u are my bestfriend I love u babe

It seems Courtland wasted little time expanding his family after being released from jail on March 6. He was serving six months for assault on a female, his fourth arrest of 2018.

The female that Courtland assaulted was his wife Lindsey. For that arrest, police had probable cause to believe that “Courtland had brutally attacked a woman named Lindsey Frazier on Sunday by allegedly slapping her, dragging her by the hair and pulling her hair out. The magistrate also says Frazier credibly alleged Courtland had threatened her and her family’s lives … and threw her phone against a wall to prevent her from calling 911.”

Lindsey must have faith that Courtland is truly rehabilitated this time.

The newest Courtland offspring will join one-year-old big brother Camryn Kruze and older sister Jordan (aka JaJa), who is either 7 or 8. Camryn is his son with Lindsey, while Jordan is his daughter with ex Taylor Lewis. Courtland did not indicate just how far along Lindsey is or her due date.

In addition to making the pregnancy announcement, Courtland also could not resist responding to MTV firing his ex-wife Jenelle Eason after her current husband David shot and killed their French bulldog Nugget. “She’s Just a regular Brunswick county chic again I guess AND stuck to Abraham Lincolns nephew for the rest of her life lmfaooooo,” he tweeted on Wednesday, after MTV announced they were not filming Jenelle for the upcoming season.

Courtland followed that up with a very schadenfreudian tweet in which he laughed at length before taking a breath and continuing to laugh. The gleeful tweet drew numerous reactions — some of them supportive, some of them critical. Here is the OG tweet along with some examples of the criticism, as well as Courtland’s responses:

Given his track record, Courtland certainly has no room to make fun of Jenelle or anyone else. I hope he didn’t jinx himself with those tweets, and I hope he has finally gotten his life on track and will be able to be a stable figure in all of his children’s lives. Only time will tell.

PHOTOS Jenelle Evans is out of rehab again, already fighting Courtland on Twitter