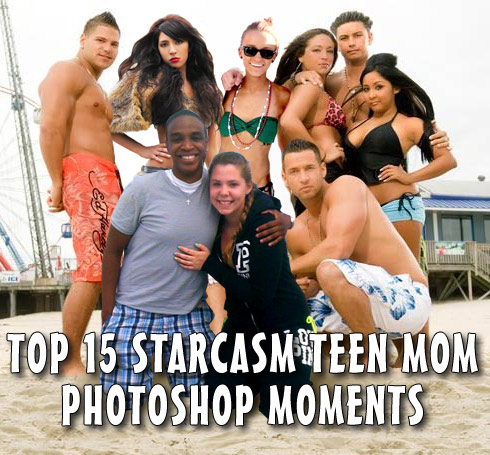 Tonight is the season finale of the third season of everyone’s favorite young momma drama series Teen Mom, and in honor of the show’s success (as well as it’s sister show Teen Mom 2) I thought I would sift through some of the virtual filing cabinets here on my computer and gather together some of my favorite altered images from our rather extensive coverage of the show.

I really can’t tell you how many Teen Mom articles I’ve written over the last few years, and as starcasm’s resident computer graphics guy, I can’t tell you how many photos of these young ladies (and their significant and insignificant others) I have manipulated in an attempt to give those stories a little more entertainment value. I was shocked at the number of images I had to wade through, and was even forced to expand this post from a Top Ten list (as originally planned) to less palpable Top Fifteen because there were so many.

So what determined the rankings? There weren’t any specific guidelines really. I thought about figuring in how popular they were with our readers, but a lot of times whether or not people saw them was more tied to what the article was about rather than the image itself. So, I just compiled a list and sorted them out based on my gut reaction – looking back, which ones did I like best – for whatever reason.

Anyways, without further ado, I give you the first half of my “Top 15 Starcasm Teen Mom Photoshop Moments” with a small image and a description of each. (Just click on the photo to see the original image and post) 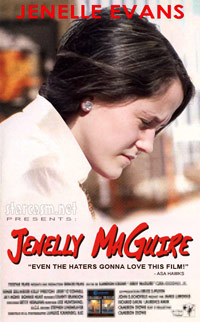 This is the first of many fake movie posters/DVD covers to make the list, and was inspired by Jenelle Evans’ two-month stint in a California rehab facility. “What does Jenelle staying in a rehab facility have to do with Jerry Maguire?” you ask? While there she met a another young lady named Julia who is a singer/songwriter. Her talent impressed Jenelle so much that she recorded videos of her singing, uploaded them to Youtube, and began promoting them to her fans – basically assuming the roll of Julia’s agent.

I realize that it was a bit of a leap connecting music to sports, but hey, this is number 15 after all! (Besides, this is so much better than the Jenelle/Nelly CD cover I did after Jenelle posted a rap video from rehab.) Not to toot my own horn, but I think my favorite part about the photo is the tagline from yours truly, “Even the haters gonna love this film!” 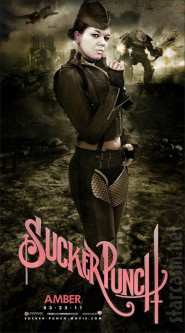 This is the only image on the list that never actually made it into a post. To be honest, I can’t remember exactly which story I did this for, but I assume it was one of the many times Amber got into a bit of trouble for “sucker punching” Gary. I’m thinking this one may have been nixed by an editor due to the sensitive nature of domestic violence, but I’m guessing they won’t have an issue if it’s completely out of context like this 🙂

Just in case you didn’t know (because the movie was a total bomb at the box office) this image is based on the character poster for Amber from the film Sucker Punch. I like the photo a lot because Amber looks like a total badass, which of course is not really a good thing given her serious anger management issues, etc. But, that being said, this might be the only one of the many Amber images I’ve done that she would actually love! So here you go Amber, I expect this to be your Facebook profile photo when you do finally get a Facebook account! (By the way, is that a Garybot in the background?) 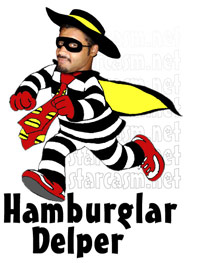 In many worlds this one may have very well come out on top of the list! Not only does it feature ingenious wordplay but it also references the incomparable Kieffer Delp, the most iconic secondary character from either Teen Mom series (with the only possible exception being Tyler Baltierra’s dad Butch.)

This photo requires a little bit of a set up, and I think it’s this inherently complicated nature that prevented it from landing higher on the chart. First off, the term “delper” is something our site has been diligently trying to add to the English language for months. Our writer Darren O first introduced it in his post about one of Kieffer’s numerous arrests, and he definied it this way:

Delper: N. “A young man who is nothing but trouble. A parent’s worst nightmare.”

OK, so we’ve got that. Now, all you have to do is add in Kieffer’s arrest in August for stealing meat from a grocery store and the result is…

Hamburglar Delper! (Our staff shed many a tear laughing over this image. It also made us want McDonald’s, but that’s beside the point…) 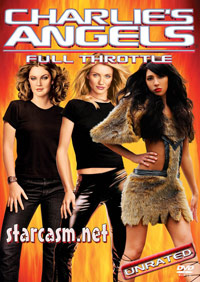 As it turns out, it was all a slight misunderstanding. Farrah had gotten a role as an extra on the new Charlie’s Angels television show on ABC. But, that didn’t stop me from adding Farrah to the famous Charlie’s Angels: Full Throttle movie poster alongside Drew Barrymore and Cameron Diaz! (Sorry Lucy Liu – but because of Farrah’s pose she needed to be on the right.)

Speaking of pose, if you don’t recognize Farrah’s furry photo then you must not have seen her famous appearance in the “Mastering the Art of American Motorcycles” 16-month calendar in which she wore a Little Red Riding Hood inspired outfit that she helped design!

***In the original post I also added an image of Farrah Abraham in a poster for the new television series as well as some stunning visual evidence of Farrah’s previous familial connection to the original ’70s TV show! 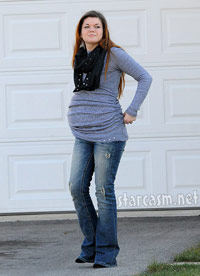 I created this fake pregnant Amber Portwood image for one of the many times tabloids were reporting the Anderson, Indiana teen was pregnant again – something they used to do about every three weeks back in the day.

The image isn’t very shocking nor is it all that funny, but makes the list because of how prevalent it became on the internet. Each and every time one of those afore-mentioned “Amber Portwood Is Pregnant Again!” rumors sprang up, sites would grab this image for their stories – trimming off the starcasm logo most of the time.

I’d also like to use this image to point out something about these Photoshopped images. It doesn’t matter how ridiculous or supernatural I make them, invariably someone has to leave a comment with their insightful breakthrough, “You are all stupid! This image is Photoshopped! Duh!” (Or something along those lines.) I’m using this image to mention that because it is one of the few that could have been misconstrued as real, but in these cases I always state very clearly in the post that the image has been altered and is not real.

I really, really, really liked this one because it was just so subtle and perfect. It was on the heels of the news breaking that Jo (Kailyn Lowry’s ex) had been arrested for some ridiculously minor infraction and had to spend the night in jail. All I did was take one of the many, many, many screen caps of Jo (Kailyn Lowry’s baby daddy) looking forlorn and morose (which also had the added bonus of a bleak, prison-like backdrop) and changed his clothes to orange. That was it! The look on Jo’s face is absolutely immaculate!

Oh, and speaking of people thinking an image was real! Whew, this one generated all sorts of “That’s fake” tweets and comments! (We even had diligent folks pointing out that it was fake because there was a baby carrier on the bench and you could see Kailyn’s purse in the foreground.) The post had a disclaimer about the photo, but I had to change it to basically a second headline at the top of the post letting folks know that it was fake.

This was one of my first goes at creating an animated gif, and I’m embarrassed to say it gobbled up most of one of my Saturdays. That being said, I couldn’t be prouder of the results!

The animation didn’t really have a story to go with it, I was just inspired by these images of Jenelle Evans on a McDonald’s run combined with reading soooooo many negative comments about her and the other girls. Ironically enough, the image itself garnered numerous angry comments directed at us because me made Jenelle appear fat – which would probably cause her to be self conscious about her weight and develop an eating disorder. (No joke!) We had to add to the post explaining that the graphic was a play on an internet meme of a similar “haters gonna hate” animated gif featuring a black and white drawing of a chubby little boy. (You can see the original animation HERE.)

I just love Jenelle’s attitude – I think it fit her perfectly! I only like it more now that she seems to be getting her life in order and on track!

Stay tuned for Part 2! I should have it up by tomorrow at the latest!