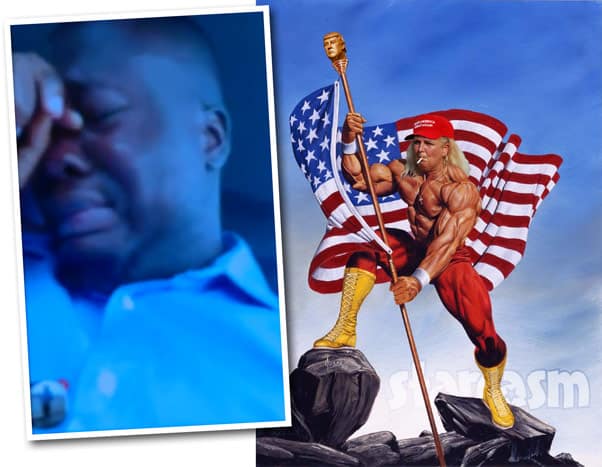 Before the 90 Days elder Angela Deem and her BJ-doin’ fiancé Michael make their 90 Day Fiance debut tonight as viewers will get to see the couple’s experience going through the K-1 visa process.

In a preview trailer for the new season, we see Angela consoling a crying Michael during a FaceTime conversation. Are those tears of joy for Michael after getting the news that he is coming to America? Or is that the heartbreak of denial?

Time is running out and the pressure is on! These new couples have only 90 day to get married or pack their bags. Tune in to the season premiere of #90DayFiance Sunday at 8/7c. pic.twitter.com/Dcvtg1u73u

“Michael, do you still want to get married or no?” Angela asks. The scene cuts to Angela saying “It’s painful.”

In another preview clip, Michael appears extremely confident heading into his K-1 visa interview — a sentiment not shared by Angela:

“Michael, what’s going on with the interview?” Angela asks. “Did you go get everything we needed?”

Michael answers in the affirmative as he lists the things he has prepared. “Everything’s ready,” he assures her. “We will be fine. There will be no problem.”

“You’re not nervous about the questions?” Angela asks incredulously.

Michael admits that he is nervous, but he says that he just has to be strong.

Angela remains cautious. “Michael, let me tell you something I’m worried about. If you’re putting on a damn show, they gonna know it, and you’re going to be denied.”

After Angela and Michael do a little bit of their trademark antagonistic conversatin’, Angela summarizes her concerns for the TLC cameras:

This interview is the last step to get the K-1 visa approved. It’s a “yes” or a “no” to come to the States. He has to bring all kinds of documents, proof of our relationship, and they’re going to ask some questions about me and my family. So if he doesn’t take this seriously, the government officials will not take it seriously, and his ass will be denied!

So, was Michael’s K-1 visa approved or denied? We spoke with a production source last week who informed us that it was denied. However, we were unable to confirm the report.

This week, Instagrammer @FraudedByTLC (aka Katrina) shared a similar update with potential bad news for #Michaelangela. “I have not been able to verify this yet, but I have heard from multiple sources his visa is denied,” Katrina wrote earlier today.

One commenter replied by stating he heard the opposite, and that Michael was crying tears of joy in the preview clip after Angela told him he was going to be able to come the the US. Katrina iterated that she has not been able to confirm the denial, and she added: “Some people are saying he is here in the States, but I have not been able to verify that either (I.e., no pictures of him spotted).”

Former 90 Day Fiance cast member Jason Hitch entered the conversation and reveals that another cast member concurred with the denial report. “A current cast member called me the other day checking in with me,” Jason commented. “His name got brought up. He said he was denied and Angela was brought on this season because the current cast sucked.”

Just days after airing Angela Deem's HUGE blow up at the #BeforeThe90Days #CouplesTellAll, @TLC reveals that she and Michael will be right back on TV this Sunday as new additions to the cast of #90DayFiance Season 7! Visit Starcasm.net (article link in our stories and 90DF highlights) to watch the new preview trailer with Angela and Michael! Plus, get all caught up on the behind-the-scenes drama after Angela's cast mates @o.m.a.ver.y and @tlc_90day_rebecca claim Angela and her daughter attacked Avery's mom during the Tell All and TLC chose not to air it! (I was wondering why TLC would leave that out, but now it makes sense. There would definitely be far fewer members of #TeamAngela if they showed her hitting Avery's mom! And that wouldn't be good less than a week before announcing she was joining 90 Day Fiance.)

The circumstantial evidence certainly seems to suggest that Michael is not currently in the United States, whether that is because his K-1 visa was denied, or for some other reason. For example, the 90 Day Fiance cast was in New York City this weekend to film the Couples Tell All, and neither Angela nor Michael are present in the photos and videos shared by the other cast members.

Some might argue that TLC would not allow photos of them to be posted so as to avoid any potential spoilers, but we see Mursel, Jasmin, Juliana, Syngin and Sasha — confirming that they all got married and remain in the country. Of course, given Angela’s history of getting into actual physical altercations at the Couples Tell All specials, it could be that she filmed her segment separately.

Personally, I simply CANNOT believe that if Michael was/is in Hazlehurst, Georgia that we wouldn’t have seen a photo or video of him posted online by a local! Hazlehurst is a very small town, and Angela is probably the second most famous person living there, behind wedding planner DJ Doug. And Angela seems too tied to the town to move somewhere else. (Someone’s gotta look after her grandkids while their mom Scottie Deem serves out her prison sentence for child molestation.)

As for now, I suppose the only way to find out the fate of Michael’s K-1 visa status for sure is to keep tuning in for new episodes of 90 Day Fiance airing Sunday nights at 8/7c on TLC!