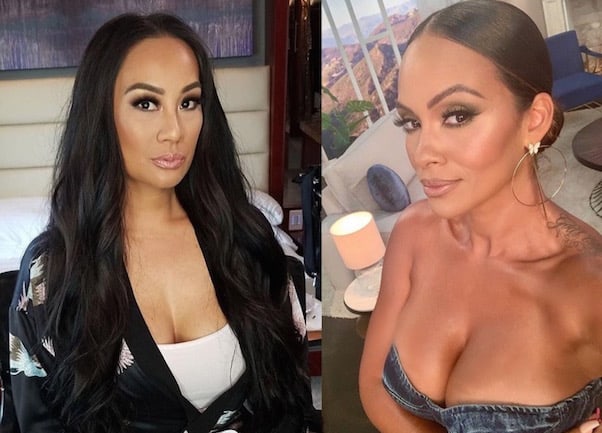 There’s been no love lost between CeCe Gutierrez and Evelyn Lozada on this season of Basketball Wives. Now, with CeCe likely set to depart the show, she’s saying what she really thinks about Evelyn — and about whether she and Kristen can ever reconcile.

CeCe made her latest remarks in a new interview with The Domenick Nati Show, and, while she kept her cool throughout, she was also straightforward when asked to name both the least trustworthy person in the cast and her own least favorite cast member. Unsurprisingly after Basketball Wives Season 8, Evelyn’s name came up in response to both questions.

Before we get to the tea between CeCe Gutierrez and Evelyn Lozada, we should point out that Basketball Wives has reportedly been renewed for a ninth season, to debut sometime in 2020. So, while CeCe has previously said that she’s “done” with the show — she wasn’t even invited to film the Season 8 reunion — it’s also possible that she’s continuing to stir things up between herself and the rest of the cast, should she decide to return. (More on that in a moment.)

As expected, CeCe and Evelyn’s feud gets the interview’s first couple of questions.

On which “I’d have to say Evelyn. She showed me that it doesn’t matter in her eyes who’s involved; she’s just gonna blurt it out and cause drama. The last scene says it all. Things got brought up that happened already, that was in the past, and because she just felt like bringing it up — she had no business bringing it up, because it had nothing to do with her….Everybody things that it’s OG that is preventing Kristen and I from making amends, but it’s really [Evelyn].”

However, when asked which Basketball Wives cast member “changes the most when the cameras are on,” CeCe went in a different direction. That person, she says, is Kristen — which CeCe says is because she knows Kristen the best off-camera, where she never acts the way she does on the show. CeCe explained that Kristen is “confrontational” on-camera, whereas off-camera she’s “the kind of person who just lets things go. She’ll say ‘Oh, she’ll just get over it.'”

Elsewhere in the interview, CeCe confirmed that she and Kristen “are not on speaking terms still.” She said that she would accept Kristen’s apology — but doesn’t know “if [their] relationship would be the same” afterward.

“And we don’t know what’s gonna happen,” CeCe went on. “We may stay like this forever; I don’t know. But we’re not on speaking terms right now, which is really unfortunate.” (One related side note: CeCe and Byron Scott aren’t scheduled to be married until next year, giving CeCe and Kristen plenty of time — and opportunity — to reconcile.)

Finally, CeCe played it a bit coy when asked if she’ll return for Basketball Wives Season 9. Though earlier this summer CeCe sounded like she was as through with the show as now-former star Tami Roman, it seems CeCe may have since changed her tune:

You know, to be honest, I don’t know if I’m gonna becoming back. Right now, it’s a little up in the air. I had a lot of ups and downs — a lot of downs (laughs), more downs than ups. But there were a things that were just kinda rocky with me, that left a bad taste in my mouth. So, at this point, I’m not quite sure if I’m coming back or not.

The Basketball Wives Season 8 finale airs tonight at 8 on VH1.