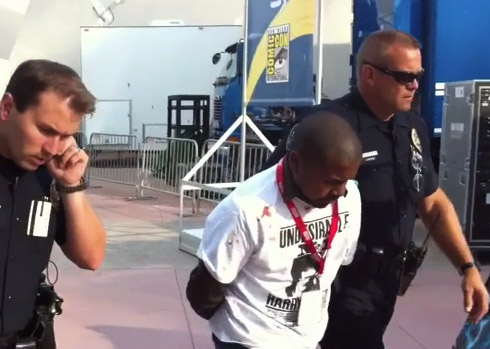 It was all fun and games until somebody got hurt.

In between San Diego Comic-Con 2010 panels for Resident Evil: Afterlife and Marvel, two men got into a dispute over a seat. According to Dread Central, one of the men refused to change seats and as a result he was stabbed in the eye with a pen!

Also according to the site, which has been blogging live from Comic-Con throughout the event, “the victim has been stretchered out and the attacker (both adults) has been removed from the convention center by police in handcuffs, his exclusive Comic-Con Harry Potter T-shirt soaked in blood.”

Here’s another photo of the suspect being escorted away by police:

UPDATE – Now there’s a video clip of the Harry Potter Stabber being taken away!

The incident occurred in Hall H and after a delay Harrison Ford came out on stage wearing handcuffs and escorted by police for the Cowboys & Aliens panel! Too soon?

I blame the guys wearing green shirts in this next photo because apparently they weren’t doing their jobs:

Here’s an animated gif reenactment of the stabbing by Heroes and Star Trek star Zachary Quinto:

That’s why you should wear safety goggles like this woman:

Or better yet, you could show up like this dude:

VIDEO Tommie tries to throw down on Karlie Redd, but six pesky security guards get in her way