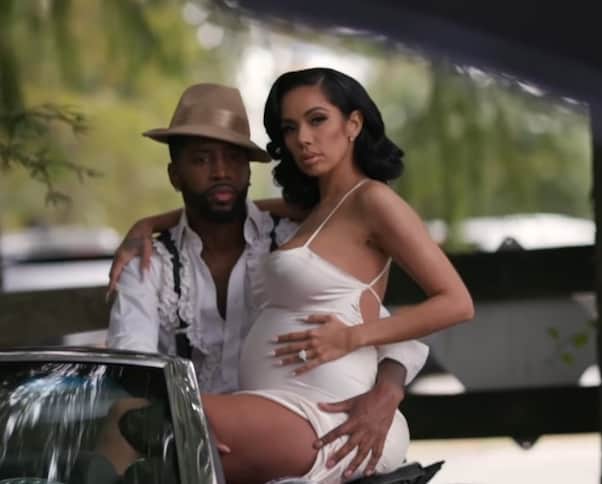 The worst-kept Love & Hip Hop secret since Jessica Dime’s pregnancy is finally confirmed: Erica Mena is having a baby with Safaree Samuels! After literally months of pregnancy gossip and alleged baby bump sightings, VH1 spilled its own tea last night by sharing a pair of new video clips featuring Erica and Safaree discussing their impending parenthood — and potentially confirming Erica Mena’s due date.

So, before we get to the gossip about when Erica is due, let’s take a look at the first of the two pregnancy confirmation clips. Though they seemingly came out of nowhere — Erica doesn’t *appear* to be due in the immediate future, and <em>Love & Hip Hop New York Season 10 likely won’t debut until next year — there’s actually a very practical reason why VH1 dropped the videos when they did. According to numerous reports, Erica and Safaree are getting married this coming Monday, October 7th, in a grand New York City ceremony at a still-undisclosed location. The minute the ceremony starts, social media is going to be flooded with surreptitious pics and videos of the happy couple — and every one of them will show Erica’s baby bump in all its glory.

In order to stay in control of its own narrative, then, the network released this short video:

In fact, the video is mostly about how Safaree’s responding to the pregnancy: he’s in “shock” and “disbelief”; he’s been watching videos of puppies being born so that “if nine or eight babies come out” of Erica, he’ll be ready for it; he has a weak stomach and fainted while in the room when his sister gave birth.

Erica says she and Safaree are going to be “selective” about posting baby photos on social media; Safaree says they’re putting their baby to work immediately: “I was working at a very young age. This baby, as soon as it comes out — it’s working.”

As for Erica Mena’s due date? The most recent relevant gossip regarding Erica’s then-alleged pregnancy came about in early July, when fans thought she was maybe showing. A month and a half later, Erica was almost definitely showing at the MTV VMAs. And she’s clearly been using pre-pregnancy photos on her social media in the weeks since.

Depending on exactly when in her pregnancy she started showing, then, Erica could be anywhere from late in her first trimester (meaning a July conception and a March / April 2020 birth) to around halfway through her pregnancy (a May / June conception and a February 2020 birth) to the very beginning of her third trimester (suggesting she conceived in April and will give birth this coming January).

As soon as VH1 shared the clips, Erica took to social media to share a few photos from her and Safaree’s pregnancy photoshoot:

God knew my heart needed you. Thank you to my brother @mr_guerra & @blu_gem_ for helping bring this to life.

Erica and Safaree’s photographer, New York-based Jose Guerra, also shared a few different photos from the same session (some of the footage in the clip above, along with the screengrab at the top of the article, was filmed during this part of the session):

The couple has yet to make their baby’s gender public. But we mentioned two baby confirmation clips above, and here’s the second: in which Erica and Safaree try and repeatedly fail to reveal whether they’re having a boy or a girl. At this point, all we can say for sure is that they’re not having six babies, they’re not having a white baby, and they’re only metaphorically giving birth to money:

Congratulations to Erica and Safaree! Love & Hip Hop New York‘s 10th anniversary season is expected to debut in the winter of 2020, possibly around the same time as the couple’s child.

Gabrielle Union gets honest about fertility struggles: If it does happen, it’s a miracle