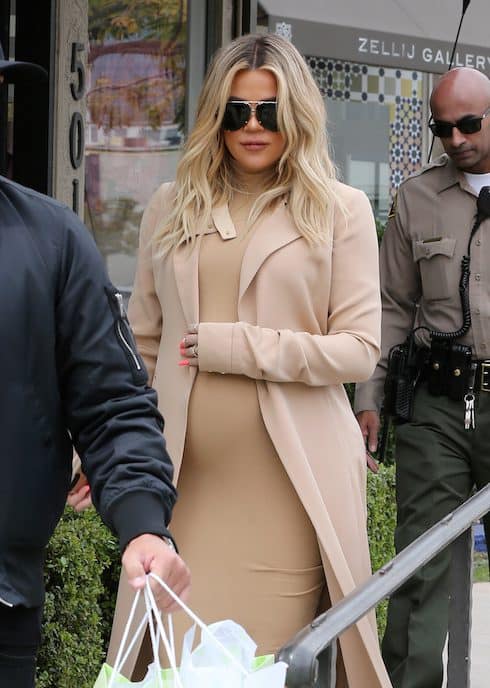 It seems that Khloe Kardashian may have forgiven baby daddy Tristan Thompson for his cheating ways. But are Khloe and Tristan still together? Just days after the Kardashians reportedly left Cleveland in a huff over Khloe’s decision, Tristan doubled down on his own controversy by crying foul over how he’s being treated.

Khloe allegedly feels “stuck” in Cleveland at least until Tristan gets bumped from the NBA playoffs and the two of them can have a real heart-to-heart. But Kardashian home network E! has already reported that Khloe is willing to look past Tristan’s rampant infidelity for the sake of their daughter, True.

Khloe “has a bid heart and is very forgiving,” an anonymous source close to Khloe explained. “She doesn’t see herself as a single mom at all. She’s taking one day at a time and doing the best she can for her daughter.”

The source added that Khloe seems to think she and Tristan can “make it work.” But that decision appears to have the rest of Khloe’s family up in arms: the Kardashians are “very angry with Tristan and having a hard time coming to terms with” Khloe’s forgiveness, said the same insider. (E!’s article ran just as Kim Kardashian was telling Ellen DeGeneres that the situation with Tristan is “so f*cked up.”)

On that note, In Touch’s take went full Kardashian schism — the site claims to have it on good authority that Khloe’s family made an abrupt about-face and headed straight back to Calabasas as soon as Khloe gave birth on April 12.

“The trip wasn’t supposed to be so short,” says their article. “But tensions between the new mom and her family exploded during the visit…the Kardashians blew up at [Khloe], then decided to leave.”

In fact, that take suggests things have gotten so bad there’s an ultimatum on the table. “It’s Tristan or us,” says the second insider.

Finally, Tristan appears to be making things difficult for himself by getting his own anonymous insiders to lament the way he’s been portrayed over the last few weeks. According to Hollywood Life, Tristan “genuinely feels bad about making a huge mistake with Khloe,” and is outraged that Kim addressed the topic on Ellen.

“Tristan is in the middle of a playoff run,” said the final insider, “and having Kim shade him publicly is not good for him or his team. He feels she’s messing with his NBA championship which is not cool at all.”

As of this writing, Tristan has played a total of 47 minutes across the seven games of the Cavaliers’ first-round playoff series against the Indiana Pacers.

(Photo credits: Are Khloe and Tristan still together via Clint Brewer / Splash News)