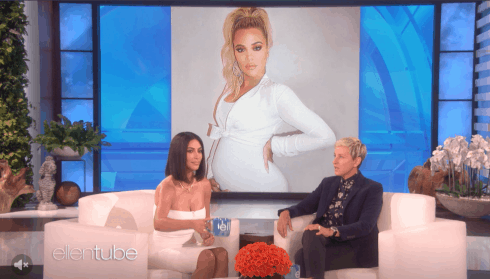 Ellen DeGeneres put Kim Kardashian in the hot seat for Monday’s episode of Ellen. In the sneak-peak videos below, we see the celebrity confronted with the difficult topics of sister Khloe’s boyfriend Tristan Thompson cheating scandal erupting just as she was giving birth to their child — and, of course, Kim’s husband’s recent manic Twitter flurry.

The things we learned from this interview include that Kim finding it hard not to cuss over Tristan’s behavior (even on national TV!), and that she had no idea Kanye was even back on Twitter until his headline-grabbing social media antics were well underway.

Regarding Khloe and Tristan, Kim told Ellen “Like I don’t even know how to describe it besides it’s just so f–ked up. We really were rooting for Khloe, and we still are…you know, she’s so strong and she’s doing the best that she can. It’s a really sad situation all over.”

Kim said that she’s made a pact with her brother Rob Kardashian to keep conversation “cute” and “classy” when a scandalous situation involves a child. “Because one day True’s gonna see this and you know…it’s so messed up.”

Find out why Khloe Kardashian named her baby daughter “True.” 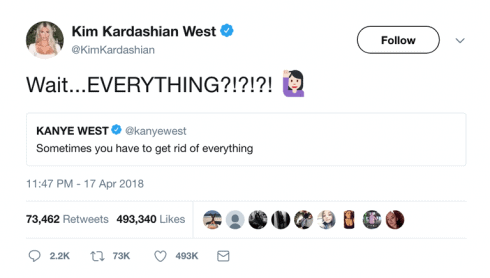 As for Kanye West’s avalanche of controversial tweets, Kim insisted she didn’t even know that her husband was back on Twitter after his eleven-month hiatus.

“I didn’t even know he got his Twitter again until I started seeing tweets come in from other people like, retweeting them,” she explained. “And I was like, ‘Wait, is this real?’ And then at night, he came in and was like, ‘Did you see my tweets?’ And I was like, ‘Yes, I did see your tweets.’ And I followed him back.”

There have been so many tweets that it’s hard to even keep up with everything Kanye’s been saying, but Kim did break down what he meant by one tweet that she very publicly replied to. In one of his many aphorisms, Kanye declared “Sometimes you have to get rid of everything,” to which Kim cheekily replied, “Wait. . . EVERYTHING?!?!?!?”

She explained that what she thought he was echoing something he said to her about them not having their phones when they were spending time with their kids in the morning. “It’s our rule that we really try to live by. So I think he was talking about cleansing,” she explained.

Another tweet Kim responded to what when Kanye started posting photos of their house. Her response had a light air to it, but Kim also revealed that the couple had an agreement not to show photos of their home to the public. She suggested that since he broke that rule maybe they could allow her reality show cameras in the house.

Ummm babe. We had a rule to not show our home on social media! Soooo can we now allow KUWTK filming in the home? ?? https://t.co/bUMAn29K5K

There are also reports circulating that there was one tweet in particular that Kim’s REALLY not fond of, and it involves Tristan, not Trump. In the light of reports of Tristan cheating on her sister with multiple women while she was pregnant, Kim allegedly doesn’t approve of Kanye tweeting a supportive message about Tristan, who plays for the NBA’s Cleveland Cavaliers.

that’s the last tweet of the day. I did that one for my god-brother Puff. Now ima go watch the Cavs.